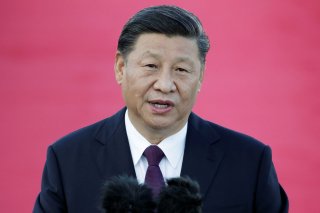 The world will never be the same after COVID-19—not because people sheltered in place and reacquainted themselves with traditional family bonding—but because China opened a new front in information warfare. This front is global in scale and one that Beijing has laid the groundwork for a decade prior to the pandemic. As it unravels, it underscores one fact that we already know: that the world, especially truly-functioning West democracies, continues to fail in responding to Chinese global statecraft that may threaten civil liberties as we know it.

Information warfare precisely poses this threat, where those on the receiving end of damages are primarily a nation’s populace, the government, and its military, arguably in that order. Contrary to the West’s popular conception of war since World War II, the twenty-first-century has introduced new rules of warfighting where kinetic military movement has become merely secondary to achieving victory. Rather, the employment and protection of information flow is paramount.

The problem today is that ordinary citizens—regardless of nationality—are utterly unaware of this threat. In an era where life’s comforts can virtually be achieved through the speed of a smartphone tap, what is there to be scared about from information technology? Terrorist bombings, mass shootings, or an epidemic are more of an existential risk than strategic harm. Yet, both governments and non-state actors such as terrorists draw their legitimacy from the people.

WHAT IS INFORMATION WARFARE?

Adding insult to injury is that both in and out of military circles there is a potpourri of different definitions of the term information warfare, which is sometimes referred to as shadow war. But one that perhaps lends itself to effortless appreciation is what Dan Kuehl from the U.S. National Defense University refers to as “a conflict of struggle between two or more groups in the information environment.” As the Xi Jinping Thought guides Beijing to “open up and advance theoretical, practical, and institutional explorations,” it is likely that China subscribes along these lines with Chinese characteristics.

The stark ideological contrast between China and the United States along with the world’s democracies is common knowledge. But before the pandemic, the lure of new money from China was becoming increasingly impossible to resist.

In the middle of the 5G controversy and Washington’s bid to keep China out of America and its allies, London decided in January 2020 to allow Huawei to take part in their country’s 5G mobile infrastructure, even though the British government implies that the Chinese company is a “high-risk” vendor. Just days later, Italy—the hardest hit by the pandemic with over 14,000 deaths as of this writing—declared the year 2020 as China-Italy Year of Culture and Tourism, supposedly a year-long celebration of half a century of China-Italy diplomatic ties that brought considerable Chinese tourist spending in the country. Indeed, in 2019 tourism exceeded EUR 650 million ($720 million), a 40.8 percent year-on-year increase.

Given Beijing’s long history of employing its propaganda machinery to achieve strategic ends, this was certainly a narrative that China had an upper hand it would logically desire to maintain. But no other country has such preoccupation with preserving national unity that it is a reflection of the Chinese Communist Party’s (CCP) emphasis on information flow. Although Beijing may have succeeded in brainwashing its people into forgetting the Tiananmen Square massacre, the world does not.

Rightly so, spreading misleading information through propaganda on a global scale is relatively new territory for the CCP. Nevertheless, it appears that it has no choice given how it lost face in a series of indictments: the concealment of the outbreak’s extent; underreporting; cover-up of asymptomatic cases that tested positive for COVID-19; and selling defective test kits and substandard face masks to countries like Spain (10,935 deaths), Netherlands (1,487 deaths), and Turkey (425 deaths).

Beijing is noted for both its hybrid computational and traditional propaganda, which it has long employed in its own self-contained realm of domestic societal order. But as China’s influence grew, it sought to find ways to manage global perceptions in order to advance its own interests more effectively.

Unlike domestic brainwashing, influencing global narratives proves to be more complicated and we have seen the CCP’s global information warfare sputter as it shifts between Italy and the America in deflecting blame for the pandemic. But Beijing arrived on the global information frontline prepared, notably with valuable experience from their repeated information attacks on Taiwan over the years in order to influence the latter’s political landscape. This also includes their build-up of forces on social media that is orchestrated by Chinese online marketing firms, at times involving entrepreneurs with previous work experience inside Beijing’s foreign propaganda department.

Twitter is well aware of China’s influence operations. They have suspended 5,000 suspected Chinese state-controlled accounts and released data about them. ProPublica has analyzed the Chinese government’s covert attempts to wield influence on Twitter and has tracked millions of interactions between 10,000 suspected fake accounts with an interrelated network of more than 2,000.

These information operations occur during working hours in Beijing, some of which had been traced to Beijing-based internet marketing company, OneSight, that won a $175,000 government contract to increase the Twitter following of the CCP’s China News Service.

IT DOESN’T MATTER IF NOBODY BELIEVES CHINA

Going beyond subtle manipulation on social media, Chinese diplomats have ostensibly been deployed on the information trenches as the information environment outside China’s borders is considerably hostile to the CCP. But for the Chinese who are members of a society that has existed for thousands of years, they think in fundamentally different time scales. They view history as a cyclical process of decay and rectification and they can be expected to grow in harmony with the global information landscape rather than completely master it.

So it doesn’t matter if nobody believes China. They would logically expect that soon enough it will no longer matter that COVID-19 came from Wuhan along with their illicit wildlife trade. After all, the World Health Organization rightly urges that disease names may not include geographic locations such as cities, countries, regions, and continents.

The CCP believes everything will normalize under the context of Chinese benevolence to the world. Beijing’s charm offensive will then continue with Chinese technology giants such as Huawei leading the charge—a company with direct involvement with the CCP’s public security bureaus and police forces in Xinjiang that commit human rights violations and surveillance against the Uighurs.

Lee Kuan Yew assumed that America—the world’s best counterweight to China—will be displaced in the western Pacific, but not in the world. But even this world role is increasingly becoming complicated, as evidenced by the National Basketball Association’s (NBA) acquiescence to Beijing after Daryl Morse’s “improper remarks” on the Hong Kong protests were noted by the Chinese Basketball Association (CBA). Once again Chinese money talks as the CBA pays $300 million to stream the NBA in China.

THE WORLD CAN MASTER CHINA

Nonetheless, there is a light at the end of the tunnel so long as the world’s democracies pursue the following. First, give Taiwan a voice as a world model for countering Chinese information attacks. Second, uphold freedom of speech and the press. Third, counter Chinese economic stranglehold by supporting developing countries who are willing to diversify the global supply chain. And fourth, truly act on reputable studies like this one from the Australian Strategic Policy Institute that maps China’s electronic surveillance and employment of artificial intelligence.

If the CCP understands it cannot master the world, the world can master the CCP and China. At the same time, America—the leader of the free world—must decouple itself from the false illusion of a durable Pax Americana. Given the world community’s differing versions of world order, what we now have is a durable disorder.

Washington must begin to reimagine national and global security in longer time scales, one where the Chinese have been present for millennia. Real threats to the free world—whether a pandemic or the prospect of war—have demonstrated that a bipartisan consensus is possible, and that political polarization can converge towards the center. Given China’s domestic challenges, there is a real chance that eternity will favor freedom, and not socialism and communism with Chinese characteristics.

Mark Payumo is an international security analyst. He is a former Philippine Army Special Forces Officer and graduated from the Philippine Military Academy in 2006.