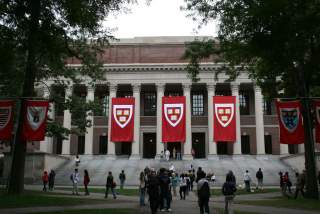 Colleges are quickly dropping their SAT and ACT essay requirements for applicants, with education experts saying the compositions “have never been of much use” and the institutions suggesting that their additional cost prevented poorer students from applying.

Brown University ditched the requirement on Wednesday, making it the last Ivy League school to do so and leaving just 21 colleges that demand the essays, according to The Princeton Review. Two additional universities are also considering dropping their SAT and ACT essay requirements.

“The short sample essays test-takers generate as part of the ACT or SAT have never been of much use in the higher education admissions process,” National Center for Fair & Open Testing Public Education Director Bob Schaeffer told TheDCNF. The group, also known as FairTest, supports test-optional college admissions.

“Institutions [that have dropped them] recognize that effective written communication requires collecting and analyzing information, determining relevance and central themes, drafting an initial response, reviewing, rewriting, and proof-reading,” he continued. “That process simply cannot be accomplished in the very limited time available on the test.”

“The current ACT/SAT ‘writing’ test format encourages coaching-driven, formulaic responses,” Schaeffer said. “Requiring scores from these exams is certainly not worth the extra cost either in money or time.”

The SAT essay asks test-takers to read a passage and then explain how the author constructs their argument using evidence from the text. Students have 50 minutes to complete the section — twice the time limit of the previous essay section, which asked students to respond to a prompt and was replaced in 2016.

“The SAT writing portion really got off to a really bad start when it was first implemented back in 2005,” education scholar Lance Izumi of the Pacific Research Institute, a free market think tank, told TheDCNF. It “relied on students using their own experiences and values [and] didn’t rely upon facts and evidence. Students could write something nonsensical and unrelated to empirical reality.”

But SAT developer and administrator College Board, as well as the ACT maintain the utility of their essay exams.

“We believe that the SAT essay provides a strong complement to the multiple-choice section by asking students to demonstrate reading, analysis, writing, and critical thinking skills in the context of analyzing a provided source text,” College Board spokesman Zach Goldberg told TheDCNF.

While colleges are spiking the essay component, Goldberg noted that the SAT has a multiple-choice writing section which tests skills such as grammar, punctuation, and sentence structure.

The ACT writing test “is a standardized, comparable, and reliable test that also provides information that students can use to improve their skills,” ACT spokesman Ed Colby told TheDCNF. “The ACT writing test is designed to measure on-demand writing skills, which are required for success in many college courses.”

Regardless, several colleges dropped the essay requirement to eliminate what they view as a price barrier to entry. Students pay an additional $16.50 or $17 to take the ACT and SAT essay portions, respectively.

“Given the significant growth in free school-day testing, it’s important to enable students from low-income families to take advantage of the tests already offered by their school districts and not place an undue burden on them to go in separately outside of normal school hours,” Brown Dean of Admission Logan Powell said after his school abandoned the standard. “Our goal is that for any talented student interested in Brown, the application process is not a deterrent — and we don’t want this test to be a barrier to their application.”

Similarly, Harvard University dropped its SAT and ACT essay requirement to accommodate students “from all economic backgrounds,” spokeswoman Rachael Dane said in a statement. While Columbia University also said it sought to eliminate an economic barrier, Yale pointed to the fact that not all school-day SAT and ACT exams offered the essay portion and the school did not want students to have to take an extra test.

Nine of the 21 institutions that still require applicants to submit ACT or SAT essays make up the University of California system, including schools like UC Berkeley and UCLA. UC spokesmen did not respond to multiple requests for comment.

And Princeton University replaced the standardized essay requirement with an academic essay, noting that it would prefer students to submit an English or history writing sample.

Izumi — who served as president of the California Community Colleges Board of Governors and authored The Corrupt Classroom, which makes an argument for public school choice — noted students’ poor writing ability.

Izumi said that 40 to 50 percent of incoming freshmen at California State University have needed remedial courses.