Why Democracy Is Failing the Arab World 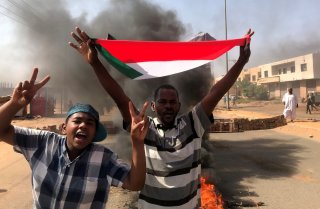 Despite the efforts of the so-called “Great Powers,” international organizations, and NGOs, the political landscape of the Arab world remains one dominated by undemocratic regime types and unsavory leaders. Of course, there are important differences, but a basic point holds true: the forms of government prevalent in the Arab world are Islamist rulers, military dictators, and monarchies. Pro-democracy forces have been sidelined and subjugated.

This has been furthered in recent weeks by the coup in Sudan. Between Omar al-Bashir’s 2019 ouster and late October, the Sudanese military had been sharing power with a civilian coalition as part of a council overseeing the transitional government. On October 25, however, the army dissolved the government and declared a state of emergency. Prime Minister Abdalla Hamdok was placed under house arrest and several ministers and opposition leaders were detained. General Abdel Fattah Burhan, the chair of Sudan’s “Sovereign Council,” who was supposed to step down next year has appointed a new ruling council, unsurprisingly under his leadership. The Forces of Freedom and Change coalition which had hitherto been sharing power with the military, also unsurprisingly, was left out of the body.

Western powers have expressed their concern regarding the situation, urging the security services to respect the right to free speech “without fear of violence or detention.” Yet those who have come out to protest the military’s machinations have been brutally suppressed: on November 13, at least five were killed as crowds in Khartoum, the capital, confronted gunfire and tear gas deployed by the authorities; three were also killed in a large protest on October 31.

The Failures of “Cookie-Cutter” Policies

The reasons for the prevalence of such odious regimes are manifold—ranging from explanations emphasizing petro-wealth in oil-rich states to lazy tropes about religion and a supposedly innate political culture that favors strongmen and supposed stability over democracy. What is certainly true is that Western foreign policy has fallen short of helping the situation; In fact, it has clearly contributed to the deteriorations witnessed across the region.

Western foreign policy, with its focus on one-size-fits-all solutions, has patently neglected to recognize important differences between states. A liberal democratic model has not been, and cannot be, simply transplanted from the shores of Europe or North America to the Arab world. Such attempts have contributed to cases in which national identity and nationhood have been destroyed in the vain hope of imposing foreign wishes on societies not amenable to such.

Forceful and uncompromising advocacy for cookie-cutter democratic solutions has proven itself to be not just unrealistic but also, frankly, dangerous. As Hussein Abdul Hussein, a Lebanese journalist noted in an article in the aftermath of the recent coup in Sudan, “Change has come to predominantly Arab countries in different shapes and forms… The result in all these countries, however, has been the same: either civil war or the reestablishment of autocracy.”

If anything is clear when it comes to democracy, even countries now considered established democracies, it is that it is not an overnight phenomenon. The laying of building blocks is a laborious process fraught with risks, setbacks, and often not insignificant barriers that must be overcome.

Democratic forces in the Arab world, where they exist, are by no means oppositions-in-waiting. The current smorgasbord of regimes in the region cannot feasibly be replaced by leaders of opposition forces overnight. Countries are not primed for peaceful transfers of power; the requisite political institutions to facilitate such processes are not sufficiently established, or not established at all.

Where movements and forces have emerged in favor of democracy, they have frequently made sharp yet short-lived bursts forward. To evidence this, one needs to look no further than the Arab Spring. What began as a protest against police in Tunisia in December 2010 dominoed across the region. The Tunisian government was overthrown; two governments apiece were toppled in Egypt and Yemen. The conflicts that erupted in Syria and Libya continue to have significant ramifications to the current day.

Yet, for all the optimism and global support, the longer-term effects have disappointed. While the protests were compared to those in Central and Eastern Europe in 1989, the long-term changes in those countries have far outstripped those in the Arab world. As sure as night follows day, the Islamist Winter followed the Arab Spring.

In Tunisia, after Ben Ali’s military regime was overthrown, a period of relative stability gave way to ructions that culminated in the political crisis of July this year, in which President Kais Saied dismissed the government and froze parliament. After Syria’s Assad regime granted small concessions to protesters, including the release of some political prisoners, it countered with a ghastly attack on its own people that continues to this day. Further examples abound.

What they all make clear is the fact that wide-ranging overhauls of often well-entrenched regimes cannot happen overnight. The forces and groups that thrive in the dark, damp conditions of autocracy have not, and will not, simply cede their right to profit and rent-seek. To take the example of Sudan, even after the ouster of al-Bashir, who now faces war crimes charges, the regime never truly left; Rather, as Yousra Elbagir argued, “The cogs of its machine were oiled and polished. The face was replaced. Then it continued to tick away - recalibrated and renewed.” In fact, such attempts worsen the lot of Arab citizens in that they prompt despots and other unsavory leaders to crack down harder in order to prevent such movements from arising again.

From Problems to Solutions

Restating the point, irrespective of the undoubted importance of doing, is, however, insufficient. Instead, we must turn to solutions to the problems that have, to date, seemed intractable. Rather than just identifying and analyzing problems, attention should be turned to identifying, investigating, and, most importantly, implementing fixes.

Policy is impossible to separate from the environment in which it operates. One must acknowledge, and adapt to, realities on the ground. The utopian thinking of so much Western policymaking has contributed to the unfavorable situation we witness today.

Elections, at Any Cost

The importance of such considerations is perhaps clearest in Libya, a country that has gradually crumbled since the overthrow of Muammar Gaddafi in October 2011. The West, owing to its intervention, has a duty to contribute constructively to Libya’s progress. As Obama has stated, the worst mistake of his presidency was failing to prepare for the aftermath of Gaddafi’s overthrow. As the United Nations Development Programme foresaw, the entrenchment of divisive political and militia groups in the decade since the overthrow of Gaddafi has undermined the re-establishment of an inclusive national identity.

Elections due next month, and insisted upon by the international community, however, are only likely to further exacerbate division and instability in the country. A recent change in tone appears to reflect a growing recognition of the counterintuitive position on holding elections currently. Of course, at some point, in the interests of legitimacy, progress, and citizen empowerment, free and fair elections must be held, and their results respected. At present, though, elections would clearly undermine the peace process rather than further it. Inevitable disputes over results and attempted manipulations in order to justify power grabs would push Libya back toward full-scale civil war.

Whispering Bell, a risk management consultancy, recently warned that opposition to elections in the western parts of Libya may result in “direct attacks on election-related assets,” including those of the High National Elections Commission and even potential candidates. Fighting in Tripoli earlier this month was the worst in a year.

The Libya case illustrates the futility of ignoring local conditions and wishes at the expense of pursuing democratic progress at any cost. Policymakers and those with a stake in Libya’s progress and reconciliation should instead look to Libya’s past in order to inform its future.

From 1951 until his overthrow by Gaddafi in 1969, King Idris ruled Libya under a constitution that provided for a hereditary monarchy alongside a representative, technocratic government. Though, today, one wouldn’t know it since it has been blindly ignored as an option by the international community, many Libyans support the return of said constitution. Genuine grassroots movements campaigning for the “Return of Constitutional Legitimacy” have sprung up across the country.

The destructive divisions in Libya are plain for all to see. Yet, pigheadedly, the international community continues to force an ill-advised solution upon the country that would only serve to further the divisions. A restoration of the 1951 constitution—which was, after all, only removed following Gaddafi’s coup—would help heal the nation. As Igor Cherstich, an expert on Libya at UCL, wrote in 2011, “Any force attempting to take the reins of the country must demonstrate national legitimacy.” The individuals lining up to run in next month’s election would most certainly not fulfill that criterion.

The West should thus support Libyans—by far the most important stakeholders in any process—in rallying behind a unifying figure under the auspices of the 1951 constitution. As a 2017 piece in The North Africa Post urged, the UN should “give a chance to a constitutional monarchy.” To date, though, Western obstinance and arrogance have ensured that it pushes forward with its blinkers fully intact.