Why Didn’t Russia’s Hypersonic Weapons Make a Cameo at the Victory Day Parade? 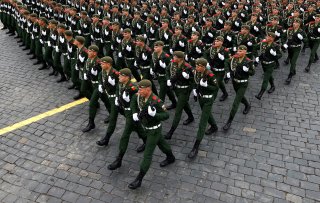 Did Russia stop the Nazi invasion in World War II because of cold weather? An inability to reinforce supplies from the Western front? Or could it have actually been the tenacity, temperament and fighting spirit of Russian forces absorbing massive casualties to stop the German advance? Perhaps it was a combination of all of these factors, and many others, mingled into a complex set of interwoven variables sufficient to inspire historians for generations?

Whatever the ultimate reason, or reasons, the Nazis were stopped after making extended successful advances. It would surprise no one to learn that the anniversary of this victory is a cherished and celebrated moment in Russia, given that it enabled the continued existence, and ultimate ascent, of the country decades ago.

Every year, Russia conducts a Victory Parade on Moscow’s Red Square to mark the occasion, an event likely known for showcasing Russian military prowess. Of course, the parade included historic T-34 tanks at the front to honor their past performance, yet what may be most striking about the parade was the range of newer, cutting-edge platforms the Russians put on display.

Overall, the parade involved more than twelve thousand troops, 190 items of military and special hardware and seventy-six aircraft and helicopters, according to Russia’s TASS news agency.

While the armored vehicles of course incorporated classics such as the BMP-2 and BMP-3 infantry fighting vehicle and modern Kurganets-25 combat vehicle, Su-35 jets and, of course, S-400 air defenses, the most significant elements of the parade may have been Russia’s newer platforms such as its Su-57, T-14 Armata tank. Interestingly, Russian T-72s, T-80s and T-90s were all featured alongside the Armata as what could be seen as testaments to the country’s sizeable and upgraded tank fleet.

While Russia still has a fair amount of Cold War hardware, particularly armored vehicles, which has likely been upgraded to a great extent, several of its modern platforms may remain somewhat enigmatic and concerning to Pentagon leaders. Just how formidable is the Armata? Does that matter much if there are not very many of them? Does the Su-57 fighter aircraft rival U.S. fifth-generation jets in any capacity? Perhaps that’s not entirely clear. One interesting element of the parade may lie in what was not included, or at least not mentioned in the TASS report. Where were the hypersonic weapons so enthusiastically touted by Vladimir Putin?