Why Do the Costs of the F-35 Stealth Fighter Keep Increasing? 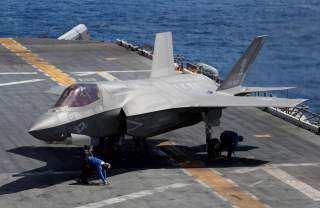 A Government Accountability Office report found that the Lockheed Martin Corporation, the designer of the F-35 Joint Strike Fighter program and the most expensive weapon system ever devised—has serious issues with its parts, repair, and maintenance software that tracks maintenance schedules.

A GAO report found that some F-35 maintenance crews were spending up to “5,000 to 10,000 hours per year manually tracking information that should be automatically and accurately captured” via software provided by Lockheed Martin—an astronomically inefficient waste of time.

This software is called ALIS, which stands for Autonomic Information Logistics System. ALIS is essentially an “information-gathering system that tracks F-35 data in-flight, relaying to maintainers on the ground the performance of various systems in near-real time,” according to airforcemag.com. It’s purpose is to “predict part failures and otherwise keep maintainers abreast of the health of each individual F-35.”

Due to software problems, there were “errors related to missing or inaccurate information about parts,” which resulted in false red flags, where some aircraft were marked unfit to fly, when in reality, additional flight hours would have been safe.

There were also some very basic problems related to long boot and update times, as well as tablets that were “perpetually behind the commercial state of the art.”

The Secretary of the Air Force Heather Wilson was quite frank about the ALIS system during the Air Force Association’s Air Warfare Symposium last year: “I can guarantee that no Air Force maintainer will ever name their daughter Alice,” she joked.

Additionally, the GAO report found concerns about the program’s “ability to deploy in operational environments because of the large server size,” and mentioned that there are still unresolved “connectivity requirements.”

The Pentagon will be developing a new diagnostic system that will be “military-managed,” and theoretically incorporate functional features from Lockheed Martin’s system into a more efficient and reliable system, dubbed “ODIN.”

Aside from increasing fleet readiness and increasing time in the air, the new ODIN software will drive down flight hour costs. The current cost per flight hour is around $35,000—ODIN will hopefully reduce that number by $10,000—to approximately $25,000 per flight hour.

The costs of the F-35 Joint Strike Fighter program are enormous. Estimates place the lifetime costs of the program at $1.5 trillion—around $406 billion just for the aircraft themselves, and the rest in operating costs.

The entire F-35 Joint Strike Fighter Program, with its three variants and customers in the Air Force, Navy, Marine Corps, stand to gain quite a bit from this upgrade—if it works. Hopefully it’s not another case of “good enough for government work.”