Why Elizabeth Warren Wants To Slash the Pentagon's Budget 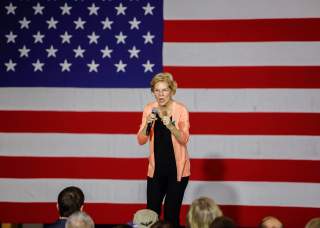 While candidate Elizabeth Warren’s plan to pay for her “Medicare for All” proposal has drawn critiques from almost every quarter, including from her rivals for the Democratic presidential nomination, those critiques have focused mostly on her ideas for increasing tax revenues. In particular, her plan to harvest about $800 billion from defense budgets has drawn little comment. In the context of a health-care expansion reckoned in the tens of trillions, the Pentagon cuts are a drop in the ocean. Yet in the context of military budgets, they matter a lot. And in the further context of Democratic Party priorities and reasoning, they perhaps matter a lot more. Warren’s Medicare-for-All scheme may be dead on arrival, but her desire to “take a sharp knife” to defense budgets is all but certain to survive as Democratic orthodoxy.

To begin with, Warren’s defense numbers are as sketchy as any of the figures in her plan. The $800 billion number is derived from a potted analysis of the “Overseas Contingency Operations” spending — what the Pentagon calls the supplemental appropriations required to cover the costs of the post-9/11 wars and other related expenses. This “OCO” money has fluctuated more or less in connection with the size of the forces deployed; it was highest (approaching $200 billion per year) during the years of the Iraq “surge,” when 150,000 troops were employed at the height of that counterinsurgency campaign. In recent years, as withdrawals from Iraq, Afghanistan, and now Syria have taken effect, the amount of actual money allocated to wartime operations has fallen to roughly $75 billion. However, the nominal amounts of OCO have stayed above $150 billion. That’s because this allows both the administration and the Congress to circumvent the spending caps enshrined in the Budget Control Act of 2011, providing funding for needs that should properly be included in the so-called “base” budget.

Prior to Warren’s manifesto, this OCO stratagem was anathema to the green-eyeshade mentality of the House Freedom Caucus Republicans. Indeed, it was current White House Acting Chief of Staff — and director of the Office of Management and Budget — Mick Mulvaney who first complained about the Pentagon’s OCO “slush fund.”  Warren’s plan revives the charge: “it’s not just bad budgetary practice – it’s wasteful spending,” she says, citing the fact that these accounts have covered everything from “more F-35 [fighters] to massive bombs ever used in combat” as examples of waste. Why it’s wasteful to purchase more of the centerpiece program for Air Force, Navy, and Marine Corps aviation is not explained. And, in fact, the most wasteful aspect of the F-35 program has been the failure to acquire sufficient aircraft in a timely way, driving up the cost of each plane.

But never mind. Warren suggests that OCO money won’t be needed once the commitment to “endless wars” in the Middle East is terminated, although this complaint would seem to be at odds with the critique that there’s much more in these supplementals than wartime expenditures — once the fighting stops, there would still be a lot of other “slush.”  Warren ultimately reveals that she intends to cut defense spending further, and to “balance our overall defense priorities.” That is longtime Democratic Party code for further reducing America’s role as the ultimate guarantor of international order, the “hard power” that is the basis for all other forms of power and influence.

While even a cut of $80 billion per year — about 12 percent of overall planned defense spending — would damage the military, further cuts would be crippling, in several ways. To begin with, it would render the residual U.S. posture in the Persian Gulf region untenable; despite the retreats of the Obama and Trump years, about 40,000 soldiers, sailors, airmen and Marines remain deployed there. It would also immediately handicap military readiness, particularly training, an area that the Defense Department has struggled to improve in recent years in the wake of increased airplane crashes and ship collisions. And finally, it would throw a monkey wrench into the complex contraption that is defense procurement, not just slowing the pace of, say, F-35 acquisition (now that the cost of that fighter has been driven down to its originally projected level), but again forestalling the effort at the sorts of “transformational” improvements needed to regain a technological advantage over adversaries, particularly the Chinese.

The final fib in the Warren view of defense spending is that such cuts will free up significant resources for domestic priorities and remove a “drag” on the overall economy. She builds a straw man and then sets him on fire by protesting that defense spending has begun to outpace domestic discretionary spending, conveniently failing to mention that mandatory spending — principally Social Security, Medicare, Medicaid, and interest on the national debt — accounts for two-thirds of annual spending, a proportion increasing annually. Also, let’s not discuss how Medicare for All might retard economic growth.

And it is in this regard — continuing the shift not just in the size but the role of the federal government — that the rest of her party is in lockstep with the Massachusetts senator. That’s what “balanced priorities” means. Some still favor a step-by-step approach, but they’re all headed in pretty much the same direction.

This article by Giselle Donnelly first appeared at The American Enterprise Institute.