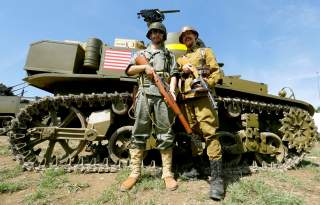 Key point: The M3 needed 7 people to operate and wasn't very strong or protected. Moreover, its tall profile made it easier for the enemy to spot and kill it.

The M3 medium tank, largely overshadowed by its successor the M4 Sherman, has a few stylish distinctions to it: It had two names, after American civil war generals who were archfoes.  It co-starred in a famous Hollywood movie with Humphrey Bogart.  Oh, and it was one of only a handful of tanks to see action with two main guns.

But the M3’s design was in fact based upon expediency.  Entering World War II, the United States fielded only M2A4 and M3 Stuart light tanks and a few dozen M2 medium tank suitable only for training.  All were armed with small 37-millimeter guns adequate for penetrating most early World War II tanks.

But German experience in France revealed that heavier tanks like the Matilda and Char B1bis tanks were effectively immune to small-caliber anti-tank guns.  Furthermore, 75-millimeter or higher weapons were far more effective at blasting entrenched infantry.

Two months after German Panzer overran France in 1940, the U.S. began designing a new medium tank with a medium-velocity 75-millimeter gun that could tackle both tanks and infantry.  But designing a turret that could fit that gun was technically challenging for U.S. industry, and the resulting vehicle—the M4 Sherman—wouldn’t be ready for action until late 1942, not fast enough for the U.S. military.

Thus, the M3 Lee arose as a stop-gap solution. It mounted a 75-millimeter M2 gun in a swiveling sponson on one side of an expanded M2 medium tank hull, while a 37-millimeter gun was fitted on a fast-turning, electro-hydraulically powered turret—a similar configuration to the French Char B1bis.

The Lee’s seven-man crew—a commander, driver, radio operator, two gunners and two loaders—additionally disposed of two to four .30 caliber machineguns for anti-infantry and anti-aircraft defense.  Between 38 to 51 millimeters of riveted steel armor protected the crew, and an R975 Whirlwind aircraft engine could propel the 30-ton tank to a respectable maximum speed of 26 miles per hour.

Starting August 1941, American factories churned out six different variants designated the M3 through M3A5, mixing and matching different engines (some had GM diesels or Chrysler multibank engines), turret designs (riveted, cast or welded) and hull guns (the M3 model had vertical stabilization and greater penetration).  By the time production was discontinued in December 1942, 6,258 M3s had been built.

Of those vehicles, over 2,855 were promptly sold to the British—then beleaguered by General Erwin Rommel’s Afrika Korps in a see-sawing mechanized war for control of North Africa.  The British insisted on custom models dubbed the M3 Grant (after General Lee’s Civil War nemesis) with a turret-mounted radio eliminating the need for a radio operator.

167 M3 Grants first saw action in the Battle of Gazala in May 1942.  The Brits initially loved the M3s as their domestic tanks still relied on 2-pounder 40-millimeter guns that lacked anti-personnel shells. The Lee’s 75-millimter gun could pick off German Panzer II tanks at long range they couldn’t respond effectively too.

Rommel wrote: “Up to May of 1942, our tanks had in general been superior in quality to the corresponding British types. This was now no longer true…”

Nonetheless, the M3’s slapped-together flaws became apparent.  Tankers generally prefer to fight from ‘hull down’ position, with just the turret top exposed above the crest of a hill.  But the already 3-meter-tall Lee needed to fully expose its hull if was to employ its much deadlier 75-millimeter gun.

The M3’s armor provided adequate long-range protection versus the Panzer III’s 50-millimeter gun, but proved vulnerable when German Panzer IVF2 tanks with long-barreled 75-millimeter guns entered the fray later in 1942.  Even non-penetrating hits to the M3 caused rivets to pop out and bounce around inside the tank like deadly ping-pong balls.

The 13th’s M3s suffered heavy losses to Panzer IV tanks and anti-tank guns of the 10th Panzer at Djedeida.  However, during Rommel’s infamous counterattack at Kasserine Pass, Lees managed to ambush a column of 40 tanks from the 21st Panzer division attacking Sbeitla, knocking out 14—though the unit subsequently suffered heavy losses in a rear-guard action Rommel described as ‘clever and well fought.”

The M3 in Asia and Eastern Europe:

The U.K. transferred its Grants to fight Japanese forces in Burma.  Furthermore, Australia and the Indian Army received 1,700 and 900 Grants respectively.

The M3s proved capable of negotiating the theater’s rough terrain to provide badly needed fire support.  In the tide-turning Battle of Imphal, Grants blunted the advance of the weaker Type 95 tanks of the Japanese 14th Tank Regiment and a lone M3 was even dragged into place over a hotly contested tennis court in Kohima and played a key role blasting out dug-in Japanese troops.

U.S. Army M3s only saw action in the Pacific in the battle for Makin Island in particular, where two tanks from the 93rd Armor Battalion that made it on the beach blasted numerous pillboxes.

The U.S. also delivered 1,386 M3s to the Soviet Union—though interdiction of Arctic convoys resulted only in 957 being received, initially without the necessary ammunition.

Red Army soldiers did not harbor much affection for the M3, nicknaming it the “Coffin for Seven Brothers,” particularly as the paint and soft rubber lining inside the tank was known to combust and emit poisonous fumes when struck.

In one infamous incident during the Battle of Stalingrad, all but two of the 51 Lee and Stuart tanks of the 241st  brigade were lost after going over a ridge on September 26—victims of mines and anti-tank guns of the German 3rd Motorized Division.  The Lee-equipped 167th Brigade was sent to find them and too fell victim—with only four vehicles escaping. The 192nd brigade were less fortunate, suffering heavy losses after being mistaken for enemy tanks

However, the Lee’s performance in combat exceeded its reputation according to a detailed article by Yuri Pasholok.  For example, the Lee-equipped 230th regiment claimed to destroy 17 German tanks in battle at Chepel.

Several M3 units participated in the titanic tank battle at Kursk in 1943.  The 245th Tank Regiment covering the 67th Infantry Division was attacked by 200 German Panther tanks on July 5, but claimed knocking out a dozen despite incurring heavy losses.

Despite their obsolescence, the Soviet Lees continued to see combat until the end of the war—usually on secondary fronts such as the Finnish sector.  The Red Army had just 102 tanks of 957 still in operational condition by the time of the Japanese surrender.

M3s hulls were also widely adapted during the conflict to other useful roles as artillery tractors, armored recovery vehicles and even Scorpion tanks equipped with mine-clearing chain-flails.  355 M3s were converted into “Canal Defense Light” tanks designed to blind enemy troops at night with searchlights.  These were used in combat during the Crossing of the Rhine, and to capture German frogmen during the Battle of Remagen.

Thus, while the M3 is generally described as an unwieldy and ultimately unsuccessful design, it provided effective service in 1942 through early 1943 and performed useful second-line duties afterward.

And the M3 Lulubelle starred in the Humphrey Bogart war film Sahara. Not bad for a stopgap!

Sébastien Roblin holds a Master’s Degree in Conflict Resolution from Georgetown University and served as a university instructor for the Peace Corps in China. He has also worked in education, editing, and refugee resettlement in France and the United States. This first appeared in 2019.