Why Everyone Wants to Buy Military Hardware from Israel 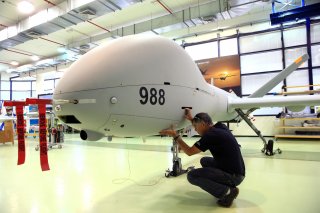 Israel’s Defense Minister Benny Gantz flew to the United States in the wake of the war in Gaza. It was June 2 and Gantz left just as a new coalition government was in the process of being formed to oust Prime Minister Benjamin Netanyahu. The chaos in Jerusalem with potential ministries changing hands was less important than shoring up Israel’s reserves of Iron Dome interceptors needed to confront rockets fired by Hamas, Hezbollah or other Iranian-backed groups. Gantz was going to the United States to seek up to $1 billion in emergency military financing.

Meanwhile, Israeli defense companies were looking east for new opportunities. The two issues are connected because while Israel has some of the most advanced defense technology in the world, including the Iron Dome system, the country’s links to the United States and U.S. companies is as essential as its continued role in knitting itself into the defensive security relationships that stretch from India to Australia.

On May 24 Israel’s Ministry of Defense said that “the scope of Israel’s defense export contracts in 2020 reached $8.3 billion.” This is the second-highest sales Israel has seen. The Ministry says it indicates a 15 percent increase in the number of agreements signed, in comparison to the previous year. “Israeli industries, both small and large, have proved that they are among the world’s leading companies, both in quality and in technological advance—even during a year of global crisis. During the past year, we have worked intensively to deepen government agreements and cooperation with our partners around the world, and we will continue to do so. Israel has new markets and significant opportunities for development that will contribute and inject billions into the local economy, bring new jobs, and contribute to Israel’s security,” said Gantz.

Throughout the year 2020, the Directorate of International Defense Cooperation (SIBAT), in the Israel Ministry of Defense, has assisted and supported Israeli defense industries in signing dozens of significant agreements with partners, says the Ministry of Defense. Around 44 percent of the exports are to Asia and the Pacific. Globally, Israel is a leader in radars and electronic warfare, as well as avionics, optics and unmanned aircraft. This also includes things like using artificial intelligence on numerous platforms and driving surveillance with automatic target recognition.

“An increase in defense exports at the height of the global pandemic is a significant achievement,” said the head of SIBAT, Brig. Gen. (Res.), Yair Kulas. “It is attributed first and foremost to the excellence of Israel’s defense industries and to their expertise—a result of their intimate understanding of military needs through the IDF.”

In the wake of the Ministry’s announcement, Israel Aerospace Industries, said that it had confirmed its interest in cooperating with NIOA’s Australian Missile Corporation “to fulfill the Australian government’s vision of developing sovereign Australian defence capabilities.” IAI is one of Israel’s three large defense companies and is an expert in unmanned aircraft and avionics. It also owns Elta which makes the Iron Dome radar. Robert Nioa, CEO of NIOA and the Australian Missile Corporation said that IAI is critical to the success of the Commonwealth’s sovereign guided weapons enterprise. “We welcome any opportunity to bring leading technologies to Australia to enhance the capability of the Australian Defence Force.” IAI has been seeking increased opportunities down under. “IAI brings state of the art capabilities, technological excellence and knowhow, and vast combat-proven experience, accumulated over many years. We are happy to join hands with NOIA in establishing sovereign Australian defence capabilities,” said Boaz Levy, IAI’s President CEO.

In late May IAI also did a briefing to discuss its inroads in Australia. Oded Sheshinski, Managing Director of IAI Australia spoke along with Tzvika Yaron, of the Land Division of IAI. They said IAI wants to deepen its role with Australian companies. IAI has a lot to offer and is pitching the experience that it has gained supplying systems that are relevant to the IDF and other militaries. This relates to using sensors and technology to find enemies embedded in urban environments. Much of this kind of technology applies to the counter-terrorism battlefield or the asymmetric wars that are against non-state actors, like ISIS or Hezbollah. This also includes what Israel and others increasingly refer to as a “multi-dimensional approach” to war, which includes a lot more autonomous systems.

What all this means is militaries are leaning much more heavily on electro-optics, signals intelligence, radar, and artificial intelligence that helps classify and identify targets, taking the workload off people. The big picture, IAI says, is providing the right information to decision-makers and avoiding friendly fire. It means keeping the element of surprise and protecting units such as combat engineers. It also means increasing the survivability, lethality and maneuverability of forces. IAI is a partner on a number of new technologies, such as Israel’s Carmel program for future armored fighting vehicles. Carmel may be an autonomous or optionally-manned vehicle.

These kinds of vehicles also need new sensors to confront complex threats, such as drones. This means adding counter-unmanned-aircraft solutions, or Counter rocket, artillery, and mortar technology to vehicles and also pairing them with unmanned aircraft, what is called “man-unmanned teaming,” also known as MUM-T. Australia is expressing a lot of interest in teaming solutions, for instance acquiring the Boeing loyal wingman Airpower Teaming System.

IAI highlighted a number of its successful systems, such as its Drone Guard that protects against drone threats. Drones matter because even Hamas in Gaza is now using drones modeled on the Iranian Ababil to strike at Israel. Iron Dome shot at least one down during the recent war. IAI is also working on laser solutions and ground robotics, including an autonomous D9 bulldozer and other robots such as the Elta ELA-6601 Rex. Soon unmanned vehicles will be launching drones of their own, which means units can operate in the field with numerous unmanned solutions. These systems will have optics and a 7.62-millimeter gun on them, for instance.

At Rafael Advanced Defense Systems, the third of Israel’s big three defense companies, there were also advances in its decision to sign on to an initiative for Israeli cyber solutions with partners to establish the Israeli Operational Technologies Cyber Consortium. The initiative is in cooperation with the Israel National Cyber Directorate, the company said. Rafael is the prime contractor of Israel’s national Cyber Emergency Response Team (CERT). This is important because new cyber threats are emerging. In the last month American pipelines, a ferry, meat and subways have been affected. Israel has also been threatened by cyberattacks from Iran.

Rafael announced its new consortium at the GISEC tech confab in the UAE. Israeli defense companies are increasingly playing a more open role in the UAE after Israel signed peace deals with the UAE and Bahrain. The new Cyber consortium will include Rafael, IEC, Tashan, Waterfall Security, Trapx, MobileGroup, Radiflow, CyberPro, XMCyber, Cervello, and Cynerio, the company said.

From cyber to land warfare solutions in Australia, Israel continues to be a leader in future warfare technology. However, as the Gantz visit to the United States illustrates, this comes as part of a larger defense strategy that links Israel to the United States closely and involves key partners and allies in Asia, such as Australia and India.