Why the F-105 Thunderchief Fighter-Bomber Was Nicknamed the 'Thud' 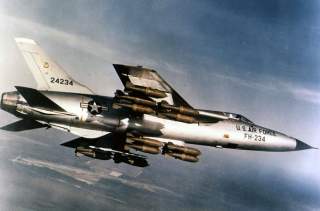 In 1951 Republic Aviation began a project to develop a supersonic tactical fighter-bomber to replace the F-84F. The result was the F-105 Thunderchief, later affectionately nicknamed the “Thud.” The prototype YF-105A first flew in October 1955, but the first F-105D did not fly until June 1959. A total of 833 Thunderchiefs of all types were built, including 610 F-105Ds.

Noteworthy the “D” variant could carry the entire 12,000-pound weapons load externally, giving the chance to use the internal bomb bay of the aircraft for fuel. This feature gave the F-105D the ability to take off with a full ordnance and minimum fuel load, refuel in the air, and take the maximum payload to the target.

But despite this unique feature, there was talk about canceling the F-105D program because of several groundings of the fleet following engines problems that resulted in two fatal accidents.

According to Ted Spitzmiller book Century Series, The USAF Quest Air Supremacy 1950-1960, as had occurred with previous F-105 models, production blocks resulted in configuration differences that caused issues with maintenance procedures and spares ordering. Actually problems with routing and securing the miles of wiring along with hydraulic and fuel lines resulted in chafing which eventually caused shorts and leaks that brought to high maintenance ans several accidents. Given these issues a standardization program called “Project Look-Alike” was undertaken between 1962 and 1964 to inspect these systems.

Furthermore it was decided to address the problem of water gaining entry into various nooks and crannies and creating serious electronic failures and other maintenance problems. Noteworthy this issue came to light during Europe deployments where seasonal weather was much more severe. However after access panels were released and the aircraft were painted with a silver lacquer to seas as much of the plane as possible the failures decreased.

Another constant problem was overheating in the afterburner (AB) area of the fuselage. This issue was addressed by adding two additional air intakes on either side of the aft fuselage to provide more cooling from outside air.

Howard Plunkett, author of the book F-105 Thunderchiefs: A 29-Year Illustrated Operational History, with Individual Accounts of the 103 Surviving Fighter Bombers, says: “A ‘constant problem’ is a bit understated. Fuel leaks and overheating caused explosions and aircraft losses. Safety Pack II was the mod that installed the cooling scoops on the left fuselage (among other things) during March – July 1965. It was probably the most significant mod to the F-105 and fixed the problem in time for combat deployments that year.”

Given all these problems the projected production of 1,500 aircraft would be dramatically scaled back.

Eventually as told by Spitzmiller, while the name Thunderchief was appealing to Republic and its PR department, those who flew this heaviest fighter of its time, with a wing loading that guaranteed a high descent rate when the engine faltered… applied another name. Whether it was the sound of 50,000 pounds of metal uncontrollably impacting the earth, or the light-hearted shortening of the name Howdy Doody’s Indian rival, Chief Thunderthud, the F-105 became known affectionately as the “Thud” by those who flew and maintained it.