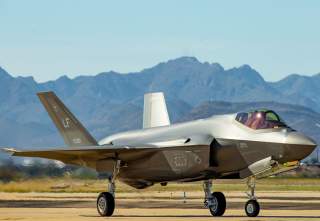 According to the U.S. Navy, the perfect aircraft to satisfy this requirement would a fourth-generation fighter like an F-16 or a Su-27 featuring an upgraded radar.

As reported by Seapower Magazine, Jeffrey Parker, a former U.S. Air Force (USAF) fighter pilot and CEO of Airborne Tactical Advantage Company (ATAC) told that the F-35 is easily able to counter the adversary services aircraft thrown at it in numbers. For this reason, the adversary services industry is struggling to come up with a realistic threat aircraft to challenge fifth-generation fighters.

“Nothing gets close to these things [the F-35s],” said Jeffrey Parker. “I’ve flown against the [Marine] F-35Bs down at [Marine Corps Air Station] Beaufort [S.C.] It’s an impressive airplane. Even in the hands of students, it’s a very capable fighter.”

Moreover, he added that the U.S. Navy, USAF and U.S. Marine Corps (USMC) need “increased adversary services aircraft” to reduce the airframe fatigue of their front-line fighters and their limited flight hours in the adversary role.

In particular, as explained by Parker, the U.S. Navy “has a shortage of readiness training, so they’re reaching out to industry to try to solve that problem. They’re using too much ‘gray air’ [warfighting aircraft].” Actually, an adversary service aircraft that flies 250 hours a year would be able to free an F/A-18 Super Hornet for fleet use for a year. According to Seapower Magazine, that means for instance that ten ATAC aircraft in use for 250 hours each can extend the lives of 10 Super Hornets per year.

Currently, the U.S. Navy has three squadrons tasked to simulate adversary aircraft: the units are equipped with F-5 or F/A-18 fighters, while the service Topgun school uses both F/A-18s and F-16s. The USMC has one “red air” squadron of F-5s and the USAF two aggressor squadrons of F-16.

Contractor-companies like ATAC supplement adversary service by means of foreign-built fighter aircraft such as the supersonic F-21 Kfir and slower Hawker Hunter.

“The aircraft shortages in training are made worse by the F-35 fifth-generation aircraft, which you need a lot of ‘bad guys’ for,” Parker said.

For this reason, more fourth-generation fighters would be needed to meet the increasing demand for adversary services, but Parker said that “not enough fourth-gen aircraft in the world are available to industry. Nobody can provide it all, nor can all of us [the adversary companies] provide it together, at least in the next five years or so.”

According to the U.S. Navy, the perfect aircraft to satisfy this requirement would a fourth-generation fighter like an F-16 or a Su-27 featuring an upgraded radar.

“There’s only one category of radar [that can meet specifications] — an AESA [electronically scanned array radar],” explained Parker. Moreover, he added that “By going to the fourth-generation level, the Navy is acknowledging that these programs are going to be around and integrated at the highest levels, because now they have radar; pulling 9 gs [nine times the force of gravity] at the merge; [and] helmet off-boresight capability.”

However, Parker said that for cost reasons single-engine jets are needed, rather than two-engine aircraft.

A claim confirmed by Parker himself who stated “The Raptor is such an uneven fight, that if you send out two Raptors against anything else, there’s no challenge, no work for the pilots to do. For a ‘two-ship’ they want 12 bandits.”