Why the F-35 is Crucial to U.S. Air Supremacy 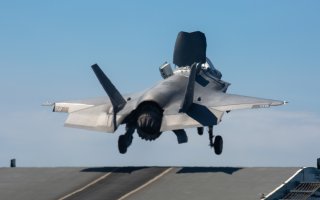 Amid all the debate and political sparring over funding, sustainment, per-aircraft cost, and long-term modernization, there is another pressing circumstance that tends to get obscured by the conceptual and budget-oriented turbulence surrounding the aircraft.

The reality often dismissed or simply buried beneath the ongoing debate is that there is a credible and interesting argument why continued procurement, sustainment, and modernization of the Lockheed Martin F-35 Lightning II stealth fighter jet could help establish U.S. air supremacy moving into the coming decades.

There are a number of variables that seem to impact this equation. First, the Russians and Chinese simply do not have large numbers of fifth-generation stealth fighters. Yes, the Chinese J-20 Mighty Dragon and Russian Sukhoi Su-57 could quite realistically present serious threats and challenges to the F-35. However, China now operates roughly fifty J-20 fighters and Russian news reports say the current plan is for the country to acquire roughly seventy-six Su-57s. It is possible, however, that each of these countries, particularly China, could “flex” production capacity and potentially rev up production of fifth-generation fighters as U.S. fifth and sixth-generation aircraft arrive. China's industrial capacity for production is quite possibly a serious threat, and even though right now the U.S. Air Force plan for 1,763 F-35s massively outguns Russia and China, there is no reason to assume that will remain the case.

Given the widely recognized reality that “mass matters” when it comes to fifth-gen aircraft, for networking, mission coordination, and operational envelope reasons, there may in fact be a significant security reason why F-35 production should be increased.  Even though a single F-35 has shown to be capable of tracking and destroying a larger number of enemy aircraft due to its targeting range, computing, and sensor resolution, an ability to operate large numbers of dispersed, yet interconnected groups of F-35s is could help preserve U.S. overmatch against Russian and Chinese fifth-generation fighters.

“Our fighter force was designed for a Soviet force. We are behind and our current incremental rate of change is insufficient. Fighter Roadmap is a change in investment priorities required for a peer fight. The fighter force will again need to flex from its original design to defeat a peer threat. We need to face the realities of a new threat environment and that requires the fighter force to change,” Gen. Mark Kelly, Commander of Air Combat Command, told an audience at the 2021 Air Force Symposium.

This tactical advantage is greatly reinforced by the F-35s international reach and ability to network. The aircraft's Multifunction Advanced Datalink (MADL) enables the jets to quickly and securely share time-sensitive data across a fleet or formation of F-35s. This extends to allied F-35s as well, something of growing significance given the number of countries acquiring the F-35 or adding greater numbers of aircraft. Japan is underway with a multi-billion dollar F-35 buy, the UK already operates the aircraft, Israel is crafting its own F-35s, Switzerland just chose the aircraft and F-35s are arriving in Denmark, Norway, Italy, South Korea, Australia, Poland, and others. The reach of this alliance, and the extent to which it fortifies interoperability could quite possibly completely reshape the strategic and tactical landscape when it comes to air superiority. Larger numbers of F-35s through U.S., NATO, and Pacific allies would massively reinforce this.

In effect, networked, multinational F-35 formations could blanket and potentially overwhelm an operational area, this kind of technological infrastructure closely aligns with the Pentagon’s fast-growing emphasis on Joint All Domain Command and Control (JADC2). JADC2 is an approach aimed at engineering and enabling a dispersed, yet highly networked force of “meshed” combat nodes able to process incoming sensor data at the “edge” or point of attack using advanced algorithms and an ability to transmit widely and securely across the force with low latency.

Could this kind of international force-structure dynamic outmatch Russian and Chinese fifth-generation aircraft? Possibly, given that greater numbers of F-35 would build in redundancy, offer a targeting and surveillance advantage, favor multiple angles of attack and surge superior power.

Prospects for this of course pertain to the key question of potential performance superiority. Simply put, does a single F-35 outmatch Russia's Su-57,  its new Checkmate export fighter, or a Chinese fifth-generation aircraft? There is likely not much public information about these rival aircraft apart from what each writes in their own state-run newspapers. However, the visible external configuration of China’s J-20 and J-31 both appear to be blatant F-35 and F-22 rip-offs to a large extent. Chinese-backed newspapers regularly write about engine upgrades, technical or design enhancements, and production progress related to the J-20 and J-31. However, less is known about the aircraft’s weapons. China also talks about its fast-progressing effort to build a carrier-launched variant of the J-31 fifth-generation aircraft. At the same time, China does not appear to have any vertical take-off equivalent to the U.S. Marine Corps F-35B, something which might put China at a disadvantage when it comes to operating fifth-generation attack systems from smaller ships such as amphibious assault ships.

Also, very little is known about many of the technical specifics of the Su-57 jet. But a report by Russian state-run news agency TASS says its stealth configuration consists of composite materials, advanced onboard electronics, an onboard computer referred to as the “electronic second pilot,” radar technology, and an internal weapons bay.

A true margin of superiority, however, would likely be determined by whichever aircraft operates with superior sensors, image fidelity, computing, weapons guidance, and range. Major leaps forward when it comes to aircraft structure may be less impactful than the anticipated impact of Artificial Intelligence (AI), faster computer processing speed, in-flight target guidance such as collaborative weapons and two-way datalinks, improved anti-jamming countermeasures, and, perhaps most of all, range and precision. Given this phenomenon, F-35 modernization and software drops come to mind. If the principle margin of superiority is determined by these variables, then the ongoing effort to integrate new computing, weapons interfaces, and guidance systems through software upgrades could put the F-35 in a favorable position. The Increment IV software drop, for instance, is expected to enable long-range, all-weather, precision-guided weapons such as Raytheon’s Stormbreaker precision-guided glide bomb which uses a tri-mode seeker and datalink to shift course in flight as needed. The F-35's threat library, or Mission Data Files—able to catalog established threats in specific, high-risk areas of the globe—might be upgraded quickly and operate with lower-latency, high-speed transmission rates.  All of this is so pressing and critical that former Air Force Acquisition Executive William Roper once said “software may decide who wins the next war.”

With this in mind, Pentagon and Lockheed Martin F-35 developers have for many years sought to position the aircraft for “continuous modernization” such that it will fly into the 2070s. It goes without saying that advances in AI, sensor range, and data processing will flow into the F-35 extremely quickly given the pace of innovation and technological advance. There is already a lot of work going on when it comes to hardening weapons guidance systems against jamming, processing, and networking massive volumes of data at the “combat edge” to decrease sensor-to-shooter time and operate warfare at the “speed of relevance.”  Could the F-35's electro-optical targeting, 360-degree distributed sensor camera aperture, off-boresight air-to-air missile targeting technology, and improved, ultra-high-speed AI-enabled computing continually reshape the aircraft’s key performance parameters? The answer seems to be yes, as this has already been demonstrated through previous software drops such as the now operational Block III.

Could sensor superiority, new generations of AI-enabled computing, weapons guidance improvements, and hardening enabled by future software upgrades ensure F-35 superiority? It is certainly possible. But even if rival fifth-generation aircraft are in some ways comparable, they will not rival U.S. air supremacy should the United States operate superior numbers of the F-35 itself and among its partnership with allies.

Finally, F-35 superiority can be greatly extended not only with greater numbers of aircraft. Improving its ability to interoperate with a new generation of U.S. platforms could be defining when it comes to achieving supremacy. The F-35 is obviously being engineered to share real-time, high-speed data with emerging systems such as the B-21 bomber and an already airborne sixth-generation fighter. This can be accomplished by architecting systems with common IP protocol standards for interoperability. Or, as is the case with the F-22 to F-35 connection, it can also be made possible through gateway technologies able to convert one transport method to another or establish a “bridge” between otherwise disparate systems. These could include radio, GPS, Radio Frequency (RF) sensors, and things like infrared seekers. One innovation, in particular, Northrop Grumman’s Freedom 550 gateway radio, translates RF signals from otherwise incompatible aircraft communications systems into a common ability to network information between the F-35 and F-22, while preserving stealth functionality.

This kind of synergy is something one can only expect from sixth-generation aircraft as well. For instance, the Air Force talks often about how the emerging sixth-generation Next Generation Air Dominance (NGAD) F-22 replacement will not only potentially introduce new paradigms of air supremacy, but will also be specifically engineered to operate in tandem with large numbers of upgraded F-35s.

Most of all, the force that sustains superiority will need to not only operate in larger numbers but also maintain superior sensing, computing, range, and weapons guidance. One way to increase the possibility that the United States can stay in front seems quite clear. Buy more F-35s. Not only does adding more lower the cost in block or bulk buys, but it favors sustainment reach and consistency due to commonality and larger-scale production.  Prominent members of Congress, Air Force senior leadership, along with Navy advocates for the F-35 and many F-35 pilots themselves continue to champion the importance of F-35 superiority. It just may be that greater numbers of F-35s, given the way they are architected to upgrade, may be a lesser realized key to ensure U.S. air dominance and security.