Why the F-35 Rules: Study History, Study the Costs, Study the Threats 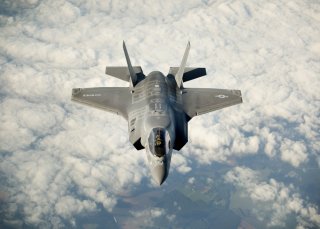 Last week, House Armed Services Committee Chairman Adam Smith lamented the supposedly exorbitant costs and “poor track record” of the F-35 Joint Strike Fighter. Smith’s lack of expertise in airpower might qualify him for a pass, of sorts, for those ill-informed comments. But, Gen. “CQ” Brown’s recent public statements on the subject are real head-scratchers.

Following in the footsteps of his predecessor, Brown, the current Air Force Chief of Staff,  is sending mixed signals---being openly tepid toward the F-35 one minute, then trying to reassure the world of his support for the fighter the next.

That in itself is puzzling, as the ink hasn’t faded on his predecessor’s study “The Air Force We Need” which should have more than answered that question.

What are we to make of this? First, let’s consider the advantage of sustaining a “balance” of outdated weapons systems and leading-edge fighters by looking back at the last time we actually fought a war with a peer competitor with mixed fleets of aircraft. (We’ll come back to the question of cost shortly.)

In the days leading up to World War II, the Roosevelt administration moved aggressively to build a fleet of the most viable fighter aircraft available: the Curtiss P-40 Warhawk. First flown in 1938, the P-40 began rolling off production lines in 1939, and by the time the Japanese attacked Pearl Harbor in 1941, the U.S. had more than 40 squadrons of P-40 fighters based around the world.

The P-40 was comparatively cheap.  By 1943, it cost 15 percent less than the newer model P-51 Mustang, and you could buy two P-40s for every P-38 or P-47 (also follow-on models) the service acquired.    Unfortunately, with the rapid advances in fighter technology in the late 1930s, the P-40 was already outdated by the time the U.S. declared war on Japan. By 1943, with even the best-trained pilots in the world, pitting the P-40 against German Messerschmitts would have been virtual suicide – not just for the P-40 pilots, but for the B-17 and B-24 bomber crews they were tasked to protect.

The Air Corps continued to buy the P-40 as an offering to allies through the lend-lease program, but wisely refitted its front-line units with P-51s, P-47s and P-38s as fast as they were available. Over time, the fighter inventory went from nearly 100 percent P-40s to a ratio of 80-20, then 50-50 and, on down.  As the P-40 was removed from service and the percentage of leading-edge fighters grew, the bombers started getting the top cover they needed and engagement ratios became more and more favorable for the U.S.

It is hard to imagine Gen. Hap Arnold, the commander of the Air Corps, suggesting that the service slow acquisition of the most dominant fighter of the war, the P-51, by fielding new, less expensive, P-40s for U.S. pilots to fight (and die) in, in the pursuit of a balanced mix.

Yet that is exactly what congressional and senior defense leaders are proposing today, on the mistaken belief they’ll be saving money.

In Fiscal Year 2022 a fully combat-capable F-35A will cost $77.9 million but, a 4th generation baseline F-15EX will cost $87.7 million.  The baseline F-15EX has no targeting pod and no electronic self-defense systems, In other words, it’s incapable of flying any combat missions. When you add in the additional systems and equipment required to make it combat capable, an F-15EX will cost $102 million—30 percent more than a stealth fighter able to fight in all combat environments. The F-35A’s cost per flying hour is almost a wash with that of the F-15EX, and fighter pilots who have flown the F-35s love them.

The Air Force Chief of Staff and others argue there are places in the world where you could save money by flying less capable fighters. So what? We have plenty of jets that can fill that role now. Adding new, more expensive, fourth-generation fighters to their numbers to “maintain a balance” would make even less sense than it would have in 1943.

Ongoing Russian or Chinese programs that sell or “loan” high-end surface-to-air missile systems (SAMs) to any nation willing to buy them makes fourth-generation fighter employment untenable.  The Russians have already done that in Syria, and those incredibly capable SAMs are proliferating globally.

Using an F-15EX, a fighter designed in the 1970s, in a hot, high-threat environment today would be suicide—not just for the F-15EX crews, but for the combatants relying on those jets to come through.

The Air Force doesn’t need another study to figure that out. And with peer states growing bolder and more capable by the day, it cannot afford to delay the growth and refitting of its fleet of fighters with the most viable weapons system available in the world today: the F-35A.