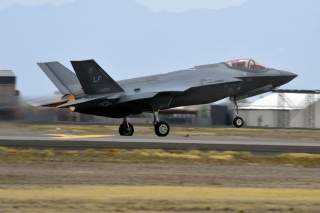 In real life, the F-35 Joint Strike Fighter is the Pentagon’s most expensive — and controversial — airplane. It’s beset by numerous design flaws, allegations of price-gouging by manufacturer Lockheed Martin and several costly delays. But in the movies, the F-35 is at the forefront of America’s defense against terrorists and extraterrestrial invaders. Except when it’s called to its movie duties, the jet tends to get blown up real good.

(This article by Robert Beckhausen originally appeared on War is Boring in 2013.)

It’s no secret that Hollywood is prime real estate for the military’s public relations efforts. Film studios often need the military’s assistance for prop equipment and the latest technology, which the Pentagon is eager to give provided it can exercise editorial review. Behind the movie magic, the F-35 is also a real warplane, which the Pentagon plans to spend $1.5 trillion developing into the military’s primary attack fighter (with stealth capabilities) for the next several decades. According to Lockheed, it’s the “pinnacle of more than 50 years of fighter development technology” and is “designed to dominate the skies.”

But the F-35's career on the big screen has not been a charitable one. From Man of Steel, The Avengers, Green Lantern to the fourth Die Hard movie, the F-35s have been ineffective at best, and criminally destructive at worst. They’ve indiscriminately attacked American cities or crashed during testing. They’ve been ripped apart by superheroes who’ve swatted them away like King Kong versus obsolete biplanes. And the one film that could have redeemed the jet’s image to the mass movie-going public was cancelled after the director committed suicide.

The F-35 was not only useless at stopping the invasion of Earth by the forces of General Zod in 2013's Superman reboot Man of Steel, but using the aircraft was actually counter-productive. During the film’s climactic battle in the city of Metropolis, a squadron of F-35s are scrambled against the invading alien forces. The squadron is blown away in a few seconds, with one plane crashing into a skyscraper over the heads of panicked and fleeing Metropolites.

Chuck Watson, a disaster consultant and analyst, calculated Man of Steel’s total damage to the fictional city at $750 billion in physical damage, with an overall economic impact of $2 trillion. In a satirical editorial to the fictional Daily Planet and provided to Buzzfeed, Watson wrote that “we would be remiss if we did not point out that our military was initially not only ineffective, but the source of considerable unnecessary damage.” Much of that due to friendly fire.

The F-35 made another appearance — its first in a film — in the less-successful 2006 reboot Superman Returns, but only in an escort role, and the planes were rendered in CGI. Man of Steel is the first film in which real, physical F-35s are shown. Notably, the A-10 Thunderbolt II ground-attack jets seen in Man of Steel perform much better.

The F-35 has met its match, and his name John McClane. At various points in his career over five Die Hard movies, action hero McClane (Bruce Willis) took out German hostage-takers, bands of mercenaries and a corrupt Russian official. It almost makes destroying one of America’s most advanced fighter planes seem anti-climactic.

At one point in the 2007 movie Live Free or Die Hard, a cyber-terrorist hacks into the military’s computer systems to trick the Pentagon into believing McClane is a terrorist. So the military sends an F-35 to indiscriminately fire at our everyman hero while he’s driving a stolen semi-truck on an elevated highway in an urban area — which would totally happen in that situation.

The F-35 proceeds to level an elevated highway loaded with cars, which then collapses onto more cars, crushing them. McClane’s semi-truck then spills over the side of the highway, and then pours out equipment and debris onto the fighter, with one chunk falling into the plane’s lift fan. The plane’s engine catches fire, the pilot ejects, and finally, the plane crashes and explodes. All of this happens while McClane jumps onto the plane, then falls off while sliding down a chunk of highway with the plane crashing and exploding behind him.

So what did we learn from Live Free or Die Hard? The F-35 misses its target, needlessly destroys a lot of infrastructure — and possibly the lives of numerous commuters — and then crashes.

But no matter. Jordan, who becomes the intergalactic defender Green Lantern, begins the film in a simulated battle against two experimental unmanned combat aircraft. During the battle, he distracts the UCAVs by abandoning his wingman. Jordan then gains altitude, which causes both the pursuing UCAVs and his F-35 to stall. He kills both UCAVs, but crashes his $157-million jet in the process.

“Hal would be working at Safeway and he would no longer be employed by that company,” F-35 test pilot Billie Flynn told Popular Mechanics. “Our job is to test the product of the companies that we work for, but we’re there to make sure the assets stay in one piece.”

Oddly, in a film that glamorizes the F-35, the jet’s performance is atrocious. The F-35 — like other advanced fighter aircraft including the F-22 Raptor — could easily fly at 50,000 feet or above without its engine failing and the plane crashing. Not so in Green Lantern. However, there is a risk at flying at such altitudes. If the cockpit suddenly depressurized, Flynn said, then the pilot would be at risk of losing consciousness.

When the non-superpowered fight superheroes, they accept no substitutes but the F-35. Then their planes are ripped apart by Hulk, blown up on the ground or fail at nuking New York.

Of the three F-35s to make an appearance in the 2012 movie The Avengers, two are destroyed within seconds of arriving on screen. The first is smashed when the scientist-turned-green rage monster Hulk goes on a rampage inside the Helicarrier, a flying vertical-lift aircraft carrier and base for the shadowy espionage agency S.H.I.E.L.D. The agency sends an F-35 after the Hulk, which doesn’t go well. Hulk shrugs off the fighter’s 25-millimeter cannon at nearly point-blank range, then throws himself at the plane, rips out its internal components and tears one of its wings off.

Later in the film, S.H.I.E.L.D. officials fear losing New York to an invading force of extraterrestrials. They order two F-35s to nuke the city. Nick Fury (Samuel L. Jackson) tries to stop them, and destroys one jet with a rocket-propelled grenade during takeoff. The other survives to fire a nuclear missile, which is then intercepted mid-course by Iron Man (Robert Downey, Jr.). Had the mission been successful, the F-35 would have the infamous distinction of killing millions. Instead, the F-35 has the distinction of merely trying to, while also crashing and blowing up a lot.

Perhaps it’s not surprising the Pentagon wasn’t a fan of movie. The military ceased cooperating with Marvel Studios during filming, after providing some military equipment. The reason? The fictional S.H.I.E.L.D. — a non-state organization with Pentagon — doesn’t appear to directly report to Washington.