Why the F-35 Will Soon Be Deadlier Than Ever 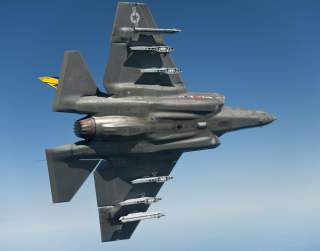 The Pentagon and Lockheed are pursuing a "Tech Refresh" effort with the F-35 intended to improve the stealth fighter's targeting attack technology, weapons delivery and on-board computing -- all as part of an effort to try to keep the F-35's combat effectiveness ahead of great power rival nations.

"These are hardware and software modifications to bring an integrated core processor, memory system and display screen," Winter said.

As part of this ongoing effort, Lockheed Martin has been working with Harris Corporation to provide the computing infrastructure for new panoramic cockpit displays, advanced memory systems and navigation technology.

The new hardware and software, to be operational on the F-35 by 2021, includes seven racks per aircraft consisting of 1,500 module components, including new antennas and weapons release systems. Other components include an Advanced Memory System (AMS) engineered to improve data storage and generate higher resolution imagery to help pilots with navigational and targeting information.

The data processing increase is exponential, developers explain, as it enables measurements to take place in terabytes instead of megabits or megabytes.The upgrades include a portable memory device which can quickly be transferred from a ground station to the F-35 cockpit.

The Air Force is already working on a 4th drop to be ready by 2020 or 2021. Following this initial drop, the aircraft will incorporate new software drops as quickly as possible. Block IV will include some new partner weapons including British weapons, Turkish weapons and some of the other European country weapons that they want to get on their own plane, service officials explained.

The F-35 is now conducting attacks, surveillance operations and combat missions with an updated on-board “threat library” of Mission Data Files engineered to identify enemy threats in key regions around the globe.

“The AORs (Areas of Responsibility) for current operations where our forces are -- currently have adequate Mission Data Files,” Winter said.

While many developers cite significant challenges when it comes to software development and integration for the F-35, the fighter is regarded by developers as a “flying computer.” The “fusion” or technical integration on board the aircraft is engineered to access and leverage a wide range of data points and condense them for the pilot. In essence, surveillance, computer processing and targeting data are fused, as opposed to being stovepiped or separate sources. As a result, the technology also incorporates Identification Friend Foe (IFF) surveillance systems designed to quickly distinguish friendly from enemy aircraft.

Osborn previously served at the Pentagon as a Highly Qualified Expert with the Office of the Assistant Secretary of the Army - Acquisition, Logistics& Technology. Osborn has also worked as an anchor and on-air military specialist at national TV networks. He has a Masters in Comparative Literature from Columbia University.