Why the F-35B Is An Amphibious Warfare Warrior 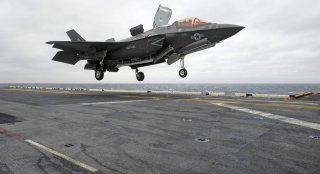 The U.S. Navy’s newest amphibious assault ship is now operating with F-35Bs. A Marine Corps F-35B landed aboard the USS Tripoli earlier in January, according to a press release.

The Tripoli is the second ship of the America-class amphibious assault ships. USS America has operated with F-35Bs for several years now, including one deployment with at least thirteen of the fifth-generation fighters aboard. The F-35B brings stealth ability to the ship’s air attack capability.

The USS Tripoli is operating with 3rd Fleet, an area which encompasses the central and eastern portions of the Pacific. After a series of flights with the F-35B, the ship received its fixed-wing certification.

The Navy built the USS Tripoli with specific accommodations for the F-35B. Earlier operations aboard USS America revealed some needed adjustments in construction on subsequent ships, The flight deck needed additional non-skid materials to handle the heat of an F-35B’s vertical takeoff and landing without being damaged. Several structures were also reinforced below the flight deck.

The F-35B is expected to reshape amphibious warfare tactics with its stealth and advanced computing ability. Amphibious warfare in the future is expected to feature fewer traditional beach assaults, and will be more dispersed and disaggregated. Long-range sensors and precision weapons, like those on the F-35B, should enable close air support.

F-35Bs could also destroy gun placements on shore intended to engage attacking forces. The aircraft could also find and destroy land-based enemy missile launchers. This kind of multi-domain amphibious assault can make an attacking force much more likely to succeed in establishing and securing a beachhead.