Why the F-35B Stealth Fighter Is Revolutionary 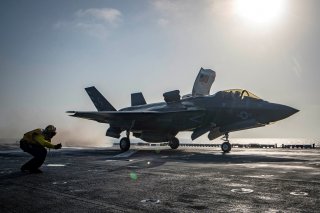 One of the lesser-known Lightning II variants, the F-35B is nonetheless slated to become a core pillar of the Marine Corps’ ability to project power.

Although commonly referred to in the singular, Lockheed Martin’s fifth-generation F-35 stealth fighter is technically three different planes: the F-35A conventional take-off and landing (CTOL) variant that is being procured by the US Air Force (USAF) to phase out the F-16 Fighting Falcon, the F-35B short takeoff and vertical landing (STOVL) variant that’s slated to succeed several of the Marine Corps’ aging fighters, and a F-35 catapult-assisted take-off but arrested recovery variant that’s optimized for operations from aircraft carriers. The F-35A is by far the most numerous of the three, with the Air Force seeking to procure just under 1,800 such units through the coming decades. But the fact that the F-35B and F-35C are being procured in smaller numbers does not make them any less significant for the key battlefield tasks that they are meant to perform.

The F-35B attained initial operating capability (IOC) in 2015. The fighter is principally slated to replace the 1980’s AV-8B Harrier II, which is rapidly approaching its planned 2025 sunset period after having its service life cut short due to mounting maintenance outlays. The F-35B is generally similar in dimensions to its F-35A counterpart, but there are several notable differences under the hood. The F-35B sacrifices about one-third of the F-35A’s fuel capacity, at 13,500 versus 18,250 pounds of internal fuel, to accommodate a shaft-driven lift fan (SDLF). Given these special design considerations, the F-35B also has a slightly lower weapons payload of 15,000 lbs and shorter combat radius of around 505 nautical miles. Still, the fighter features internal and external weapons bays that support the same weapons configurations as the F-35A.

The SDLF is, in essence, a lift system that gives the F-35B the unique capability to land vertically, in a similar fashion to a helicopter; it likewise helps the fighter to take off from short runways. The system works by generating a massive downward thrust that enables the plane to “hover.” It should be noted that F-35B’s STOVL capability is not a functionality trade-off in the sense that the fighter fully retains the ability to land on longer, conventional runways. Consider, also, that the F-35B’s slightly reduced range is offset by the fact that it can take off from and land in places where its F-35A counterpart cannot. It’s a similar story for the F-35C; whereas the former operates from aircraft carriers as part of U.S. Carrier Strike Groups (CSG’s), the F-35B can operate from smaller amphibious ships like the USS America. This means that amphibious assault formations can deploy their own fifth-generation stealth fighters without relying on the carrier fleets of nearby CSG’s, a major tactical boon for the Marine Corps. The F-35B’s “hover” ability opens new venues for scouting and close-air-support that are impossible for the other two F-35 variants and especially useful in the context of the Marine Corps’ amphibious assault operations.

The F-35B vastly outperforms the Harrier II that it is replacing in virtually every category, delivering a larger payload at a longer range and faster speed. The F-35B is exponentially more survivable due to its stealth-focused design, not only lowering operational risks across the board but also allowing the fighter to undertake deep penetration missions that would have been inconceivable for the Harrier. This comes in addition to the fighter’s revolutionary interoperability and networking features, with the F-35B able to act as a force multiplier for nearby surface, ground, and airborne units through its sensor fusion suite that can generate a dynamic, integrated picture of the battlefield.

There are currently fifty-seven F-35B’s in the Marine Corps' possession, of which just over two dozen are trainer units. As of its most recent aviation plan, the service aims to procure 353 F-35B’s spread across fourteen mixed-strength squadrons, two reserve squadrons, and two fleet readiness squadrons. “Game changer” is nothing if not an overused phrase in defense commentary, but one thing is clear: the F-35B will transform how the Marines wage war.