Why Facebook’s New ‘Reputation Scores’ Could Be a Freedom Killer 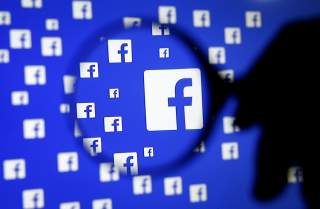 China’s modern surveillance state would make even George Orwell blush. In a move that

surpasses the Big Brother tactics found in the pages of “1984,” Chinese President Xi Jinping has finally amassed seemingly unlimited power and information over his people, and technology has helped him do it. Given recent developments in the social media sphere, it is not unimaginable that the United States could follow a similar path—and that should terrify Americans.

China has implemented a frighteningly holistic social credit score system. The system evaluates the online behavior of Chinese citizens, monitors their banking and social media information, criminal record, religious beliefs and countless other factors the government doesn’t publicly disclose. These behaviors are used to calculate a score that dictates whether a Chinese citizen can travel within or outside of China, where they can live, and what jobs they can hold—among other things. Liberty in China is set only to diminish as the technological instrumentalities for such policing continue to improve.

The South China Morning Post notes that China’s technology and data accumulation abilities are quickly expanding. The government tracks dissidents through China-based social media companies, facial recognition technology, and even through the roving eyes of Hunger Games-style robotic doves—used by over thirty government agencies in more than five provinces in China. In short, there is nowhere to hide from the prying eyes of government in modern China.

Elizabeth Economy, a senior fellow at the Council on Foreign Relations, writes in her book “The Third Revolution” that many Chinese citizens aren’t opposed to these tactics. In fact, according to the Chinese people she interviewed, many citizens consider the social credit score system a good method of achieving a social good through the policing of bad behavior by their neighbors. This might also be the case in part because reporting bad behavior of neighbors can improve one’s social score. This parallels a similar attitude to the post-9/11 PATRIOT Act mentality of Americans, accepting massive infringements on civil liberties and justifying it by telling themselves there one has nothing to fear if one has nothing to hide.

Yet what happens when the behaviors considered “bad” by the government are not clearly defined?

This is where the West is at risk of the same collapse of liberty we’ve seen in China. As I noted in The Hill, the attitudes for policing speech and some instrumentalities are already in place for a full American adoption of a similar social scoring system. But, until now, tech companies’ willingness to police online behavior has been limited to small infractions: an occasional ban of a high profile figure or small, limited admissions by Twitter and Facebook that their algorithms discriminate unfairly against conservatives.

That has now changed.

The Washington Post reports that Facebook has begun assigning individuals a “reputation score” designed to measure the “credibility of users.” This adds concern to an already discomforting environment where a person who has their YouTube channel demonetized and gets banned from Twitter has been all but silenced and is thus unable to meaningfully contribute to public discourse. Imagine a scenario where companies refuse to do business with individuals deemed “malicious actors,” as Facebook described it. This is clear thought policing coming from a surprising source: private enterprise.

The U.S. government has not yet commandeered data companies and social media to threaten American's liberty to the extent the government has in China. But, there certainly ought to be a concern for two reasons. First, while some states are considering more expansive data protection laws, there are not many current regulations or mechanisms in place protecting consumer data from unauthorized use by tech companies and nothing to stop from this data ending up in the hands of the government. Furthermore, the idea that four to five companies have enough dominance in the modern marketplace to—if they so decided—effectively make perceived “malicious actors” irrelevant in the public sphere is foreboding enough on its own.

The concern over censorship in tech even attracted the attention of the American Civil Liberties Union (ACLU) recently. The outspoken liberal organization stepped into the conversation to denote the censorship of highly controversial conspiracy theorist Alex Jones on several social media platforms as “worrisome.” Even the ACLU likely recognizes that there is no alternative for mass communication when your living is made on the Internet. There is no real Twitter competitor. There’s no viable substitute to YouTube. This goes, too, for the other social media giants. Therefore, these titanic companies now shoulder the great responsibility to curate a free market space for ideas, even if they are not technically bound by the First Amendment.

The evolution of technology brings about positive good—but also unintended privacy abuses. Amazon’s Rekognition software is already available to many police departments across the country, granting governments the ability to match faces to identities of Americans in real time.

The collection of American data through algorithms is becoming an industry on its own as was seen with Cambridge Analytica. Ample evidence exists that various government agencies even use drones to collect data on Americans. The sharing of data is even more troubling especially considering Facebook came under fire in June for sharing user data with some Chinese firms deemed national security threats. It will only get worse from here.

Responding effectively to changing attitudes and improved technology requires Americans to refocus on the principle of the First Amendment—to be more inclusive of speech. To accomplish this, Americans must implement limitations on technology use in the hands of the government. To curtail the government from potential abuses, necessary first steps include setting limitations on the content and duration the government can record and retain data on private citizens with their own government-owned instrumentalities while also creating barriers between private companies and the government from data exchange that would otherwise give improper and excessive information on private citizens.

When tech companies abuse their public forum monopoly, proactive remedies aren’t as clear without undermining a principled approach to the free market. Distancing government from data collection does protect liberty in the short term as market forces often curb corporate malfeasance even by oversized tech companies. The import lies in keeping government out of the business of collecting data on citizens.

Technology often outpaces the law, which is why lawmakers must anticipate and take corrective measures to protect privacy and speech. The road to a fair and free America was a long, bloody one and the path into a totalitarian China-like state is short. The United States will certainly take the short path if Americans don’t install the proper safeguards soon.

Tyler Grant is a Young Voices contributor, who completed a Fulbright Fellowship in Taiwan. His work has previously appeared in National Review, The Weekly Standard, and The Hill.