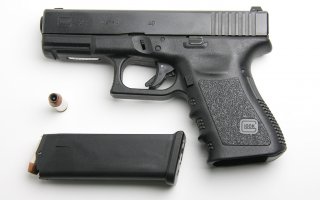 Often outshone by the much more popular Glock 19, the higher-caliber Glock 23 still has plenty to offer for the discerning shooter. While it may not be as easy to handle as the 19, the Glock 23 uses .40 caliber pistol ammunition, offering much more stopping power.

The increased power is the main reason why police departments all over the country assign the G23 over the G19, but the advantages of the weapon aren’t only for those in uniform.

Outfitted with .40 caliber ammo, the Glock 23 offers a solid middle-ground between the ease of use of the Glock 19 and the stopping power of larger calibers.

While seemingly identical to the Glock 19 when you first grip it, the Glock 23 sets itself apart as soon as you pull the trigger. Using .40-inch rounds adds a full millimeter in diameter to each bullet, and the effect on recoil is immediately noticeable.

Despite the increased felt recoil, which I’ll discuss in-depth later, the firearm remains as accurate as any other Glock I’ve used.

The Glock 23 comes with a plastic three-dot sight (one in the front, two in the back). As a no-nonsense gun, the stock sights do the job well enough, but I’d definitely recommend getting some aftermarket sights, especially if you plan to be able to use the firearm in low-light situations.

Glock has a well-earned reputation for making guns that you can trust your life with and the Glock 23 is no exception. This gun will shoot basically anything you put in it without any complaints.

In my usage of the weapon, it’s had zero malfunctions whatsoever. That seems in line with all the other Glocks I’ve owned and used throughout the years, so I’m not surprised in the least.

One thing I’m worried about is how the larger caliber might increase wear on the gun compared to the 9mm of a Glock 19. In any case, time will tell, and so far Glock’s pistols have stood the test of time.

As stated earlier, the Glock 23 is physically identical to the Glock 19, having the exact same dimensions and empty weight.

Like the Glock 19, then, the G23 is large enough to handle well, with a comfortable 4-inch barrel. The sights are easy to line up, and the plain, no-nonsense design of the pistol makes it easier to grip and handle.

Also identical to the Glock 19 is the 5.5 trigger pull.

The Glock 23 features a trigger safety system, requiring full purchase to depress the trigger. It doesn’t include a manual safety, which is part of its design as a defense weapon.

While I support any feature in a firearm that reduces the risk of accidental discharge, I appreciate the simple-but-effective design of a trigger safety.

If you’re ever in a situation where you’re forced to defend yourself, you don’t have time to check a manual safety, and the Glock 23’s trigger safety is designed with that situation in mind. At the end of the day, the best safety is one’s own situational awareness and discipline.

The reason the Glock 23 was designed was to recreate a pistol that was dependable and usable as the Glock 19, but outfit it with a larger caliber, the .40 round. As such, the magazine of the 23 holds fewer rounds (13) compared to the Glock 19 (15 rounds).

One feature of the Glock 23 is the interchangeable magazine release catch, which you can move to whichever side is more comfortable for you. While not as simple as an ambidextrous release, this feature is still nice for the southpaws out there.

Empty weight measures 21.16 oz, same as the G19, whereas a loaded magazine makes the G23 slightly heavier in comparison.

The Glock 23 measures smaller and lighter than the Glock 22, which uses the same .40 caliber rounds in a larger frame and magazine. This makes it more suitable for concealed carry, while maintaining the accuracy and stopping power of a full pistol.

The recoil on the Glock 23 is what really set it apart from the Glock 19, to me.

The 23 has significant muzzle flip as the steel slide moves backwards and then forwards into place. This made it harder for me to quickly line up the sights after a shot, and it took some getting used to.

I suppose there are some disadvantages to a steel slide on a polymer frame, and this is one of them. The muzzle flip really worked my wrist throughout the day, and was something that took me by surprise when using a gun that’s identical to the Glock 19.

Still, in a defense situation the added stopping power of the .40 caliber round should more than make up for the slower rate of fire of the Glock 23.

In terms of price, the Glock 23 is certainly a step up from the Glock 19, with regards to the gun as well as its ammunition.

With an MSRP of $600, the Glock 23 is still fairly affordable. The .40 caliber ammo, though, will cost you at least twice as much as buying 9mm rounds. With that said, there’s no other bullet as cheap and plentiful as 9mm, so it’s not the most fair comparison.

The Glock 19 is popular for a reason: cheap, easy-to-use, and widely available, Glock has made itself a household name.

But in actual combat, the 9mm ammo has left something to be desired, which is why the .40 S&W was invented for U.S. officials.

In comparison to the 19, the Glock 23 is more expensive and more difficult to use. But those drawbacks come with a much-needed increase in stopping power, making this pistol an incredibly effective option as a service pistol.

As a private owner, you’ll find that the Glock 23 serves as the perfect option for a no-nonsense pistol for home defense or everyday carry. The dependability and ease of use of a Glock with a higher-caliber bullet make this an excellent tool for self-defense.