Why a Full U.S. Boycott of China's 2022 Olympics Could Be A Mistake 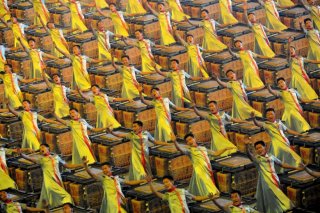 With calls to boycott the 2022 Beijing Winter Olympics gaining great attention this past month, one could assume the Olympic Games have not always been tied up with politics. History suggests otherwise.

As far back as the first recorded Olympic Games in 776 BC, a truce was announced to ensure athletes and visitors could safely travel to and from the host city. This truce still exists today per United Nations Resolution 48/11 of 1993.

Much like today’s Olympics, those of ancient Greece also advanced a state’s geopolitical objectives. Greek city-states used the games to announce alliances, assert hegemony over a region, or spread Hellenistic ideas in the Mediterranean. Although Rule 50 of the Olympic Charter prohibits any “kind of demonstration or political, religious or racial propaganda” in Olympic areas, the games have always been one part geopolitical conference to one part athletic competition. More likely than not, the Chinese government will utilize the 2022 Olympics as the Greek states did nearly three millennia ago. This poses quite a problem for the Western world.

Last month, numerous lawyers and politicians, thinkers and activists, drafted resolutions and pressured political officials to boycott the 2022 Beijing Olympics because of the Chinese government’s repression and abuse of Muslim Uighurs, Tibetans, and other minorities. One of the boycott's advocates, London human rights lawyer Michael Polak, filed a complaint with the International Olympics Committee (IOC) ethics commission because China’s human rights abuses violate the fundamental principles of “Olympism.” According to the organization’s charter, Olympism must be fostered “without discrimination of any kind, such as race, color, sex, sexual orientation, language, religion, political or other opinion, national or social origin, property, birth or other status.”

A handful of government officials have heeded these complaints. Lawmakers in Canada, the Netherlands, and the United States have advocated for a boycott of the Beijing Games based on Uighur repression. This past month, U.S. Representative Michael Waltz (R-FL) submitted H.R. 129 urging the U.S. Olympic Committee and the IOC to move the Olympics elsewhere. If the committees refuse, the resolution urges American withdrawal from the event. The case for withdrawal has strengthened as governments come to terms with China’s human rights abuses. This past January, the U.S. State Department concluded that the Chinese Communist Party’s policies of Uighur forced sterilization and internment camps were “genocide.”

Lighting the Torch, or a Firestorm?

So far, the official reaction to the boycott has been varied. Despite Waltz’s congressional resolution, the Biden administration remains ambivalent. Although the Canadian House of Commons unanimously voted to request that the Canadian and International Olympic Committees relocate the Olympics, the referendum was non-binding. In response, the head of the Canadian Olympic Committee, David Shoemaker, called the initiative “little more than a convenient and politically inexpensive alternative to real and meaningful diplomacy,” especially when Ottawa still maintains full diplomatic relations with Beijing. According to Shoemaker, the Group of 20 (G20) nations also agree with his views, following their reaffirmed commitment in November 2020 to attend the Beijing Olympics.

International commentators have built on Shoemaker’s dissent. David Lampton of the Johns Hopkins School of Advanced International Studies wrote in Newsweek that a boycott would also generate “counterproductive…behavior” by arousing Chinese nationalism. Professor Rana Mitter at Oxford University argued that hosting the Olympics in Beijing would invite “more journalists, activists, and curious minds” to visit and report on China, thus highlighting the government’s human rights abuses. Such a spotlight could force the CCP to lessen their abuses.

In response to these criticisms, Shannon Tiezzi analyzed the feasibility of boycotting the Beijing Games and even hosting an alternative winter event. Since 75 percent of all Winter Olympic medals have been won by countries in the developed world (or categorized as liberal democracies), Tiezzi argues that boycott of the Winter Olympics by developed democracies would make the games “a pale imitation of itself.”

The Ghost of Olympic Past

One of the key arguments for the boycott has relied on history, specifically the precedence of boycotting the 1980 Olympics. On January 14, 1980, then-President Jimmy Carter boycotted the 1980 Moscow Summer Olympics after the Soviet Union invaded Afghanistan on Christmas 1979. Despite the boycott, the Games went ahead as planned—and the Soviets stayed in Afghanistan until 1989. The only thing the United States gained by boycotting the Games was incurring a retaliatory boycott four years later during the 1984 Los Angeles Olympics.

Even if one overlooked a prior boycott’s ineffectiveness, a Beijing boycott makes even less sense than the one of Moscow. The Cold War was still rampant in 1980, with the world still divided into two spheres. The West could live and operate without the Soviet Union and the East—in fact, it had for more than three decades. The United States and its allies would be hard-pressed to act the same toward Beijing today. China and the United States are economically intertwined. One cannot isolate Beijing today as Washington contained Moscow for more than forty years. For America’s allies, the price of boycotting the Olympics and incurring China’s expected economic wrath and retaliation would be far too painful—especially for partners like Australia that have to walk a delicate, diplomatic tightrope with China or face more geo-economic retaliation.

The ghosts of Olympic past and present presage against a 2022 Beijing boycott. The gambit did not work in 1980, and it will likely bear little fruit today—but it could incur great harm or counterproductive consequences. In short, a boycott is a high risk, low reward—perhaps because its proponents expect too much. Boycotting is nothing more than a statement. It is not a hardball policy proposal that will force Beijing to end its abuse of the Uighur or Tibetan people. If Washington truly wants to stop these abuses it should work with like-minded partners to hold Beijing accountable by condemning, not just identifying, the “genocide.” The Biden administration could also economically sanction key decisionmakers, suspend consular operations in parts of China, devise more Quad partnership agreements (like the recent Asia vaccine rollout initiative), hold more Pacific military exercises, or publicly condemn the abuses at international summits (e.g., the G20).

If the United States only wants to make a statement at the 2022 Winter Olympics, so be it. But a full boycott goes too far. Creating a “Western Winter Olympics” will only highlight the increasingly precarious decision most nations now face: either support China or participate in a lesser alternative. What’s more, if America is in a “great power competition” with China, then shouldn’t it compete in all facets—including athletics?

The United States could, instead, authorize a diplomatic boycott of the event. This would allow athletes to compete while the government withdraws its public support and presence. Or, better yet, the American delegation should boycott the opening ceremonies. The United States supports athletic competition, but not a self-serving ceremony touting China's dubious record. And when China’s repression presumably worsens in the coming years, Washington should lobby the IOC to ban China from the games, much like it banned South Africa from 1964 to 1988 for its apartheid policies.

If the Olympic Games are going to be as much about athletics as geopolitics, Washington must play both well.

The views expressed in this article are those of the author and do not reflect the official policy or position of the US Navy, Department of Defense, or the U.S. Government.

In 1987, North Korea Tried to Destroy the Olympics