Why the Glock 42 Is One Tough (But Small) Gun 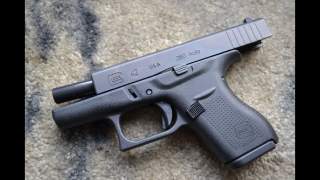 (This first appeared in early June.)