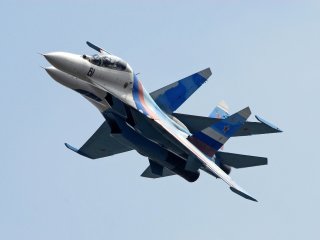 Alongside disturbing images of Russian missiles destroying apartment homes and a massive Russian convoy headed for Kyiv, there is a less visible war taking place in the sky. It is an air war that appears to be far more contested than some might have anticipated.

“The airspace over Ukraine continues to be contested. The Russians do not have air superiority over the entire country but there are areas where they have more control than others, and the same goes for the Ukrainians,” a senior Pentagon official told reporters, according to a Pentagon transcript.

The fact that the airspace is still contested is somewhat surprising and possibly speaks to the resolve of Ukrainian pilots. Global Firepower's 2022 military assessments reveal a massive discrepancy between Russian and Ukrainian airpower, with Russia operating 772 fighter jets and Ukraine operating only sixty-nine fighters. Why haven’t the Russians achieved air superiority?

While one would think that Russia would seek to exploit its numerical advantage in the air, the smaller Ukrainian fighter jet force may be outperforming the Russian attackers. On the other hand, Ukrainian air defenses may be proving more effective than Russia may have anticipated. A senior Pentagon official confirmed that Ukrainian air defenses were in fact working well, telling reporters that “Ukrainian air and missile defense systems remain viable, and intact, and engaged.”

The senior Pentagon official said that Russia has “lost some” fighter jets and that the Ukrainians have as well. The official said few specifics were available regarding the ongoing air war, and when asked by a reporter why the Russian convoy has not been attacked from the air, the official said the Russians may be protecting the convoy with air assets. At first glance, the convoy is certainly a visible target that would offer aircraft a clear opportunity to strike. “I can't tell you with certainty why this convoy hasn't been attacked. We have to assume that the Russians are aware that it is a very long convoy with a lot of vehicles and that they are going to be interested in trying to protect that as best they can, but I can't speak to the specifics of, you know, whether they have aircraft flying over it and what they're doing. But we have to assume that they have an interest in trying to protect it,” the official said.

Russia is likely protecting its convoy with its mobile S-400 surface-to-air missile system, which first emerged in 2007. As mobile weapons, the S-400 gives advancing Russian forces the ability to track and destroy enemy aircraft overhead. Ukraine’s air defenses, by contrast, are listed by Global Firepower as being Soviet-era Gauntlet systems. The digital networking, computer processing, and multi-frequency tracking capabilities of Russian air defenses are reported to be among the best in the world.

Airpower could be quite decisive in any kind of urban warfare scenario, as clusters of fighters behind buildings or otherwise obscured from ground targeting systems might be more visible from the air. In addition, precision-guided bombs could be employed to pinpoint specific high-value target areas. However, Russia would likely need some measure of air superiority in order to do so, and the Pentagon says that they simply do not have it. Are the Russians holding back air power? Or could they be rattled by the tenacity and resolve of Ukrainian pilots? The answer will likely be revealed in the coming days.