Why Impeachment Isn’t the Top Story in Ukraine 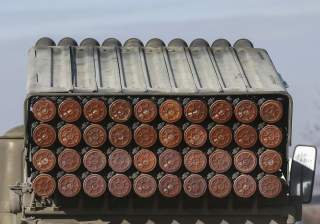 A long road lies ahead for Kyiv to secure a durable peace with Russia. Yet there are signs that the two sides are now closer than ever to striking a deal. In particular, a large-scale prisoner swap Sept. 7 between Ukraine and Russia was seen by many in Ukraine as a positive step toward new peace talks.

According to the Steinmeier Formula, Ukraine should make the next move by allowing local elections to be held in the Donbas under the supervision of monitors from the Organization for Security and Cooperation in Europe, or OSCE, the multinational group that has been monitoring the cease-fire for years.

If OSCE monitors deem the elections are legitimate, Ukraine’s parliament would grant the Donbas territories a special status of territorial autonomy. What that autonomy would look like in practice, however, is unclear.

Ukrainian representatives for peace talks with Russia have said that implementation of the Steinmeier Formula will move forward only if Russia meets certain demands, such as respecting a complete cease-fire, completing the withdrawal of foreign troops and weapons from Ukrainian territory, and a withdrawal of all forces from the current contact line in the Donbas.

Roughly 3,000 to 4,000 Russian regulars are now in Ukrainian territory, mainly in a command and control capacity, according to Ukrainian military reports. Critics of the Steinmeier Formula say that free and fair elections are impossible in the Donbas so long as those soldiers are on Ukrainian territory.

Even if all Russian troops leave the Donbas, though, Moscow would likely retain its influence. Russia finances the two breakaway territories, has offered passports to civilians living in the Donbas, and maintains tight control over the information environment.

The catch, therefore, is that if Russia maintains its sway over the separatist territories after they’ve elected representatives for Ukraine’s parliament, then the Kremlin will have achieved de facto voting rights in Ukraine’s national government. That “Trojan horse” scenario is at the root of many Ukrainians’ misgivings with the Steinmeier Formula.

“The problem is not in the Steinmeier Formula itself, about which we still know only partly. The problem is that we still have not reached a compromise altogether on what to do with Donbas,” said Oleksiy Honcharenko, 39, a Ukrainian member of parliament. “So now there are only two solutions—to lose the country or to lose the Donbas.”

Honcharenko advocated that Ukraine “freeze” the conflict and “fence off” the Donbas war zone, creating a stable security situation on par with the demilitarized zone dividing North Korea and South Korea. He also pointed to Germany as a historic example that Ukraine could emulate, noting how East and West Germany eventually reunited when the Soviet Union collapsed.

“The idea behind this is that [Russian President Vladimir] Putin’s regime will eventually fall and by that time Ukraine has to be strong to claim her territories back,” Honcharenko told The Daily Signal.

Despite the political risks, Zelenskyy’s administration has shown a willingness to go ahead with the controversial Steinmeier Formula.

The bottom line, according to the Zelenskyy administration, is that peace talks have been locked at an impasse for years and casualties continue to slowly mount. Also, foreign investors remain skittish about investing capital in Ukraine due to the war.

“Our task, the task of diplomats, unfortunately, is to negotiate, which absolutely doesn’t give us strength or pleasure, so that we can get out of the situation with the least losses,” Minister of Foreign Affairs of Ukraine Vadym Prystaiko said last week. “If you think that diplomats can agree without compromise—it is naive, and unfortunately, that won’t work.”

“Our task now is to find the art of the possible, how we can minimize our losses, to break free from the clutches of the aggressor and advance as we all decided,” Prystaiko said.

In 2014, the U.S. and the European Union levied punitive economic sanctions on Moscow for its invasion of Ukraine’s Crimean Peninsula and subsequent proxy war in eastern Ukraine.

Those sanctions have stood the test of time. The U.S. and the EU both have said that sanctions will stay in place until the Kremlin fulfills its commitments in implementing the Minsk agreements.

Those commitments include the withdrawal of all Russian troops from Ukrainian territory, the return of Ukrainian control over its border with Russia in the Donbas, and unhindered access for international monitors in the conflict area.

The EU and the U.S. also maintain separate sanctions on Russia for its 2014 seizure of Crimea.

For Moscow, therefore, the overarching objective of a peace deal in the Donbas is to secure sanctions relief from the EU and the U.S., some experts contend. For their part, leaders in Paris and Berlin lately have signaled their desire for détente with Russia, and so has President Donald Trump.

As a result, some quarters in Ukraine worry that Western leaders, in their haste to rejuvenate economic ties with Russia, would be willing to endorse a solution to the war that is not in Ukraine’s long-term best interests.

Ukraine is clearly on a non-return trajectory away from Moscow’s influence and toward a pro-Western future—a new reality to which the Kremlin is fundamentally opposed.

Consequently, even if a durable peace in the Donbas is achieved, it likely won’t mark the end of hostilities between Ukraine and Russia.

Looking forward, Lubkivskyi, the Ukrainian diplomat, told The Daily Signal that Zelenskyy should prioritize the maintenance of good, bipartisan relations with the U.S. as a hedge against the long-term threat posed by Moscow.

“Our state will engage in a consistent strategic dialogue with U.S. leadership, adhering to the principle of bipartisan support and engagement with the U.S.,” Lubkivskyi said. “We must understand that the sole beneficiary of the complication of Ukrainian-American relations is the Russian Federation.”