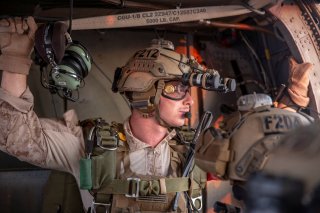 Armed Iranian troops fast-roped aboard a commercial ship near the Strait of Hormuz in what the U.S. Navy called a “blatant violation of international law.”

“This type of reckless, aggressive behavior by Iran destabilizes the region and threatens the rules based international order,” a Navy statement said. “We call on Iran to articulate to the international community the legal basis for its actions.”

Coalition Task Force Sentinel, the operational arm of the International Maritime Security Construct, monitored the incident, which included use of an Iranian Sea King helicopter supported by two Iranian ships in the vicinity.

The armed boarding calls attention to the high-risks in the Strait of Hormuz, a shallow region of narrow ocean along the Western coast of Iran. The Iranian military has often intimidated commercial and military ships in the area with swarming small boat, fast-attack tactics.

The area has also, over the years, presented a significant mine threat as well, something which has contributed to the U.S. Navy’s rapid development of countermine technologies.

There are a variety of reasons why Iranian small boat and air-assault threats bring particular concern in the Strait of Hormuz. The main concern is that the area is known as a critical choke point for commercial and military traffic in the Persian Gulf and Gulf of Oman. If such traffic were impeded, the economic impact would be global.

The area also naturally proves crucial for potential military operations in the region as well, given its proximity to areas of high-strategic importance in the Middle East.

Iran is known for provocations of this kind which have long been on the U.S. military’s radar, given the significance of the threat presented.

Small boat swarms could prove particularly difficult for many larger surface ships as they are intended to blitz and overwhelm defenses by virtue of attacking from multiple points at one time, thereby breaking through layered ship protections.

Given this threat scenario, the U.S. Navy has been training with and fast-tracking new groups of technologies tailored to counter helicopter raids, small boats and mines. Some of these include new applications of electronic warfare intended to jam electronic coordination between small boats or disable weapons systems. Other systems include stronger, wider-range and more precise deck-mounted guns engineered to find and destroy descending enemy helicopters.