Why Iraq Is Ripe for Conflict with Israel 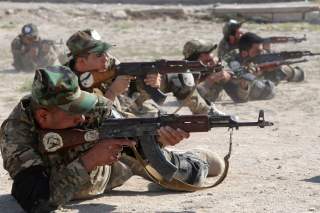 Israel has a strong military motive to strike such sites.

There's plenty of speculation as to who was behind four explosions at Iran-linked sites in Iraq, but no definitive proof. Authorities have yet to conclude that the explosions were all even intentional, but the evidence suggests that either sabotage or airstrikes were involved — and if so, Israel stands at the top of the list of potential culprits. That is leading to suspicions that Israel might be on the verge of expanding its anti-Iran campaign from Syria to Iraq as part of its regional strategy to check the threat of the Islamic republic. But if Israel is considering bringing the fight closer to Iran by expanding its campaign into Iraq, it could find the country far more combustible than even Syria — a quality that would have grave implications for its stalwart American ally and regional peace as a whole.

A Case of Whodunit

But first, the incidents in question. An explosion occurred at a Population Mobilization Unit (PMU) base near Amerli in Salahuddin province north of Baghdad on July 19; some local sources blamed the United States and Israel for the incident. Several days later, reports emerged of explosions occurring at another PMU base at Camp Ashraf nearer to the Iranian border. Then, on Aug. 12, a detonation rocked a PMU-linked ammunition depot south of Baghdad near al-Saqr military base. Most recently, on Aug. 20, explosions struck an arms storage facility near Iraq's Balad Air Base, 80 kilometers (50 miles) north of Baghdad, at sites associated with the PMU. Subsequent satellite photos have indicated that each of these locations suffered significant damage, while some evidence has suggested airstrikes might have caused the destruction. The Iraqi government itself has hesitated in assigning blame, although it said a drone strike caused the Aug. 12 explosion, prompting Prime Minister Adel Abdul-Mahdi to threaten to shoot down any plane or aerial vehicle that attempts to conduct another attack.

If the evidence proves that the explosions were not accidental, eyes are likely to turn to Israel, in large part because it has a motive, means and opportunity to conduct such operations. Each of the sites has been linked to Iranian ballistic missiles or rockets — whose buildup in Iraq was first reported by Reuters in August 2018. The Aug. 12 incident, for instance, occurred at a stockpile linked to the Sayyid al-Shuhada (League of the Martyrs) militia, closely linked to Iran's Islamic Revolutionary Guard Corps (IRGC) and Iraq's Iran-allied Badr Organization.

Israel has a strong military motive to strike such sites. Iran is trying to shift some of its assets to Iraq after repeated Israeli strikes against its equipment in Syria. Iran, which is seeking to increase its influence in Iraq, wants to establish a new front to deter Israeli attacks against its assets. Israel, in turn, has reason to take aggressive action to prevent such a buildup from creating a credible deterrence in a new theater separate from the Lebanese front against Hezbollah.

In addition to the military incentives, Israel has a political motive for staging the strikes: Likud, the country's ruling party, is playing up Prime Minister Benjamin Netanyahu's warnings from September 2018 that Israel would take action in Iraq as part of his bid to win nationalist votes in the Sept. 17 elections. That contest will be narrow, and for Likud, every vote will count.

Israel also has the means to stage such strikes. Its intelligence apparatus would be capable of sighting targets or conducting on-the-ground sabotage. The Israeli air force also boasts cutting-edge technology, which it has demonstrated in strikes in Syria against Iranian forces.

Finally, the Israelis have the opportunity. The Israelis fly the same aircraft as their U.S. ally, making it harder to track strikes back to Israel directly. This is especially helpful to the Israelis given that the Americans remain active over Iraq in continuing operations against Islamic State remnants. Even if the Iraqis could identify the aircraft as hostile Israeli jets amid the thicket of similar U.S. aircraft, they lack air defenses or an air force capable of stopping many of them — a marked contrast to Syria, where Russian air defenses hamper Israeli operations. Finally, to add to the opportunity, the Iranian buildup in Iraq is still in its early stages: by striking it as it forms, Israel has more chance of hurting Tehran now than it would if it waited until the Iranian presence was firmly established.

A Regional Can of Worms

If Israel intends to expand its anti-Iran operations to Iraq, there will be substantial ramifications for Iraq, the United States, Iran and Israel itself. For the Iraqis, Israel's move to bring the fight to its soil will stir up internal political problems that affect Baghdad's foreign relationships, particularly as most Iraqis are loath to see their country become even more of a proxy battleground among Iran, Israel and the United States.

In such a scenario, Iraqis of differing political stripes — including nationalists like Muqtada al-Sadr to pro-Iranian actors like Hadi al-Ameri of the Badr Brigade to anti-Iranian demonstrators and politicians, like the anti-Tehran elements of the Basra protest movement and Sunni political parties — will unite to pressure Abdul-Mahdi to prevent such violations of national sovereignty.

That pressure, of course, will compound the turmoil in the Iraqi political system, creating diplomatic problems for Baghdad with the two capitals it cannot afford to alienate: Washington and Tehran. Some will seek to penalize the United States, since Iraq cannot directly retaliate against Israel itself. That would complicate America's security relationship with Baghdad and expose U.S. assets in Iraq to retaliation. Such a violent response could come from the PMUs that are targeted in drone or airstrikes, Iranian forces in Iraq or otherwise non-political Iraqi protesters. As a result, U.S.-linked companies and assets could face the ire of anti-U.S. and anti-Israel forces inside Iraq.

And while the United States is an obvious target for pro-Iranian forces in Iraq, so too are other countries that are growing closer to Israel, like Saudi Arabia, the United Arab Emirates and Bahrain. In June, Iraqi demonstrators attacked the Bahrani Embassy in Baghdad after Manama's foreign minister publicly floated the idea of normalizing relations with Israel, and other embassies and assets linked to these states could also become targets. Such anger could also scuttle projects like Saudi Arabia's construction of a massive new stadium in Iraq.

If the Local Tide Turns on Iran

Other factions, however, would blame Iran and pressure Baghdad over its relationship with Tehran. Already, Iranian-backed PMUs are irking more nationalist, Sunni and anti-Iran factions. Despite repeated attempts to bring the PMUs into the Iraqi security fold, the forces continue to resist Baghdad's control, including defiance by most groups of an Aug. 1 order to standardize rules of engagement — upsetting many Iraqis who are wary of their power. Some citizens would likely blame the units' coziness with Iran and its refusal to fully integrate into the Iraqi army as the reason for any Israeli attack. That would subsequently fuel intra-Iraqi tensions, threatening Baghdad's ability to conduct operations against the many militant groups (including the Islamic State) that remain in Iraq, in addition to hurting the relationship with Iran.

If Israeli forces were to begin a sustained campaign against Iraqi-based Iranian assets, it would create problems for the Islamic republic beyond the mere loss of proxies and materiel in its western neighbor. For one, it would seriously strain the credibility of Iran's regional strategy to use proxies other than Hezbollah to deter Israel. That, consequently, would have domestic ramifications at home: the expeditionary wing of the IRGC, the Quds Force, would face challenges if it fails to produce results against Israel it has promised.

And then there's the prospect of a greater conflagration with the United States that Iran must worry about. Should Iraqi anger against Israel rise sufficiently to inspire attacks on U.S. forces or assets, U.S. retaliation may even drag Iran into a proxy conflict that could culminate in a wider U.S.-Iranian war. Since Iran does not exert total control over all its Iraqi proxies (many of which follow their own domestic agendas), this presents a potent risk going ahead, especially if Israeli strikes kill large numbers of Iraqi civilians or hit particularly sensitive targets belonging to the PMUs. Even in the absence of a regional war, there is a distinct possibility that Iran could find itself in a high-stakes proxy conflict with Israel in Iraq.

What It Would Mean for Israel

Finally, for Israel, the successful expansion of its front to Iraq would embolden its anti-Iran strategy — especially as it enjoys the firm backing of the current White House. The country may be encouraged to consider more assertive action against Iran beyond Iraq; one option includes intelligence operations in Yemen, where the Houthis are becoming more integral to Iran's regional strategy (as evidenced most recently by a Houthi donation to increasingly cash-strapped Hezbollah and a high-profile visit to Iran by the rebel group's leaders). Israel is concerned about Yemen out of fear that the Houthis could target Israeli shipping passing through the Bab el-Mandeb, the waterway between Yemen and Djibouti. Closer Houthi-Iranian connections, as well as a desire to build relations with Saudi Arabia and the United Arab Emirates, which oppose the Houthis, have also encouraged Israel to expand its intelligence sharing in Yemen with the Saudi-led coalition.