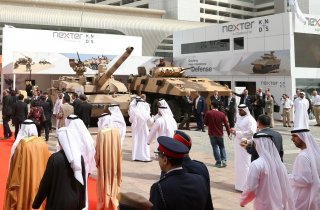 Israeli defense giants and start-ups are looking forward to the usually massive defense exhibition called IDEX in Abu Dhabi. The pandemic has put a stop to many large exhibitions in the past year but the United Arab Emirates is committed to having IDEX this February 21 for four days. It is the largest defense exhibition and conference in the Middle East of its kind. According to ISDEF, a part of the Avnon Group, which is arranging Israel’s pavilion, there may be 1,250 exhibitors from sixty-two countries. More than 100,000 people have attended in the past.

ISDEF was quick last year to jump on the opportunity to play a part in IDEX. Usually, ISDEF arranges a defense and homeland security exhibition in Israel every two years. It had to cancel last year and this is an opportunity to showcase Israel’s leading technology to the Gulf, where deep pockets and innovation come together to make defense deals the talk of the region. The UAE, for instance, is seeking to acquire F-35s from the U.S. in a deal the new Biden administration has paused. For the Gulf states, per capita spending on arms is among the highest in the world. The UAE and Saudi Arabia are sometimes listed as among the largest arms importers.

Around forty Israeli companies are expected at IDEX and these will include Israel’s three defense giants, Rafael Advanced Defense Systems, Elbit Systems, and IAI. Elbit, alone among the three, is not discussing its participation. IAI and Rafael have put out details of what they expect to show. Aeronautics, which makes drones, was one of the early companies to confirm its participation. It will likely bring an Orbiter 4, its latest runway-free drone. IMCO, an Israeli company that integrates systems has said it is presenting a range of solutions from drones to communications and command and control systems.

Rafael is highlighting its presentations for both IDEX and the companion naval show called NAVDEX. “We are honored and proud to participate in this defense exhibition, as we usher in a new era in the relations between our nations,” said Rafael’s President and CEO Yoav Har-Even, in a statement. Rafael has a huge range of solutions, from software-defined radios to cyber solutions. It says it will showcase its naval remote weapons station that can destroy drone threats, as well as its naval Spike. The Spike can be configured with the Typhoon MLS-NLOS, housing multiple missiles. Electronic warfare and vessel protection suites will also be on offer. The company is also talking up coastal defense solutions, a nod to the unique challenges that the UAE or other countries might face in the Gulf.

Another Israeli company attending is called Smart Shooter. It makes the Smash 2000 and Smash Hopper. The first is a sight for a rifle that aids the shooter so that they don’t fire at the wrong target, for instance hitting civilians. It can also help in shooting down small drones, releasing a round only when the moving target is back in the gun’s sight. The other system is remotely controled. “Weighing approximately 15 kg, Smash Hopper is ideal for deployment on various lightweight manned and unmanned vehicles and platforms, with a wide range of applications. Offering day and night capability with automatic scanning and target detection, Smash Hopper is ideal for multiple mission scenarios including force protection, border security, anti-drone, remote ambush, and other low-profile operations in complex urban environments,” the company says.

Michal Mor, the CEO says that Smart Shooter offers soldiers new technology. “Smart Shooter’s Fire Control Solutions are fielded and in operational use by friendly forces around the world, including the IDF and the U.S. Special Forces, and we are honored to present them at the IDEX exhibition in Abu Dhabi.” These systems have been sought by the U.S. Army and other countries. IAI’s CEO Boaz Levy also praised IDEX as a “harbinger” of long-term activity in the UAE and in the region as a whole.

For Israeli companies, the ability to publicly do business is a major game-changer in the Gulf. This has all happened openly since the Abraham Accords were signed in September. More than 130,000 Israelis have been to Dubai. New lockdowns and an airport closure in Israel may create some hurdles. Some companies wondered how to get their people to Abu Dhabi and organizers of the pavilion were perplexed by the decision. However, many of the larger companies have personnel in other countries and subsidiaries. For instance, Israeli companies recently came back from Aero India. The Gulf offers many opportunities, as it has historically for Israel. This is because the UAE and Israel already share interests and a regional outlook. Israel’s Prime Minister visited Oman in 2018, even though the countries do not have relations. Now Israel has relations with Bahrain and the UAE. While Kuwait is more cold to Israel, Saudi Arabia appears more flexible. Qatar has had a complex relationship with Israel in the past, funding Hamas-run Gaza, but cultivating pro-Israel voices.

The overall picture is that Israel’s advanced technology plugs in well in the Gulf. This is true for Israeli start-ups in all fields, from financial technology to food. When it comes to military sensors, such as advanced surveillance, monitoring, and coastal defense, there is a lot Israel has to offer. In addition, Israel’s drive into artificial intelligence has a lot of interest in the Gulf because local companies and innovators have also sought to make UAE cities into “smart cities” using more technology and AI. Defense industries are not just about guns and tanks, these days it is more about optics and finding the right target, and using precision to deal with threats while not harming civilians. Israel has pioneered defense systems such as Iron Dome air defense and Trophy, a system that is on tanks. While these systems are not making their way to the Gulf, according to public reports, the overall context is that Israel is a leader in defense and detection, such as Elta and Rada radars, and these countries need to detect threats and defend against things like drone swarms.