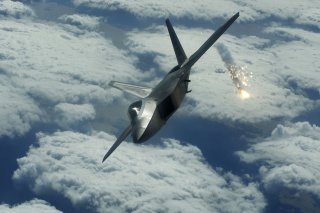 The government of Israel has reversed course and now said that it has no objection to the sale of the Lockheed Martin F-35 Lightning II Joint Strike Fighter to the United Arab Emirates, and Israelil Engery Minister Yuval Steinitz has been quoted as saying, "I have no doubt that if they (Qatar) want it and are willing to pay, sooner or later they will get it."

While Jerusalem has accepted that its Arab neighbors could eventually operate the fifth-generation stealth aircraft, it is most likely is looking to maintain its military edge by purchasing other advanced military platforms – and that could mean the Lockheed Martin F-22 Raptor.

At issue is that unlike the F-35, the F-22 program ended in 2011 with just 195 aircraft produced. The program was cut due to the high cost, but also a ban on exports. Again, unlike the F-35, which has numerous foreign partners, the F-22 cannot be exported under U.S. federal law so as to protect its stealth technology and other classified technologies. A 2010 defense authorization bill did include a provision that required the Department of Defense (DoD) to prepare a report on the costs and feasibility for the export of an F-22 variant, yet the U.S. Congress has upheld the ban on foreign sales.

Israel is not alone in expressing interest in the advanced stealth aircraft. Australia and Japan have also shown interest in purchasing the aircraft but to date both friendly governments have had to settle for the F-35 instead. There are currently eight international partners in the F-35 program including the United States, the United Kingdom, Italy, the Netherlands, Australia, Norway, Denmark and Canada – while Israel, Japan, South Korea, Poland, Belgium and Singapore either operate or are procuring the aircraft.

Israeli defense officials have said that the purchase of the F-22 isn't currently on the table, but there is hope in Jerusalem that the military assistance agreement with Washington could be modified at some future date. That could allow the Israeli Air Force to operate the Raptor, which by many accounts remains the most advanced fighter in the world in terms of maneuverability, armament and range. Senior Israeli defense officials have said that such a purchase of the advanced air superiority fighter would help preserve Israel's quantitative military edge in the region.

However, a bigger issue could be that the aircraft isn't in production, and hasn't been since 2011. Restarting the program would be astronomical to say the least. The other issue is that the aircraft in service are largely considered overdue for an upgrade.

While the F-22 may have been allowed to fall behind the F-35 in a few aspects during the Iraq and Afghanistan wars, the military's refocus on a peer or near-peer engagement has thrust the F-22 back into the spotlight again, with upgrades to match. With updates, the U.S. Air Force expects to fly its fleet of F-22s well into the 2060s.

Image: A F-22 from Kadena Air Base in Japan put out Flare during a training flight/U.S. Air Force.