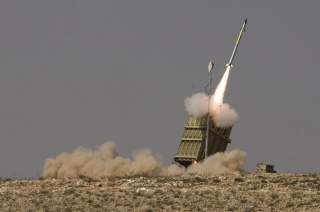 A rocket attack on an Iraqi base northwest of Kirkuk killed one U.S. contractor and wounded four U.S. troops on December 27, leading to U.S. retaliatory airstrikes against an Iranian-backed militia in Iraq and Syria. More than a dozen rocket attacks have been carried out against bases where U.S. forces are present in Iraq. These have increased in the past months, but there were also harassing attacks in May and June.

The U.S. military has been looking for an interim missile defense capability. This includes the desire to acquire an Interim Maneuver Short Range Air Defense System (IM-SHORAD) that can counter rockets, drones and other threats. The army has looked at several solutions at White Sands Missile Range, including Israel’s Iron Dome. Congress has prodded the military to act. In January, the United States chose to procure several Iron Dome systems from Rafael. The deal was announced in August. But the army indicated it didn’t want more of the systems, seeking to go in a more maneuverable direction.

Israel’s Rafael Advanced Defense Systems has been showcasing a mobile Iron Dome called I-Dome that protects against mortars, rockets, and artillery. It is mounted on a truck with radar and its battle management control and ten interceptors in two five-tube groups. Rafael says Iron Dome has carried out more than 2,000 interceptions in Israel with a 90 percent success rate. In the last year, Israel has had to defend against more than 2,600 rocket attacks from Gaza. Using technology that plots where the rockets will hit, Israel’s Iron Dome doesn’t intercept every rocket, rather seeking out those that are heading for populated areas or pose a direct threat.

The rocket threats now emerging in places like Iraq show how militias armed with relatively simple technology can pose a deadly threat. In the Kirkuk incident, thirty-two Iranian 107mm rockets were fired from the back of a Bongo-style truck. The rocket tubsd were converted and layered in the back of the truck, easily concealable beneath blankets. Iron Dome or a system like it would likely have intercepted the rockets.

The attack on Saudi Arabia’s Abqaiq in September also shows the need for more sophisticated multi-layered air defense of the kind Israel has developed. Israel is facing unique challenges but also challenges that other countries face. This includes the need to defend fixed areas from rockets and mortars as well as the need to confront a variety of threats, such as drones and missiles. Iranian-backed groups have sought to launch drones at Israel in February 2018 and August 2019. In addition, they have fired rockets at Israel from Syria. Israel has activated its Arrow 3 and David Sling for the first time against these threats, as well as using Iron Dome and Patriots. It is this mix of different interceptors against a variety of threats that looks like the kind of technology that would have aided U.S. forces in Iraq over the last year as they increasingly come under threat from rockets.