Why Is Japan Building A Missile Defense Site In A Tsunami Zone? 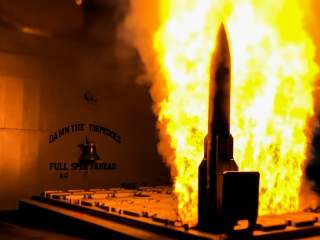 Of all the places to build a missile defense battery, why pick a site that might end up underwater?

Japanese officials are trying to explain why the location for an Aegis Ashore missile defense installation happens to be an area that could be inundated by a tsunami.

Japan’s Defense Ministry recently admitted that “the area where it planned to install the Aegis Ashore’s radar system and missile launchers fell in a section that prefectural officials predicted was at risk of being inundated by a tsunami of between 2 and 5 meters [7 to 16 feet],” according to Japanese newspaper Asahi Shimbun.

Japan is buying two Aegis Ashore systems, which are land-based versions of the U.S. Navy’s Aegis naval anti-missile system, at a cost of about US$2.2 billion. One is slated for the Araya site in northern Japan, and the other at the Mutsumi military training site in southern Japan. They are supposed to stop a wave of North Korean ballistic missiles, but the waves that threaten it now come from undersea earthquakes, such as the 2011 Fukushima tsunami that slammed northern Japan and damaged three nuclear reactors.

Finding suitable missile defense sites in narrow, mountainous Japan isn’t easy. The Defense Ministry examined 20 sites. “The five criteria to determine suitability included whether tall mountains exist nearby that could block radar pulses, the stability of electricity and water supplies and vulnerability to tsunami,” Asahi Shimbun said. “The report assessing the tsunami risk to Araya and the other 19 sites, said four would be significantly affected and another four less so.”

Araya was chosen because it is flat and faces the Sea of Japan, across from North Korea.  “The report made no mention of the Araya site being in danger of swamped by tsunami,” Asahi Shimbun noted.

Defense Minister Takeshi Iwaya has admitted that there is a chance the site could be flooded by a tsunami, though he added that “most of the training area is unlikely to be submerged.”

“I suspect ministry officials did not refer to the risk of tsunami in the report on the assumption that the impact of such could be averted if work was undertaken to elevate the land,” Iwaya said.

Tidal waves aren’t the only issue plaguing the controversial missile defense project. Several alternative sites were ruled out because of a mistake using Google Earth. “For example, the actual elevation angle of a mountain peak at the site in Oga, Akita Prefecture, was 4 degrees,” said Asahi Shimbun. “But it was listed as 15 degrees in the ministry’s report. According to the ministry, officials who drew up the report produced a cross-section diagram using the virtual globe in the Google Earth Pro app. But they did not realize that the diagram created was exaggerated vertically to highlight the undulation of the mountains.”

These issues will only fuel resentment among residents living near the two missile defense sites, who already worry about health risks from the Aegis system’s powerful radar pulse, as well fears of being targeted by North Korean missiles.

The furor in Japan illustrates a problem for ballistic missile defense: no one wants missile launchers and radar sites in their neighborhood. In the 1960s, when the Pentagon proposed building the Safeguard missile defense system and its nuclear-armed interceptor rockets, the residents of several American cities protested against prospective installations in their area. The project was ultimately scaled back to two, largely symbolic, sites guarding ICBM silos in North Dakota and Montana.