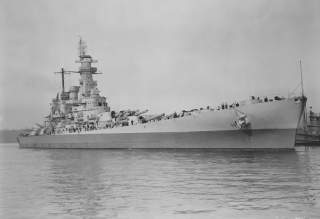 The Japanese poured fire into South Dakota, leading to severe damage and electrical failures. The Japanese lacked radar, however, and didn’t notice the approach of Washington. Washington subjected Kirishima to a withering, point blank barrage of sixteen- and five-inch shells, reducing it to sinking condition in about ten minutes. The rest of the Japanese force retired shortly afterward. Washington suffered no damage