Why Kazakhstan Sidelines Its Uyghur Cousins 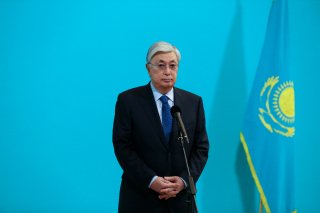 To put it simply, Kazakhstan’s relationship with Xinjiang is complicated.

Kazakh officials, like those of many Islamic-majority nations, have been largely silent about the misery of ethnic Kazakh prisoners being held in Xinjiang alongside Uyghur Muslims. This is despite the presence of some 200,000 diasporans from China's Xinjiang region in the post-Soviet state, many of whom have existing ethnic links to Kazakhstan.

Of course, there has been some public concern expressed about the swathes of Turkic Muslims, including both ethnic Kazakhs and Uyghurs, facing genocidal restrictions in Xinjiang. Families of Kazakhs detained in Xinjiang have held demonstrations outside the Chinese consulate in the commercial hub of Almaty for over 600 days, pleading for information about the whereabouts of their relatives. In Xinjiang, relatives of many Kazakh nationals remain detained in brutal "re-education centers" and forced labor facilities.

Police arrested several protesters, with some being fined the equivalent of $8,400—equal to an entire year’s average salary in Kazakhstan. Visits of senior Chinese officials to their northwestern neighbor have corresponded with heightened arrests and harsher financial punishments.

As analyst Berikbol Dukeyev recently outlined in an article for The Diplomat, the post-Soviet state's unfairly balanced education system is somewhat behind this disjointed and troubling approach.

Official stories in school books encourage young Kazakhs to support the return of relatives from Xinjiang to Kazakhstan. Since the 1800s, Chinese territories have been home to over 1.6 million ethnic Kazakhs. The same stories also support a favorable view of China, which continues to dominate the history textbooks required in state schools.

Part of the explanation for widespread complacency about the reasons for the picketing actions in Almaty lies in the vague pro-China sentiments that now dominate Kazakh institutions. Recent state-sponsored and approved textbooks strongly emphasize the need to increase the number of ethnic Kazakhs in Kazakhstan while repatriations are discussed. This is considered a key element for the increased social cohesion of the country. According to these textbooks, Kazakhstan's transition to a mono-ethnic state will greatly strengthen its sense of historic identity and unite the country.

One tenth-grade textbook on Chairman Mao Zedong's programs states that despite his era’s unbalanced growth and agricultural failures, China has developed into a nuclear and space power. But neither the Great Famine nor the Cultural Revolution is awarded a passing mention. These textbooks use the Great Wall of China and the Terracotta Army sculptures to represent China's military power. Young people in Kazakhstan were asked to support the return of their relatives from abroad during their first years of school. Protesters outside the Chinese consulate expressed this, demanding information about relatives in neighboring Xinjiang province.

Such books suggest that despite Kazakhstan’s centuries-long history of ethnic diversity, stability can only be maintained if the indigenous groups that represent up to 80 percent of the population rule the roost. Eleventh-grade history textbooks claim that ethnic returnees, including those from Xinjiang, tend to have large families, which helps to reduce labor shortages, promote the status of the Kazakh language, and redress the horrors of the Soviet era.

Kazakh nomads fled to Xinjiang during the engineered Communist famine of the early 1930s. The descendants of these people are among those trapped in the Xinjiang camp system and are currently trying to leave for their ancestral home of Kazakhstan. By offering them the opportunity to emigrate to Kazakhstan, the government has long tried to persuade this group to return home. Official textbooks highlight the contributions of ethnic Kazakh returnees to Kazakh culture, music, and sport, portraying them in a positive light.

Kazakhstan’s strategic location as a historic Silk Road outpost and its vast borders with the European steppe and Caspian arena, not to mention its internal imbalances, make it a prime target for Belt and Road cash and the Chinese Communist Party’s (CCP) influence. While individual Kazakhs and groups will surely continue to push for justice for Uyghurs and Kazakhs facing the less acceptable face of Chinese expansion, it is hard to see a huge rethink of the government's approach. While Western observers are keen to categorize any resistance in Kazakhstan (or any non-democracy) as a step toward liberal democracy, the country’s recent demonstrations have largely exemplified frustrations with economic chaos and corruption rather than a cohesive movement for reform. Kazakhstan is stuck between a rock and a hard place, and its ruling elites do not have the will or the resources to rock the geopolitical boat.