Why the Lucrative (But Illegal) Market for Primates Must End 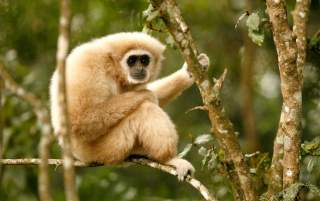 The trade in African primates is a hugely lucrative business. Every year it involves hundreds of thousands of animals and threatens the survival of wild populations. Marilyn Norconk explains why this is big business and what can be done to put a stop to it.

Which primates are being traded the most and between which countries?

The primate trade can be local or international, legal or illegal. It’s complex and often secretive, since most primates are legally protected from hunting and exportation. International agencies, such as the Convention on International Trade in Endangered Species of Wild Fauna and Flora, try to regulate and document the trade of animals and plants to protect them from over exploitation.

The illegal trade, which Interpol now recognises as “wildlife crime”, is difficult to track but of deep concern since about 60% of primate species are now threatened with extinction.

In 2017, the Observatory of Economic Complexity reported that primary exporters of primates were Asia (55%) and Africa (25%), simply because most primates are indigenous to tropical habitats. The primary importers were North America (50%), Europe (31%) and Asia (19%).

Because of the illicit nature of the trade, it’s hard to know exactly how many animals of each species are traded, alive or dead, each year.

But to give some idea, the average value of the market for African live apes – bonobos, chimpanzees and gorillas – is somewhere between US$2.1 million and US$8.8 million each year. A single infant or juvenile chimpanzee is estimated to be worth as much as US$70,000 on the international market.

In relation to bushmeat, in West Africa, it’s estimated that 150,000 primates – from 16 species – enter the bushmeat trade in Nigeria and Cameroon each year.

Why, and how, are primates being trafficked?

The trade in live and dead primates is lucrative because of a high demand.

Live primates are in high demand for the pet trade and for entertainment – such as circuses, films and commercials. Some of the most targeted African primates for the pet trade include chimpanzees, barbary macaques (from Morocco), lemurs (from Madagascar) and galagos (bush babies).

Barbary macaques from Morocco, usually illegally exported to Europe, provide a well-documented example. Young macaques are poached from the wild to be used as pets in the international market, and as photo props and pets in Morocco and Algeria. The trade in macaques, in addition to habitat loss, has caused a massive decline to just 4,000 to 5,000 monkeys, down from an estimated 17,000 in 1975.

Young primates also often enter the illegal pet trade stream as a side effect of bushmeat hunting. In a common scenario, an infant, that survives the killing of its mother for food, could remain in the village as a pet or be sold to a local animal trader for the international market.

While the live trade is huge, the bushmeat trade – for food or magic – also takes a huge toll on primate populations.

Approximately 8,000 chimpanzees, gorillas and bonobos are killed each year for food. In Nigeria, chimpanzee body parts are widely sought after for magic. African pottos are also hunted extensively and used in traditional medicine or for food in several west and central African countries.

What’s the impact of the trade?

The impact of the live primate trade on wild populations is a serious problem because, along with the problem of habitat loss, it can threaten the survival of a species. For instance, the chimpanzee population has declined from an estimated 600,000 individuals to less than 250,000 since the 1960s. This is primarily because of deforestation and bushmeat trade.

Because primates are slow breeders, their populations do not recover quickly. The period between births is often longer than two years. For the African apes (chimpanzees, bonobos and gorillas), inter-birth intervals may exceed four years.

The combined impact of the trade in live primates and habitat loss is very worrying. About 60% of primates are listed by the International Union for Conservation of Nature as “vulnerable” or “threatened with extinction”. Madagascar’s lemurs are now the most threatened group of mammals in the world.

The effect is not only about numbers extracted from the wild population. The impact on individuals is tragic. Primate infants are physically and emotionally vulnerable without their mothers.

What can be done to address this?

There needs to be a change in behaviour to reduce the demand for primate pets. The trade is currently driven by a thriving international market for pet primates. And social media now helps to drive this as an increasingly popular platform to advertise and trade the wildlife.

Potential consumers must be made aware that young primates have a very low chance of survival during capture and transportation in the pet trade.

In primate habitat countries, better training and higher wages for wildlife officers are critical to reducing the pet trade. So is community education. A good example of this is from the Jane Goodall Institute, dedicated to the conservation of chimpanzees. It has adopted a community-centred conservation approach which relies on cooperation between three distinct entities: law enforcement, environmental education programmes and sanctuaries.

Also important is the safety of confiscated animals. Some will be released back into the wild, but because many will have been taken when they were young, they would need to learn to find food, avoid predators and build a social community. This means many will end up living in sanctuaries for the rest of their lives.

The primate trade is complex. Ultimately, to put an end to it, we need better enforcement of existing laws and people in exporting and importing countries must be better educated about the negative impact of the trade on individuals, and potentially an entire species.