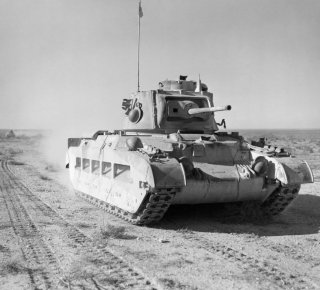 The Matilda tank was one of the few tanks respected by German tankers. Here’s why.

The Matilda II, or just Matilda as it was later called, was what the British called an infantry tank. As opposed to bigger cruiser-style tanks with heavier guns, infantry tanks were meant to accompany infantry and overwhelm enemy positions. To serve this purpose, the Matilda had a relatively small 40 millimeter main gun. Though adequate for infantry support, it had limited penetration against armor targets.

Interestingly, the Matilda came equipped with a 7.92 millimeter machine gun that shared the same ammunition that Germany used for its machine guns and rifles. Captured German ammunition could therefore supplement British standard-issue ammunition.

The Matilda tank was also designed to resist enemy artillery shells. Its armor protection was typical for British infantry tanks—very thick. In North Africa, Matildas enjoyed the heaviest in-theatre armor and were virtually impervious to early Italian and German anti-tank rifles and other tanks. The angled nose was over 78 millimeters, or three inches thick, the hull side armor was likewise 2.5 to nearly 3 inches thick, and the rear was 2.2 inches thick.

During the North African campaign, captured equipment such as tanks and trucks regularly switched hands, and the Matilda was no exception, though this did cause some confusion during the heat of battle. The Germans thought highly of the Matilda, and captured hulls served in the Afrika Korps ranks.

Their greatest strength—armor—was also the Matilda’s most limiting factor. Due to their high curb weight, they had a slow top speed. The Matilda’s engines did not help either. Rather than one diesel engine, two were installed. In fact, they were the same engines used in London public buses!

But output was quite limited and under 200 horsepower. The dual-engine arrangement provided some redundancy though. If one engine failed, the other could still power the tank, though maintenance was time-intensive, since double the amount of work had to be done to service one tank. Top speed was barely above 15 miles an hour on-road, and just 6 miles per hour off-road, though this was not initially seen as a problem, since unmounted infantry could not travel much faster.

During the early years of the North African campaign, from 1940 to 1942, Matildas ruled the roost, especially against lightly armed and lightly armored Italian tankettes, light, and medium tanks. They were virtually indestructible to Italian and German artillery and until the Afrika Korps brought 88-millimeter anti-aircraft guns into service against British armor.

The Matilda’s demise in North Africa was caused by attrition, as destroyed hulls were replaced by other tanks, rather than being directly replaced with new Matildas. Matildas also saw service with other Commonwealth countries. Australian forces in the Pacific particularly valued the Matilda. Its thick armor was reasonably resistant to surprise Japanese artillery fire that often came at nearly point-blank range. The Australians even added additional armor by attaching spare tank tracks to the front of the hull.

By no means perfect, the Matilda was nonetheless of great value to British forces. The fact that the Afrika Korps pressed Matildas into service was a testament to its abilities.