Why Is the Media Censoring Trump And Showing Chinese Propaganda? 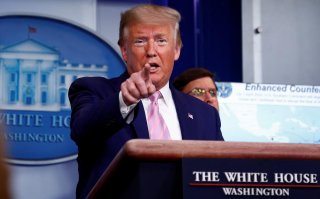 Actress Jane Lynch demanded on Twitter on Monday that President Donald Trump end his daily press briefings and that the media stop covering them.

Lest one think this is just one misguided voice in the dark crevasse that is celebrity Twitter punditry, there’s now a petition by the left-wing activist organization MoveOn.org to get news outlets to stop covering the briefings.

Many in the political punditocracy are hopping aboard this idea.

“I would stop putting those briefings on live TV—not out of spite, but because it’s misinformation,” liberal MSNBC host Rachel Maddow said on her prime-time program.

“Enough is enough. Americans deserve so much better than what this president offers every time he approaches the podium,” wrote Maria Cardona, a Democratic strategist. “He needs to give up the daily press briefings, and let the experts take control so that they can use these press conferences to reassure Americans in our time of distress and not cause more fear when we need it least.”

Perhaps worst of all, some major media outlets actually seem to be taking the ending of press briefing coverage seriously.

“Nowadays, it seems they make little news. We, of course, reserve the right to show them live [via web streaming], if we believe they will actually make news,” Baquet said, according to The Washington Post. “But that hasn’t happened in quite some time.”

That doesn’t seem consistent, however, with his publication’s own reporting.

A March 25 New York Times article suggested that the media stop covering Trump’s press briefings because they are spreading what it calls “misinformation.”

Just as bad, in the Times’ view, the briefings are popular.

The Times piece began with this lead sentence: “President Trump is a ratings hit, and some journalists and public health experts say that could be a dangerous thing.”

Margaret Sullivan, media columnist at The Washington Post, wrote that the press needs to “adjust accordingly” to the press briefings because, in her view, they are more like political rallies and might serve his political ends.

“Trump is doing harm and spreading misinformation while working for his own partisan political benefit—a naked attempt to portray himself as a wartime president, bravely leading the nation through a tumultuous time, the [Franklin Delano Roosevelt] of the 21st century,” Sullivan wrote .

FDR didn’t use fireside chats for his political benefit?

This is basically just saying that the media need to stop covering the White House coronavirus briefings because they might help Trump.

All of this is coming from publications and an industry that formerly fretted over and lambasted the lack of regular White House press briefings before the coronavirus outbreak. Some even called them “ an essential part of democracy. ”

Now that everyone is watching the White House briefings, the media aren’t so keen on the daily ritual allegedly sustaining the republic. What gives?

The New York Times and other outlets that accuse the White House of spreading misinformation seem to have had no problem publishing literal Chinese propaganda .

In the past week, countless outlets , including the very same New York Times , published stories saying that the total number of U.S. coronavirus cases has surpassed China’s, despite the fact that there’s no reason whatsoever to trust the information coming out of an authoritarian communist regime that has repeatedly lied to its own citizens and to the world, sparking the greatest global pandemic in the past century .

Remember, it wasn’t long ago that most major media outlets were publishing stories about how Trump’s move to shut off travel from China was misguided, in part based on recommendations from the World Health Organization.

The problem is, the WHO relied on information provided by China, which turned out to be not only wrong, but likely a product of willful misrepresentation.

It’s good for the media to have a healthy skepticism of those in power. That said, however, one would think that skepticism should be directed most strongly at those in positions of absolute power, as in the case of the Chinese communist government.

Despite this, many in the media still seem more consumed with attacking the Trump administration—even through foreign proxies—than simply getting to the truth.

The bottom line is that neither the reduction, nor the uptick, in White House press conferences signals the end of democracy. Americans are stuck at home en masse, and many more than usual want to hear from the president and the administration in a national crisis.

The administration’s response to the coronavirus pandemic has been far from perfect, but the media have hardly performed without serious and embarrassing fumbles . Cutting off the president now, when so many Americans are tuning in, would be a travesty.

When one reporter asked Trump at Sunday’s coronavirus task force briefing about outlets discontinuing coverage of the daily events, the president gave a reasonable response.

“I think the American public, ultimately, they should be the decider. If they don’t want to watch, they should not watch,” Trump said . “When [the media] don’t want the president of the United States to have a voice, you are not talking about democracy any longer.”

It might be past time, especially amid an international calamity, to hope the media will make a self-correction and restore some of their lost credibility at this time.

Cutting off the president’s microphone hardly restores confidence in a collective institution that seems hopelessly partisan and one-sided.