Why Might the Navy Get Rid of Its Important Minesweepers? 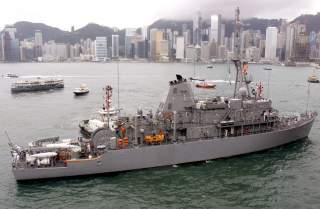 Key point: Washington might want to think twice about getting rid of them.

The U.S. Navy is getting ready to decommission its last few single-mission mine-countermeasures vessels, or MCMs.

A late-March 2019 exercise off the Virginia coast points to a new way of deploying minehunting forces that the Navy hopes will work at as well as the old, purpose-made counter-mine ships have done.

For the Virginia exercise, a British navy Bay-class auxiliary ship embarked U.S. Navy sailors, helicopters, boats and drones as part of a test of the so-called "vessel-of-opportunity" approach to mine warfare.

Under that concept, American mine-hunting forces could deploy from any large U.S. or allied ship. They wouldn't need their own, dedicated minehunting vessels.

As of early 2019, the U.S. Navy operated 11 Avenger-class minehunters that commissioned into service starting in the late 1980s. The 224-feet-long vessels carry sonar, radar and minesweeping gear.

The Navy was never particularly fond of dedicated minehunters, as the lightly-armed vessels lack the flexibility to perform major roles other than sweeping for mines. As part of its 2020 shipbuilding plan, the Navy proposed to begin decommissioning the Avengers.

First to go would be the three Avengers that reside stateside. The other eight vessels operate from Bahrain and Japan.

"The Navy is focused on both future MCM capability and near-term improvement of operational availability of the aging Avenger-class MCMs, with priority on the forward-deployed naval force," the Navy stated.

Part of the minehunting mission would migrate to the growing fleet of Littoral Combat Ships. Congress has funded 35 of the 410-feet-long LCSs. "Of these, four are dedicated test ships, eight are surface-warfare ships, eight are anti-submarine-warfare ships and 15 are mine-countermeasure ships," Navy officials told a House of Representatives subcommittee on March 26, 2019.

The MCM modules aboard the 15 minehunting LCSs are combat-ready, according to the Navy.

The Navy deferred, past its five-year planning window, a fuller range of detection and neutralization capabilities.

Vessels of opportunity could help the Navy to fill the gaps. A large ship could host a more capable set of minehunting gear. In March 2019 off of Virginia, Navy MCM forces embarked on Mounts Bay, a 579-feet-long Royal Fleet Auxiliary amphibious transport ship.

"The exercise didn’t test the effectiveness of the systems to find mines," USNI News reported, "but rather tested whether a single task group could command and control all the people and platforms at once; whether the vehicles could be launched, recovered and operated together without getting in each other’s way; and whether their data could be combined into a single operating picture to allow the task group commander to make decisions about how to clear a minefield.

"With helicopters trying to operate from the flight deck and two units trying to move their unmanned systems and boats around the well deck without slowing each other down or hurting any of the equipment – all while aboard a 'vessel of opportunity' that they hadn’t worked with before – that was no small task."

The experiment apparently was successful, inasmuch as the Americans now are comfortable operating from a British auxiliary.

"I think this gives me flexibility, because I now know that if I were deployed forward and I had a certain mix of these assets, I’m ready to go on a Bay-class ship and have full confidence that we can execute our mission successfully," Cmdr. Jon Haase, the EOD commander, told USNI News. "And the more times we do events like this on different ships, as an operational commander, I would feel more comfortable and confident in having flexibility."

The U.S. and allied navies together operate scores, if not hundreds, of large ships that could accommodate minehunting forces.

David Axe edits War Is Boring. He is the author of the new graphic novels MACHETE SQUAD and THE STAN. This first appeared in June 2019.