Why NATO (Or Anyone) Should Fear Russia's TOR Air Defense System 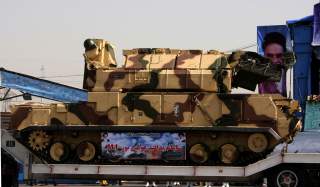 Russian expert Viktor Murakhovsky recently was caught in a controversy when he claimed that the Russian Pantsir-S1 air defense system suffered from major drawbacks and flaws when defending from attacks on the Khmeimim Airbase in Syria.

From these statistics alone, the Tor sounds like it should be taking over for the Pantsir. But what for was the Tor originally intended? What are its capabilities? Why did it massively outperform the Pantsir in Syria?

Precision guided munitions such as the Walleye and air-launched cruise missiles were also upcoming threats at the time. A new system was necessary to counter all of these threats.

The design that would emerge to counter this threat is the Tor missile system, adopted in 1985. Similar to the Osa it replaced, the Tor is completely self-contained. Missiles, tracking radar, and search radar are all integrated into one vehicle.

In order to be more nimble and reactive, the Tor system uses a straight vertical launch, similar to the S-300. Eight missiles are stored in vertical launch canisters.

When a missile is launched, it is ejected vertically from the canister by a gas catapult. The wings of the missile unfold as it leaves.

This allows the Tor to engage a target within 10 seconds while on the move, and within 8 seconds from a short stop.

The Tor integrates a PESA radar, which allows for faster and more precise beam control than the earlier Osa system. However, the original Tor only has one engagement channel, so only one missile can be guided at a time.

This was upgraded in the Tor-M1, which entered service in 1991. This gave the Tor two guidance channels and enhanced its ability to engage a more diverse target set, including laser-guided bombs. It also slightly lowered the reaction time of the Tor, due to the integration of newer, faster computers.

Tor is fielded fairly widely in the Russian Army on a variety of chassis. In addition to the standard tracked chassis, versions exist for arctic conditions, as well as wheeled chassis for export. The entire system has been successfully navalized.

So why did Tor do so much better than the Pantsir? As Tor is meant to be a divisional level system as opposed to point defense like the Pantsir, it has a more powerful radar, which could probably pick up an incoming contact before the Pantsir.

Tor’s missiles are also likely more agile than Pantsir, and the vertical launch is a significant asset when engaging multiple targets coming in from different directions as the launcher doesn’t have to rotate before launching the missile (although it still must rotate to guide it).

Technical reasons aside, the Tor might also have been tasked to destroy easier targets than the Pantsir.

Given the Pantsir’s role as point defense, it might have been tasked to engage super small drones and similar targets outside of Tor’s engagement envelope. Such targets are very hard to hit, which may have skewed the effectiveness rating.