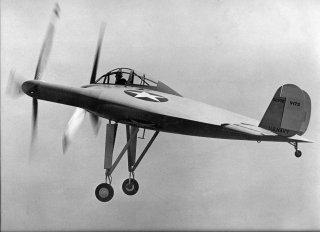 The “Flying Flapjack” or Vought XF5U program was a U.S. Navy experimental aircraft that had some odd design features.

The plane was designed by Charles H. Zimmerman just prior to World War II. Zimmerman had pioneered several unique designs, some of which had promising low-speed capabilities. After showing prototype blueprints to the Navy in the late 1930s, he was approached and asked to further pursue one of his designs—the Flying Flapjack.

His initial prototype, the Vought V-173, was a light-weight, proof-of-concept test model made of wood and canvas that had a disk, or pancake-shaped body. A pair of three-bladed propellers were fixed to the forward edges of the airframe, powered by a pair of small 80 horsepower engines buried inside the fuselage. The pilot sat in a bubble canopy in between the propellers, and inside the leading edge of the plane’s lifting surface.

Two control surfaces were affixed near the rear of the flattened fuselage, which also had twin tail control surfaces at the rear. The plane had two rather tall forward legs with single wheels, and one very small single wheel at the back, giving the plane a distinct upward-facing take-off and landing position.

The prototype was easy to handle—the famed pilot Charles Lindbergh took the V-173 for a test flight and found it easy to fly. Test flights in the early 1940s caused a spike in UFO reports from startled East Coast residents who had seen the odd-looking aircraft. Though the V-173 had decent performance, it suffered from excessive vibration, which significantly slowed down development.

The prototype was good enough however, and both Zimmerman and Vought manufactured an all-metal prototype. The Vought XF5U was both larger and significantly heavier. Instead of modest 80 horsepower engines, the XF5U had a pair of Pratt & Whitney Wasp-series radial engines, which produced around 1,400 horsepower each. The design was intended to combine a high top speed with manageable landing and takeoff speeds.

In addition to the plane’s control surfaces, maneuvering was aided by the propellers, which had a limited ability to point slightly up or slightly down, similarly to how a helicopter’s main rotor provides maneuverability.

The XF5U design was structurally very solid. It handled well and had a higher top speed than many other fighters of the era. In contrast to other high-speed planes, it did not require a long runway for take-offs and landings, as its blended wing-fuselage gave it good low-speed handling.

Unfortunately for Zimmerman and Vought, early jet engine designs had proven their worth during World War II and the immediate aftermath. The United States was transitioning into the jet age, moving away from slower propeller-driven aircraft.

Though the project was canceled in 1947, Zimmerman went on to pioneer several other aircraft designs. After the project cancellation, the V-173 was put into a Dallas, Texas aviation museum, whereas the XF5U was destroyed. It was reportedly so structurally sound, that a wreaking ball was needed to break up the airframe. So much for the Flying Flapjacks.