Why the Navy Is Integrating Mission Packages on Expeditionary Sea Bases 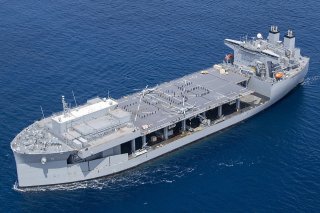 The U.S. Navy is expanding the mission and technical capacity of its growing fleet of Expeditionary Sea Bases (ESBs). The ESB is designed as a mobile maritime base for operations. ESBs can function as floating command and control hubs or motherships for drones. The ability to launch and operate drones from an ESB is enabled in large part by integration with the Navy’s Littoral Combat Ships (LCSs).

“We have already tested the ability to fit, launch, and recover unmanned systems from an ESB,”  Littoral Combat Ship Program Manager Capt. Gus Weekes told an audience at the 2022 Surface Navy Symposium.

There are three mission packages for the LCS: surface warfare, mine countermeasures, and anti-submarine warfare. The continued testing and development of these mission packages aboard the LCS is what led the Navy to integrate them with ESBs.

“There is some additional testing, verification, and validation that needs to happen, but we’ve sorted a path,” Weekes said. “It could be the ESB for our Unmanned Influence Sweep System suite.”

The ESB would benefit from an ability to launch and recover drones searching for mines or conducting surveillance. The mission packages can be integrated easily because they were designed to be “modular,” meaning that they were built with a set of common technical standards and interfaces to accommodate new systems and technologies as they become available.

The Navy has started construction on its fifth ESB, the future USS Robert E. Simanek. The ESB class is being tailored for mobile sea basing to support the Navy’s growing emphasis on the Pacific. The Pacific is filled with dangerous flashpoints such as the South China Sea, the Senkaku Islands near Japan, and Taiwan. Any great power confrontation in the Pacific would rely heavily upon the U.S. Navy’s ability to project and sustain power from the sea. The ESB platform’s design may be evolving in part for this reason.