Why New Submarines Alone Won't Save Taiwan from China 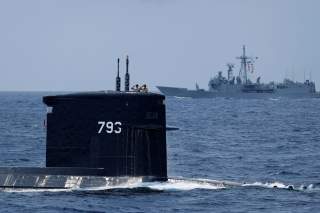 After its long request for additional submarines, Taiwan has somehow progressed towards its goal. On May 9, the groundbreaking ceremony of the shipyard for building submarines in Kaohsiung represented a milestone for Taiwan’s indigenous project. After the fleet is completed, the asymmetrical nature of the submarines vis-à-vis the Chinese major surface naval ships would strengthen Taipei’s deterrence against Beijing. The underwater environment also makes the fleet generally free from air cover. In the face of the advancing firepower of missiles and other projectiles from the People’s Liberation Army (PLA), Taiwan’s air bases could be vulnerable, as the quantitatively superior combat aircraft of the PLA Air Force (PLAAF) and PLA Navy (PLAN) would seriously challenge Taiwan’s air defenses as well.

In case that the PLA really dominated the sky above the island and even sent airborne some units to the island, the eventual shipping massive force across the Strait is still indispensable. In this scenario, a few submarines could significantly disrupt, if not deny, the PLAN amphibious fleet from projecting troops onshore, thus causing considerable uncertainty for Beijing’s gambit. Apart from surface vessels, sub-launched cruise missiles would further amplify the strategic values of the submarines beyond the maritime domain, meaning more costs for China regarding use of force.

Between this terrific picture of deterrence and the reality, shipbuilding is a major obstacle, but the deployment of submarines could also be grave. Due to the lack of public information, such as whether the design is really from scratch or based on a matured model, it would not be realistic to estimate the feasibility of the relatively short schedule; the first boat is planned to be launched in 2024, commissioned in another two years, followed by seven or more vessels.

No matter how soon or how many of those submarines will be commissioned, their movement from their bases to tactical and operational locations is not only critical but also perilous. For most countries with certain strategic depth from their potential enemies, sailing submarines out of home bases would be plainly simple, but Taiwan resides in the PLAN’s operational sphere, and the Chinese may not take such a deployment for granted. If Taipei will not build new submarine bases, the current Zuoying naval base facing the Taiwan Strait could be directly attacked from Chinese ballistic and cruise missiles, as well as other munitions. Furthermore, since the Zuoying base is close to the Kaohsiung Port, a hub of sea lines of communication (SLOCs), numerous merchants passing nearby the base could present a means for the PLAN to take irregular operations. For instance, the covered PLAN personnel could create one or more “accidents” of sinking one or more ships into the underwater routes or use cargo ships as platforms of launching surprise strikes from missiles hidden in containers or other coverages, leaving less time for Zuoying to respond.

To build one or more submarine bases in the East Coast of Taiwan would be better for less exposure and dispersing naval assets, in addition to close access to the deep Pacific Ocean, but such bases would not be trouble-free either. The deep water may also allow the PLAN to deploy one or a few submarines as “gatekeepers” to monitor the bases, and then follow any departing Taiwanese counterparts. According to the planned fleet size, and ratios of submarines in maintenance, training and duty, a maximal number of Taiwan’s submarines ready for operation could be six or seven, and it is not impossible for the PLAN to carry out this gatekeeping tactic. Moreover, Beijing’s espionage may pave ways for several irregular measures of neutralizing Taipei’s submarine capability, such as cyber-attack, sabotage of key facilities, the assassination of key crews or paralyzing the command chain. As a submarine force is intensive regarding technologies and human capital, such internal attacks could be more destructive. Owing to the limited durability of diesel-electric submarines, loss of logistical support could crucially erode Taiwan’s underwater capability regardless of base locations. The various espionage cases exposed in Taiwan also signify the danger and feasibility of such internal threats.

Undeniably, each kind of threat to Taiwan’s submarines corresponds to respective countermeasures. Since the era of U-boats, fortified bases, such as submarine pens covered with heavy concrete, have had their toughness proven under massive bombardment and are still utilized by many submarine operators, including China, to date. To extend restricted zones in the front of the Zuoying and other naval bases would prevent or at least reduce the obstruction of sunk ships and other tactics using civilian vessels as platforms. Tightening internal security measures, such as border control and base defense, would constrain the space for Chinese spies and special forces to operate. Improvement of maritime surveillance and other anti-submarine capabilities would thwart the gatekeeping tactic. In other words, Taipei has a range of works to prepare in parallel with the undergoing shipbuilding.

In addition, despite the relatively independent nature of submarines, they are neither really isolated from other security factors nor a strategic panacea. If Taiwan does not comprehensively beef up its general conditions for defense, submarines alone would not make a major change to the island’s difficult security circumstance.

Shang-Su Wu is a research fellow in the Institute of Defense and Strategic Studies at the S. Rajaratnam School of International Studies.