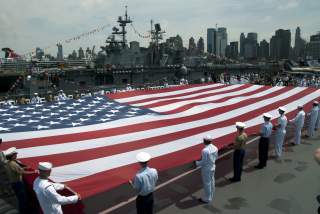 Mr. President, the time is now to take action to prevent a space Pearl Harbor.

Since China successfully tested its ground-based direct-ascent antisatellite (ASAT) ballistic missile in 2007, the United States and its allies have been mesmerized by this highly-visible event and have neglected China’s development and demonstration of rendezvous proximation operations in space. We are now unprepared for the threat of a space Pearl Harbor, which will be upon us by the early 2020s.

For two opportune reasons, there is still time for the DoD to counter this devastating threat, if it starts at full throttle immediately. First, an effective defense can be developed in just a few years using a combination of self-defense zones and bodyguard spacecraft (hereafter, SZBS). However, DoD needs to start on SZBS now because some critical steps to implement it are time-consuming and sequential. It has to deliberate on the threat and alternative responses, acquire the bodyguard spacecraft, and make the SZBS concept operational. Another benefit of starting now: although SZBS appears to be the best alternative so far, in contemplating it, DoD may discover an even better option.

Second, less than two months after President Trump’s space force directive, DoD is already outlining immediate steps “using existing facilities” to establish a Space Development Agency, Space Operations Force and Space Command, albeit short of establishing a sixth branch of the Armed Forces, which requires Congressional action. DoD has demonstrated that it can accomplish so much so quickly on the complicated space force reorganization, so it can surely implement SZBS in time to meet the threat, if it puts its mind to it even at this eleventh hour.

It is alarming that China’s supposedly peaceful robotic servicing spacecraft will be deployed by the early 2020s. Russia will soon follow suit. These spacecraft can be readily re-tasked in space to threaten and disable near-simultaneously multiples of our critical satellites.

However, to give the viability of self-defense zones and bodyguard spacecraft a fair hearing, we must dispel two misunderstandings about the SZBS concept. First, the call for SZBS is sometimes considered as “a loud voice of dissent” about these supposedly-peaceful robotic servicing spacecraft and construed as focusing “on the overblown ‘weapon’ aspect of satellite servicing more than the potential commercial benefits.” Yet, the growing concerns about the “weapon” aspect of robotic spacecraft (i.e. satellites) have found powerful company at the least since 2015. As for the latest, on June 26, Lt. Gen. Robert Ashley, the head of the Defense Intelligence Agency, said that U.S. lead in space is diminishing and tomorrow’s skies will be filled with enemy robot satellites from Russia and China. On August 14, Yleem Poblete, the State Department’s assistant secretary of state for arms control, verification and compliance told an audience in Geneva, Switzerland: A Russian satellite made a series of maneuvers in October 2017 that was “inconsistent” with its expected behavior and marks “a very troubling development.” Actually, the idea that the “weapon” aspect is overblown is itself overblown. The media coverage of the “commercial” aspect versus the “weapon” aspect is about 100 to 1. The ratio is similar if one compares the numbers of personnel working on or studying these two aspects. So is the ratio of money invested in taking advantage of the “commercial” aspect versus dealing with the “weapon” aspect. Therefore, in reality, we have greatly overemphasized the benefits of the “commercial” aspect when compared to how we have minimized the danger of the “weapon” aspect.

Second, recommending SZBS is not “arguing against the servicing satellites.” Just the opposite is true, as we encourage the U.S., China, Russia and other countries to deploy, not to ban, these highly-useful spacecraft. What better way to welcome their use is than keep them working in a beneficial safe space away from potential adversaries’ satellites to avoid international incidents.

What DARPA and President Trump have done so far have laid the foundation for the SZBS to be implemented in time. DARPA has scheduled the first launch of its robotic servicing spacecraft in March 2021. DoD should plan to buy more of these soon-to-be-developed spacecraft and use some as bodyguard spacecraft. On March 23, President Trump unveiled a potentially game-changing self-defense doctrine to “counter threats,” which can be interpreted as the right to exercise self-defense against imminent space threats even before the attacks have actually occurred. Self-defense zones can be considered as a part of this new Trump doctrine.

Further, the implementation of SZBS would fit Secretary of Defense Mattis’ position of “making us strategically predictable for our allies,” which is the first of four pillars in the National Defense Strategy released in January. Of all actions that need to be strategically predictable, none is more important than being able to rely on U.S. assistance when called upon. Yet, this threat from robotic servicing spacecraft could cause the U.S. not to intervene: “Faced with the prospect of waging air, land and naval warfare without the support of America’s key satellites, America’s military would be wary of waging any military campaigns at all.” By implementing the SZBS, we are solidifying our commitment to our allies by creating strategic predictability.

With little dissent, the whole world has already recognized that there is not enough time to arrive at a legally-binding space arms control treaty by the early 2020s. Instead, current arms control efforts consist of establishing voluntary transparency and confidence-building measures and guidelines for the long-term sustainability of outer space activities. While there are some attempts to insert rules of the road pertaining to rendezvous proximity operations, most of the rules are still unresolved and under discussion. On the one hand, these endeavors are highly useful during peacetime. On the other hand, for the 2020s at the least, the security of our space national security assets during crisis and conflict cannot solely rest upon voluntary measures and rules even after they have reached consensus. That is to say, our space security is too critical to simply count on the absence of malevolent intent and action from our powerful adversaries, especially when their national interests, sometimes in opposition to ours, are at stake.

Short of passive defenses, which are inadequate for this threat in the near future, the use of robotic servicing spacecraft as bodyguards is the most non-escalatory measure that can be taken in a conflict, because such defense is a proportional response to the threat and attack, yet does not incite a space arms race.

We have purposely recommended SZBS as unilateral measures to be taken in the near term, because their deployment does not rely on the consent of China and Russia, whose self-interest would prefer us to stay naked against their threats, as opposed to implement any defense. On the other hand, once the U.S. is committed to these unilateral and effective measures to protect our satellites, China, Russia and other countries would be far more willing to join a similar agreement in the bi-, tri-, or multilateral form. Once their threats become ineffective, they might join the agreement as well to avoid misunderstandings and inadvertent wars.

As soon as possible, whether as a prerequisite to, or the most urgent action of, reorganizing for a Space Force, the DoD should establish a task force to lead deliberations on countering the space Pearl Harbor threat in the 2020s, including both defense and deterrence measures. These discussions should not be expanded to cover all space threats, but purposefully remain targeted on this most urgent threat, because an all-encompassing approach will dilute the focus. Also, Congress should hold hearings to evaluate and provide oversight of these DoD activities and to educate the public to gain political support for these critical actions.

Dr. Brian G. Chow is an independent policy analyst. His recent publications in space appear in Strategic Studies Quarterly, SpaceNews, the National Interest, Defense One, Defense News and The Space Review. You can reach him on Twitter at @briangchow.