Why No One Can Beat America's Special Operations Forces in Battle 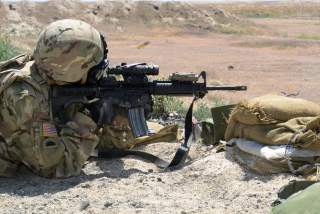 U.S. special operations forces, including units from the Army, Navy, Marines and Air Force, have led the charge in America’s post–9/11 wars. Highly trained and lavishly equipped, they often receive equipment before the conventional forces that often support them. Often, a look at the small arms of special forces is a look at the future of military small-arms technology.

One of the main weapons used by SOF is the M4 carbine, or some variation thereof. U.S. Army Rangers and Special Forces carry the M4 carbine, by now likely upgraded to the M4A1 standard. The -A1 standard includes ambidextrous controls, an improved trigger group and the ability to fire fully automatic. U.S. Navy SEALS often carry the M4 but are increasingly armed with Mk. 18 Mod. 0/1. Mk.18 weapons that feature shorter, 10.5-inch barrels and are optimized towards close quarters combat. The Mk. 18 is also suppressor ready.

Another weapon used by US special warfare units is the Heckler and Koch 416 assault rifle. Externally similar to the M4A1 carbine, the HK416 differs in being a gas piston, rather than direct impingement, weapon system. The HK416 uses gunpowder gases to drive a bolt to cycle the weapon, rather than using the gases directly. The result is a weapon that, although slightly more front-heavy, requires less cleaning in the field and is less prone to overheating. The HK416 was originally fielded by the U.S. Army’s Assymmetric Warfare Group and now reportedly is used by US Navy SEALs and Delta Force. A version with a sixteen-inch barrel is being fielded by the U.S. Marine Corps as the M27 Infantry Automatic Rifle and will eventually equip all frontline Marine Corps infantry.

Still another assault rifle used by special forces is the FN Small Caliber Automatic Rifle, or SCAR. The weapon was first adopted in 2005 as the Special Operations Forces Combat Assault Rifle (SCAR).  Available in a lighter 5.56-millimeter and heavier 7.62-millimeter versions, SCAR was adopted by Army Rangers and Air Force special tactics troopers in 2009, although US Special Operations Command later pulled the weapon from service “due to a lack of funding and marginal performance improvement over the M4”. Although the 5.56 SCAR variant was removed from service the heavier 7.62 version was retained and could still see action.

Special forces units also favor compact weapons for suppressive fire, and here the M249 Squad Automatic Weapon platform and derivatives dominate. The M249, adopted by the U.S. Army and Marines Corps in the mid-1980s, has a high rate of fire and is chambered in the same 5.56-millimeter cartridge used by the M16 and M4 carbine. Unlike assault rifles, the M249 feeds from ammunition belts to facilitate sustained firing.

The M249 is also used by special forces, albeit with considerable improvements. The M249 Special Purpose Weapon, or SPW, featured a shorter barrel and a collapsible stock. The SPW variant did not have a bipod, carrying handle, or vehicle mounting lug but did have a forward pistol grip mounted underneath the barrel. The variant also included a three position Picatinny rail for adding optics and aiming devices. A follow-on variant, the Mk. 46, included a fixed stock, an even shorter barrel, and a four position rail system.

The largest light caliber weapon in use by American special forces is the M240 medium machine gun. The M240B is based on the time-tested FN MAG machine gun and was the inspiration for the design of the M249. A gas-operated, belt fed machine gun with a 24-inch barrel, the M240B is dependable and puts out a large volume of fire. The basic design, chambered to fire 7.62-millimeter ammunition was heavy at 27 pounds. A new version, the M240L, sheds five pounds via the use of titanium and polymers and shortening the barrel. A version made for special forces, the Mk. 48, is very similar in size, for, and function to the Mk. 46, the main difference being the use of the more powerful 7.62 round.

U.S. special operation forces not only see more combat than conventional, line infantry but are able to work lessons learned from combat experiences into their equipment sooner and to greater effect. While it’s exciting to watch the world of special forces and their tricked out gear, it’s also a glance into the crystal ball at the future of all ground troops. Improvements in special forces weapons trickle down to conventional forces, spreading out among the various armed services, and all American ground forces invariably benefit.