Why North Korea Is Raising Tensions with New Missile Tests 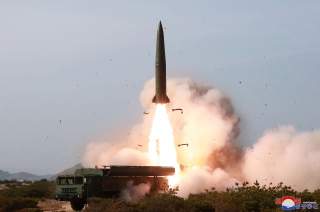 After a hiatus of 521 days, North Korea has resumed its missile-testing regime. On May 9, the country launched its second flight test in less than a week of what appear to be short-range missiles. Its May 4 launch involved multiple missiles, possibly including several of the same type.

The second test came on the second anniversary of South Korean President Moon Jae In's inauguration and just before a live TV interview in which Moon characterized the tests as a "pressure action" to shape further talks. He renewed his call for a fourth inter-Korean summit and emphasized planned shipments of South Korean food aid to the North. The May 9 test also coincided with the first visit to Seoul by U.S. Special Representative Stephen Biegun since the February breakdown of the Hanoi summit between U.S. President Donald Trump and North Korean leader Kim Jong Un. North Korea's Ministry of Foreign Affairs called the tests routine and defensive in nature, while state-run media criticized the recent test of the U.S.-South Korea Terminal High Altitude Area Defense system.

North Korean missile tests always carry a message. The message this time is that it should not be ignored and that the current state of affairs is unacceptable. Since the Hanoi breakdown, the U.S.-North Korea outreach has remained static, with Washington holding firm to demands for complete denuclearization before it would entertain sanctions relief, a non-starter for Pyongyang. And as the North perceives White House focus to be consumed with Iran and Venezuela, it does not want to be put on the back burner.

As Kim works to manage his country's intensifying economic and food crises while keeping an eye on potentially restive internal factions, he has a growing incentive to make tangible progress with the United States. While he sees a window of opportunity in Trump's unique approach to the issue, the closer the United States gets to its 2020 presidential election, the greater the risk that window will narrow. It follows that part of the calculation for renewing missile testing now is to move North Korea back up the White House's list of priorities. But that doesn't mean that the North would return to its program of testing medium- and intercontinental-range missiles and risk drawing U.S. anger.

So far, the U.S. response to the short-range tests has been subdued, with Trump merely emphasizing that dialogue is still open and a deal is still possible. The tests have greater resonance for South Korea and Japan, given that their population centers sit within range of these missiles. With this, North Korea is dialing up pressure on these U.S. allies to push Washington for greater flexibility.

It has been over two months since the second Trump-Kim summit in Hanoi collapsed over mismatched expectations over sanctions relief and dismantling of weapons sites. Since then, the North has signaled its displeasure with the U.S. stance by hinting at a return to weapons testing, reaching out to Russia and cutting off lower-level dialogue.

North Korea: With a Return to Missile Testing, a Knock on the White House's Door is republished with the permission of Stratfor Worldview, a geopolitical intelligence and advisory firm.