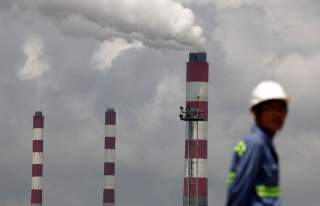 Concentrations of carbon dioxide in the atmosphere are higher than at any time in human history, and nine of the warmest years have occurred since 2005.

Even with the progress made in introducing alternatives to fossil fuels, gaining energy efficiencies and proposed carbon regulations around the world, avoiding catastrophic impacts on our coastal infrastructure, biodiversity, food, energy and water resources will require more. In particular, many climate researchers like myself believe government needs to advance technology that will actually suck carbon dioxide out of the air and put it away for very long periods.

There are several so-called negative emissions technologies that could remove carbon dioxide from the air, including those aimed at removing CO2 by enhancing natural forest and wetland uptake, using bio-energy in power production and scrubbing CO2 efficiently from air.

As diplomats and policymakers gather to discuss global agreements to reduce greenhouse gas, many believe that negative emissions technologies need to be part of the discussion for how nations will address climate change. But much as there is not a single solution to reducing emissions, no one technology will alone be sufficient to avert the worst effects of climate change.

In a 2018 consensus study, the U.S. National Academies of Sciences concluded that negative emission technologies will be needed to reduce difficult-to-reduce emissions even if most emissions from burning fossil fuels, agricultural land use and cement production – the top sources of man-made greenhouse gases – could be eliminated. The study noted that direct emission reductions in some sectors, such as air travel, will be always remain more difficult to achieve and will require methods to remove CO2 from the air and store it away.

The scale of the problem is daunting. In the U.S. alone, which emits about a sixth of current global CO2, and with global energy needs steadily increasing, emissions to the atmosphere are expected to outpace uptake and the volume of waste gas will only grow. In its latest emissions gap report, the United Nations warned greenhouse gases will continue to rise despite most countries committing to reduce them, calling the forecast for reversing the course “bleak.”

Where should CO2 be safely put away? The most convenient sites appear to be near industrial sources, such as power plants, but they can come with a tangle of issues surrounding underground property rights, overland access, and long-term risks and liabilities near populated areas.

My research has suggested that offshore storage sites around the globe may offer several unique and important advantages. In particular, CO2 injected into cooled volcanic rocks under the ocean will react chemically with them to form solid minerals like calcium carbonate – limestone – mimicking the natural process of rock weathering.

Although this technique has not been demonstrated in large-scale experiments, my research suggests that sub-sea rocks have the potential to provide vast capacity for hundreds of years of emissions, physical safeguards that will protect the oceans and humans, and can be located at safe distances from potential interference with ongoing human activities.

But that alone is not enough. Considering the various negative emission technologies reviewed by the U.S. National Academies of Sciences, it seems clear to me that all possibilities for carbon capture and storage need to be pursued in parallel. That’s because no one location, no singular technology and no country in isolation will be sufficient to solve this huge problem by itself. Different industrial, economic, legal and environmental conditions around the globe will require different solutions, and ultimately, these must all work together. In my view, pursuing a wide range of solutions does not create a competition between eliminating emissions and directly decreasing the CO2 concentration in the atmosphere.

Some researchers have voiced the concern that adoption of these technologies will discourage efforts to lower emissions. But some of these technologies, such as removing CO2 directly from the air, are currently expensive and efficiencies are still improving. So, with regulations to limit carbon emissions, polluters would face the costs of directly reducing emissions or the financial consequences of continuing to emit while relying on negative emissions technologies – both solutions would reduce CO2 waste collecting in the air.

Any concerns over costs, though, should be compared to cost of doing nothing. It is estimated that allowing emissions to continue apace may reduce GDP in some areas by as much as 1% per year, reflecting potential losses in productivity due to the effects of warming on regional resources, jobs and public health.

Both social and economic incentives will likely be needed to implement these technologies at the scale required to address climate warming, similar to past subsidies and research investments in alternative energy technologies that are now widespread.

To make negative emission technologies viable, industry needs physical and measurable proof of those which will be most effective and then the means to implement them at full scale. That means large government and private investments in research and development for these technologies.