Why The Pentagon Is Testing New Medium-Range Ballistic Missiles 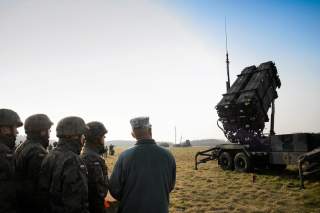 The missile launch, according to a Pentagon statement, took place earlier this month at Vandenberg Air Force Base, Calif.

“The test missile exited its static launch stand and terminated in the open ocean after more than 500 kilometers of flight. Data collected and lessons learned from this test will inform the Department of Defense's development of future intermediate-range capabilities,” a DoD statement said.

A missile launch at this range is significant in a number of key respects. First, as specified by the Pentagon statement, the missile firing represents a deliberate effort to bolster U.S. intermediate-range attack weapons, a rapid development that has been underway following the collapse of the U.S.-Russian INF Treaty.

The INF Treaty, previously violated by Russia according to U.S. reports, collapsed earlier this year, prompting the U.S. to develop a new sphere of medium-range weapons; the treaty previously restricted medium-range conventional weapons as a way to better reassure both Russia and NATO that attacks on the European continent would not be likely, or even possible in some respects. A medium-range 500-to-600km cruise missile does allow Russia to hold a large number of major European cities at risk of a conventional missile attack. In like fashion, these missiles can hold key Russian targets at risk from Europe.

Northrop Grumman, a key industry participant in the prototype testing, released a statement saying their involvement in the process is intended to help the Pentagon fast-track its development on these weapons. The test demonstrated “Northrop Grumman’s capability for rapid development and launch in support of urgent requests from the Department of Defense,” the company statement said.

This most recent tests follows a related test-firing in Aug. of this year wherein the Pentagon shot-off a land-fired variant of the well-known Tomahawk missile. This test firing, which involved an adaptation of the maritime-centric Tomahawk weapon, also fired at intermediate ranges of approximately 500km.

An ability to fire 500km land-fired cruise missiles brings a number of substantial implications, the first and foremost of which is introducing a counter weapon, or deterrent, to Russia’s well-documented testing of medium-range land-fired missiles in violation of the INF treaty. The August test marked the first time the U.S. fired a weapon of this range since stepping back from the INF treaty.

Both of these weapons could open up offensive attack nuances, for instance, should there be a need to attack Russian force concentrations massing in or near Eastern Europe. In this scenario, a land-based cruise missile would offer advantageous strike possibilities. These weapons could also enable attacking forces to hit enemy targets from safer stand-off distances.

Osborn previously served at the Pentagon as a Highly Qualified Expert with the Office of the Assistant Secretary of the Army - Acquisition, Logistics& Technology. Osborn has also worked as an anchor and on-air military specialist at national TV networks. He has appeared as a guest military expert on Fox News, MSNBC, The Military Channel and The History Channel. He also has a Masters Degree in Comparative Literature from Columbia University. This first appeared last year.