Why People Love Star Wars So Much 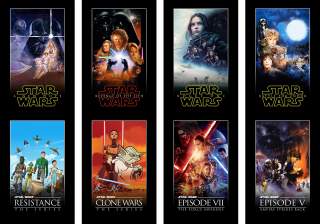 After witnessing the overwhelming popularity of Star Wars, director Francis Ford Coppola told George Lucas he should start his own religion.

Lucas laughed him off, but Coppola may have been onto something.

Indeed, the Star Wars saga taps into the very storytelling devices that have structured myths and religious tales for centuries. And with every new film, fans are able to reinforce their unique communities in a world that has grown, in many ways, increasingly isolated.

Lucas freely admits he based his Star Wars epic on the “hero’s quest” that mythologist Joseph Campbell, in his 1949 book Hero with a Thousand Faces, argued underscores many myths and religious tales.

According to Campbell, hero quests have similar trajectories: the hero leaves his ordinary world and ventures to a place of supernatural wonders. He faces a series of trials to prove his mettle, survives a supreme ordeal, is granted some sort of boon or treasure and returns home to share his knowledge or treasure with those he left behind.

Following this formula, Lucas substituted his own characters for the heroes, villains, and saviors of earlier hero quests.

I became fascinated with how culture is transmitted through fairy tales and myth. Fairy tales are about how people learn about good and evil…it’s the most intimate struggle that we cope with – trying to do the right thing and what’s expected of us by society, by our peers, and in our hearts.

These stories typically appear during times of doubt and can help viewers reclaim the goodness and innocence in themselves, reminding them they can overcome the evil they see in the world. When Lucas set out to create Star Wars – against the backdrop of Vietnam, Watergate and the assassinations of the Kennedy brothers and Martin Luther King, Jr – he had his work cut out for him.

Lucas acknowledges he wrote Star Wars because he believed our society was in dire need of fairy tales, myth and fantasy – a “new myth” would provide a “New Hope” for an audience that had grown cynical and demoralized.

Today’s anxieties are just as acute. Exhausted by the wars in the Middle East, faced with global terrorism and beset with economic woes, the American people yearn for a mythic narrative that will reaffirm their view of the world, with a traditional American hero who will triumph over evil and ensure “everything will turn out okay.”

Looking into the mirror

Lucas is sometimes accused of promoting escapism. But he’s actually tapping into some key facets of the human condition. After all, it’s in the telling of mythic or religious stories that we attempt to answer fundamental questions like “Who am I?” and, ultimately, “What does it all mean?”

It’s no wonder, then, that in an increasingly secularized society, many find themselves gazing away from the pulpit, instead finding meaning in the stories playing out on screens in living rooms and movie theaters across the country.

Film is sometimes described as a “dream screen” – a mirror, when held in front of an audience, reflects both the personal and collective subconscious of our culture. It’s a place where all our hopes, fears and desires find expression.

Considering Star Wars’ mythic foundation, it’s not surprising that it packs such a powerful, emotional punch, stirring the hearts of passionate fans yearning to see the next chapter of the Star Wars universe.

Myths are about creating meaning, reinforcing connections between the I and Thou, and mending the rift between the sacred and profane. They give us heroes we can identify with, who allow us to eventually realize that divinity is not outside the self, but within. In the beginning, Luke might be the character you wanted to pretend to be. With time “playing Luke” helps you become the person you always wanted to be.

If all roads of the hero’s journey lead inward, then film, as a shared cultural artifact, begs us to take the first step.

Unlike a simple, standalone artifact (such as a piece of pottery), film is a shared experience. For the audience, the story, its characters and unique props (like the lightsaber) become stored in an emotional and psychological cache. Filed into memory, they become part of the viewer’s personal history and identity.

Rather than Star Wars existing as something outside of viewers, it takes root within. Many were exposed to the Star Wars films as children. Some acted out scenes at home and at school, investing time and creative energy into a fictional universe and characters who became like an extended family. For them, their “best birthday ever” became indistinguishable from the experience of playing with friends, the cutting of the cake – and their new Star Wars action figures.

In this way, Star Wars no longer remains just a film; it becomes much more.

Even subtle challenges to a narrative we’ve created about the world and ourselves can be stressful. In response, we’re prone to cling even more tightly to our beliefs.

For this reason, minor changes in the Star Wars narrative can unnerve fans. Denying that Han Solo shot first is like finding out you’re adopted; it’s akin to changing your fundamental understanding of the truth.

Forging connections to the past

Star Wars has further transcended the screen in the form of t-shirts, action figures, theme parks, and in cosplay and fan fiction.

As powerful as any holy relic (which, among believers, can provide affirmation and emotional support), buying and collecting Star Wars merchandise can trigger memories of the past. Accessing positive memories and tapping into nostalgia have been shown to be a critical component of forming a meaningful personal narrative, and the simple act of picking up a toy light saber can return fans to childhood, to a time when they felt happy and secure.

Even if someone didn’t have the rosiest childhood, he or she can still escape to the Star Wars universe, creating an alternate reality where cherished friends, caring mentors and happily-ever-afters await.

Situated in an advertising and media landscape that often overpromises and underdelivers (“Buy this and you will be happy”), the world of Star Wars helps fans create meaning when they might otherwise be unfulfilled.

Watching a Star Wars film or buying Star Wars memorabilia doesn’t only remind us of the “good old days.” It serves a more meaningful purpose: it builds community in a world that has grown increasingly isolated, that has traded the physical for the virtual.

If the decline of social capital in public life (which includes religion) is partially responsible for this phenomenon, the rise of technology is equally at fault.

Even when surrounded by people, our attention is diverted – we are distracted, disembodied, absent – existing everywhere but in the present. The connections made through social media are often frayed, and can even lead to heightened feelings of isolation or loneliness.

On the other hand, Star Wars, via play – whether it’s cosplay or swinging a light saber with a friend – demands social interaction, communication and engagement. (Some theorists have even argued that play served as the seed from which all human culture, including religion, evolved.)

Waiting in line for days to buy tickets, wearing your favorite Star Wars t-shirt to school and dressing up as your favorite character at a convention are all social touchstones – icebreakers that facilitate a sense of community and belonging.

It is in this shared storytelling space where history lives and meaning dwells. As cultural critic Lewis Hyde writes, meaningful stories can induce a “moment of grace, a communion, a period during which we too know the hidden coherence of our being and feel the fullness of our lives.”

Once upon a time, we gathered around fires to tell stories. Today we assemble in movie theaters to watch with wonder and awe the flicker of our stories on the screen.

Star Wars is, of course, different from religion in a number of ways. But it still allows us to transcend the everyday and enter a sacred realm – a place where we can glimpse the Holy Land of our better selves and become the heroes we want to be.