Why Play Fighting Prepares Animals for Later in Life 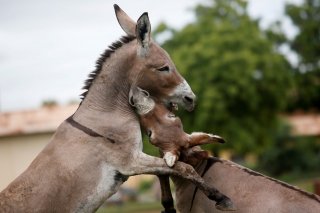 As we endure the current COVID-19 crisis with its important measures of social isolation and distancing, those of us in the northern hemisphere can perhaps take some solace in seeing the arrival of spring.

As a biologist, I find one of the highlights of the year is seeing and hearing the natural world come alive again, with animals getting up close and personal for both breeding and aggressively defending territories. No social distancing for them.

Particularly captivating is the behaviour of newborn animals, a key aspect being their play behaviour. However, much remains unknown about the role of play in animals, and the reason it evolved has long been debated by people who study animal behaviour.

For example, it has been suggested that play fighting in early life prepares animals for later life aggression. This seems inherently intuitive but, while juvenile play fighting is often structurally compared to adult aggression, this link remains to be fully tested by scientists.

Recent research by my colleagues and me shows that play fighting when young can prepare animals for contests when they are older, suggesting play should be considered an important part of animal welfare. But we also found that wasn’t always the case.

As someone who studies aggression and contest behaviour, I was keen to study this issue. Luckily for me, as part of a wider animal welfare project in pigs, we had the opportunity to explore it in detail, as newborn piglets engage in lots of play behaviour.

Our research provides evidence of an association between the amount that piglets play fight and their success in contests in later life, depending on the animal’s sex. We found females tended to play fight less as piglets overall, but the female winners of adult contests had engaged in more play fighting in early life than losers. But in males it was the other way around, which contrasted with our initial predictions.

We think this may be related to sex differences in the pigs’ social behaviour as adults. Under free-ranging conditions, female wild boar live in groups with a hierarchy enforced using aggression that is structurally similar to early life play fighting.

In contrast, male wild boar are more solitary and will engage in escalated contests with other males for access to breeding females. These contests can be very damaging, involving the use of their sharp tusks. So there is a difference between male play fighting and the aggressive behaviours performed in later life.

However, given that social play hasn’t disappeared in male pigs as they have evolved, and the fact that overall it occurs at higher levels than in females, this indicates that males gain important alternative benefits from the performance of this behaviour. These include muscle development, coordination and cognition, as well as gaining experience in responding to unexpected situations.

Put together, these results highlight the potential impact of juvenile play on adult social behaviour and suggest more focus should be given to early life predictors of aggression, a concept which is also important in human research.

Research in other animal species has been contradictory, with a study in meerkats finding that play fighting experience did not affect subsequent fighting success. But our pig findings still have wider application across the animal kingdom, given the importance of social play in diverse species. And our results support the prediction that social play has evolved for the development of social competence in later life, although much remains to be explored on this aspect.

These findings also have important implications for animal welfare. For example, current welfare policy highlights the importance of not just avoiding situations that have a negative effect on animals but also of providing them with positive experiences and a life worth living.

Play is likely to at least partly fulfil these criteria as it tends to be seen when animals’ other needs are met, and is likely to be experienced as a positive emotion. So developing animal management environments and practices that promote play for farm and other captive species is important for their welfare.

With the advent of a pandemic virus thought to have originated from a wild animal kept for live trade, we are seeing more than ever why animal welfare matters. Indeed, animal scientists have coined the term “one welfare” to refer to the idea that human, animal and environmental welfare are all integrated. And during the current lockdown, I think we can all appreciate the importance of play.