Why Russia And Turkey Spat Over Turkey Isn't America's Problem 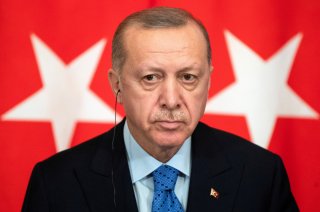 Zbigniew Brzezinski habitually lamented the failure of American policymakers to study maps of the world, to appreciate the historic impact of wars, economics, history, religion, language, culture, and climate. For Brzezinski, strategy—the art and science of employing Washington’s political, economic, psychological, and military power—was not real without a map.

Turkish President Recep Tayyip Erdogan agrees. When Erdogan views the map of the Middle East, Erdogan sees Syria and most of Iraq as historic Turkish territory taken from the Turks when the Ottoman Empire collapsed at the end of WWI. It is no accident that Turks wear T-shirts with Erdogan’s picture and the slogan “The Sultan of the World.”

However, Erdogan’s recent determination to rescue the criminal remnants of the Islamic State or “Daesh” (ISIS), from destruction at the hands of Russian and Syrian Forces in Idlib, Syria brought him into direct confrontation with another man who appreciates the importance of maps: Vladimir Putin. The Russian border lies barely 500 miles from Syria and Russian Forces remain engaged in suppressing Sunni Islamist insurgents in the Caucasus.

Acutely sensitive to the potential threat that President Erdogan’s mix of Ottoman Nationalism and Sunni Islamism presents, Vladimir Putin has also committed Russia to defend Christians across the Middle East and he maintains good relations with Israel. Thanks to President Putin, Sunni and Iranian-backed Shiite Islamist forces have been unable to establish bases in Syria from which they can attack Israel.

An early benefactor of ISIS, President Erdogan has already re-purposed many of the Sunni Islamist terrorists Turkish forces rescued from Idlib for Turkish-led operations in Libya. Erdogan remains committed to his goal of replacing General Sisi’s government with an Islamist State controlled by the Muslim Brotherhood.

To Erdogan’s chagrin, the Russians are fighting in Libya alongside General Haftar’s army. Together with Haftar, the Russians are all that currently prevents Erdogan from creating a Sunni Islamist State that borders Israel on the West.

Meanwhile, on Planet Washington, President Trump’s Secretary of State plotted with his trusted agent and incurable “Never Trumper”, Ambassador Jeffrey, the U.S. Special Representative for Syria Engagement, to cultivate war between Russia and Turkey. Guided by an ostensibly incurable hatred of Russia, Trump’s Department of State promised Erdogan ammunition and intelligence in the hope that Erdogan would commit the Turkish Armed Forces to drive Russia out of Syria. But why would a U.S. Secretary of State deliberately run the risk of turning a localized conflict into a regional war, a war that would certainly engulf most of the States in the Eastern Mediterranean? To date, President Trump has scrupulously avoided unnecessary conflict in the Middle East, Northeast Asia and the Caribbean Basin.

Like Erdogan, Pompeo knows Russia’s position in Syria is weak. Russia has no substantial ground force in Syria and Erdogan can easily block any Russian attempt to reinforce its small contingent in Syria through the Dardanelles. Putin’s military adventure in Syria is also unpopular with the Russian people and a needless drain on Russia’s dwindling treasury.

Erdogan’s economic position is hardly robust, but Turkey enjoys enormous foreign direct investment (perhaps as much as $50 billion over the last five years) from the Peninsular Arab States that enables Erdogan to champion the Sunni Islamist cause. If Pompeo can exploit the bipartisan Russian paranoia that threatened the Trump Presidency, perhaps Pompeo can exploit the bipartisan hostility to Russia, back Turkey in its war and, eventually, launch his own run for the White House?

Perhaps these are the reasons why the Secretary of State pushed Erdogan to call Putin’s bluff. Time will reveal the truth, but today, it would be the gargantuan joke of the 21st Century if President Trump were to allow Secretary of State Pompeo to align American military power with Erdogan’s Sunni-led Islamist cause; the same cause that attacked New York City and killed thousands of Americans.

Erdogan is obsessed with power and driven to overturn the regional order in favor of Sunni Islamism, an ideology totalitarian in action, and cloaked in religion. President Trump should instruct his Secretary of State to tell President Erdogan that if he confronts Russia and Syria on the battlefield, Erdogan does so without any American or Western assistance. As Israeli officers with many years’ experience in the region advise, “When your enemies are killing each other, don’t interrupt.”

Col (ret) Douglas Macgregor, US Army, is a decorated combat veteran, a PhD and the author of five books. His latest is Margin of Victory (Naval Institute Press, 2016). This article first appeared last month.