Why Russia Can’t Convince Belarus to Fight in Ukraine 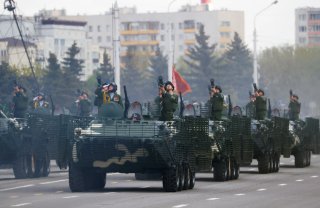 Russia’s war in Ukraine has been catastrophic. Over the past four months, tens of thousands of Ukrainians have been killed. Millions of Ukrainian citizens are now displaced, and many have fled the country. Ukrainian cities and villages have been ravaged by Russia’s unprovoked invasion, and the war continues without an end.

The invasion has not gone according to Russia’s plan. Thousands of Russian soldiers have died, expensive Russian military hardware has been destroyed, and the morale within the Russian military has declined. Due to these setbacks, Russian president Vladimir Putin has started to explore other options. For example, Russia has recruited Chechen and Syrian volunteers to fight in Ukraine.

Russia has also attempted to lure Belarus into its unjust war. For months, Putin has been pressuring Belarusian president Alexander Lukashenko to send troops to Ukraine. While Lukashenko has allowed Putin to use Belarus as a “staging area for Russian troops” and as a location to launch airstrikes from Belarus into Ukraine, the Belarusian leader has stopped just short of sending his troops to join the war.

If Belarus invades, it could disrupt Ukraine’s counteroffensive, as Ukrainian forces would have to fight against two foreign militaries. The Belarusians could be used as a distraction as Russia continues its war in southern and eastern Ukraine. As Ukrainians push the Russians out of their country, the Belarusians would look to halt the flow of Western aid from Poland into Ukraine. Belarusian troops would likely move toward the Polish-Ukrainian border to disrupt the corridor, forcing Ukrainian soldiers to halt the counteroffensive in the east and possibly allowing the Russians to launch a new assault.

In other words, Belarus’s involvement could significantly impact the conflict. Ukrainian officials have also warned that Belarus “may enter the war.” But how likely is this to occur?

While Lukashenko appears to be one of Putin’s last allies, the Belarusian leader has been reluctant to enter the war. Many Belarusian servicemembers oppose the Russian invasion of Ukraine; several officers have resigned from the military, and many others have fled the country. Numerous Belarusian soldiers have also refused to join the fight. This has prompted units to return to their bases, thus abandoning their positions near the Belarusian-Ukrainian border. Some former Belarusian soldiers have even joined the Ukrainian defense force as volunteers. These Belarusian battalions helped defend Kyiv during the initial Russian onslaught, and they are helping Ukrainians reclaim territory in the east.

Meanwhile, Belarusian civilians have established efforts to prevent their country from entering Russia’s war. One notable example was seen when rail workers hacked the Belarusian railway network to prevent Russian troops from entering Ukraine. Moreover, some Belarusians even neutralized a railroad connection between Belarus and Ukraine by removing train tracks, delaying the deployment of Russian military equipment and supplies into Ukraine. Given the ongoing Ukrainian counteroffensive and the recent sabotage efforts orchestrated by some Belarusian civilians, the Russians have now lost their positioning in northern Ukraine, and the initial three-front invasion has now turned into a two-front war.

Finally, Lukashenko is still wary of the Belarusian opposition. Since the Belarusian protests in August 2020, Lukashenko has continued to crack down on the opposition movement. The Belarusian government has made hundreds of arrests, and it has even threatened opposition members with the death penalty. But Lukashenko also understands that most Belarusians oppose the Russian invasion of Ukraine. If Lukashenko joined Putin in his unjust and unprovoked war, he would spark further outrage in Belarus. The opposition movement would likely grow, and new forms of government resistance would emerge. While the Belarusian president depends on Russia for his survival, he is also determined to hold onto his power. Lukashenko has acknowledged Russia’s invasion has not gone “according to plan,” and he will not want to risk further political unrest in his country, as it could see him removed from office.

Now, as the Russian invasion enters its fourth month, Belarus appears to be stuck with only bad options. Lukashenko has allowed Putin to use Belarus as a staging ground for the Russian invasion, but the Belarusian president has also called for an end to the war. Lukashenko is aware of the tremendous losses Russia has amassed during the unjust invasion, and he does not want Belarus to suffer a similar fate. Recent polls indicate that the Belarusian people are vehemently against the war. Therefore, fearing the backlash of a potential Belarusian invasion of Ukraine, and determined to hold onto his power by whatever means necessary, Lukashenko will attempt to avoid an invasion. The decision may just help him keep his job, for now.