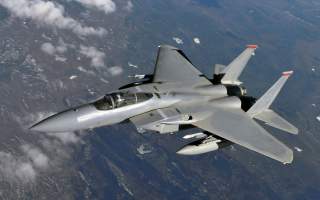 What makes the F-15C uniquely suited for the Baltic Air Policing mission is its capability to detect, acquire, track and intercept opposing aircraft while operating in friendly or rival-controlled air space.

With the U.S. Air Force (USAF) assuming the lead of NATO‘s forty-fifth rotation of air policing operations, and the fifth rotation for the U.S., the instrument of peace for America since Sept. 2008 has remained the same; the F-15C Eagle.

The Eagle is a combat proven, tactical fighter designed to permit the USAF to gain and maintain air superiority over the battlefield. As told by Tech. Sgt. Matthew Plew, 48th Fighter Wing Public Affairs, in the article Eagles safeguard Baltic sovereignty, the F-15C can outperform and outfight any current opposing aircraft, giving NATO the strategic access critical to meet Article 5 commitments and to respond to threats against its Allies and partners.

“Big picture, we’re ensuring our strategic partnership with our Baltic allies by protecting the sovereign skies above the Baltic states,” said USAF Lt. Col. Clint Guenther, 493rd Expeditionary Fighter Squadron detachment commander. “Our contingent is on alert twenty-four hours a day, seven days a week to ensure we are fulfilling that commitment.”

What makes the F-15C uniquely suited for the Baltic Air Policing mission is its capability to detect, acquire, track and intercept opposing aircraft while operating in friendly or rival-controlled air space.

The 493rd Expeditionary Fighter Squadron pilots in fact can detect and track aircraft and small high-speed targets at distances beyond visual range down to close range, and at altitudes down to treetop level.

“When the Combined Air Operations Center, monitoring the Baltic skies in Germany identifies an aircraft that is not squawking [talking to regional air traffic control] or on a registered flight plan, they notify the wing operations center here in Siauliai, who alerts us to respond,” Guenther said. “From that moment, we are airborne within fifteen minutes of that notification to interrogate that aircraft.”

F-15C Eagles can be configured with air-to-air weaponry such as the AIM-120 AMRAAM missile on its lower fuselage corners and the AIM-9X Sidewinder or AIM-120 missiles on two pylons under the wings, along with an internal mounted M-61A1 Vulcan 20mm, six-barrel cannon with 940 rounds of ammunition in the right wing root, allowing it to provide all-weather, day or night air superiority.

To date, seventeen NATO countries have shared the air policing mission in the Baltic region since operations began in April 2004.