Why Russia Still Holds an Advantage in the Rapidly Melting Arctic 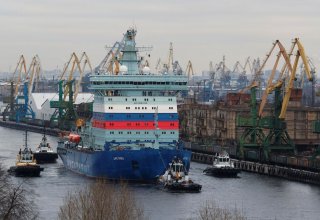 The Russian Deputy Foreign Minister issued some threatening statements about his countries’ willingness to defend its national security interests in the Arctic, should anyone try to “test its readiness.”

Russia’s TASS news service quotes Sergei Ryabkov as saying that the, “Arctic can still be maintained as an area of cooperation,” but that Russia “will not in any way stay quiet though if someone…would try to test our readiness to defend our interests interests of national security in this area.”

There has been much discussion about growing competition for resources and territory in the Arctic in recent years, particularly given the scientific realization that the ice is melting much faster than anticipated. Melting ice opens up new waterways and radically changes the operational context for the region, which has long been of interest to many great powers.

“The Arctic is warming twice as fast as the rest of the globe. While significant uncertainty exists in projections for Arctic ice extent, the current scientific consensus indicates the Arctic may experience nearly ice-free summers sometime in the 2030’s,” the U.S. Navy’s 2009 Arctic Road Map states.

Interestingly, an update to the Navy’s Arctic Road Map from several years ago addresses a pressing need for “mission readiness,” including discussion of a need for more ice-breakers and a large-scale increase in Arctic deployments. The document also discusses various research efforts to further ruggedize Navy ships for Arctic conditions. For example, ONR scientists have been looking at warming ship hull coatings able to melt through ice as well as various techniques designed to enable weapons and sensors to function in an Arctic environment.

These efforts include technologies that allow weapons and sensors to better operate in an arctic environment and using special gear to “knock” ice off of the superstructure of a surface ship. This could also include working on technologies to build heating elements into the superstructure of the ship itself, Navy officials said. At one point in recent years, Navy submarines conducted wargames firing torpedoes under Arctic ice in preparation for a potential confrontation.

The 2009 Arctic Road Map also includes discussions of search and rescue, maritime security, C4ISR, cooperation with the U.S. Coast Guard, strategic sealift and strategic deterrence, among other things. Updated Arctic Road Map that explains how increasing water temperatures and decreasing ice layers mean the service will need to increase the number of ships in the region over the next 20 years.