Why Is a Russian Naval Fleet Gathering Near Syria? 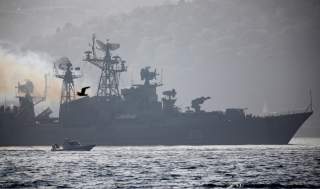 In late August 2018 Russia launched a naval deployment in the western Mediterranean off the Syrian coast. It was Moscow’s biggest such deployment since the end of the Cold War.

The naval moves came shortly after the Kremlin claimed the United States and its Western allies were plotting a new round of attacks on the regime of Syrian president Bashar Al Assad.

In April 2017 and a year later in April 2018, U.S. forces struck Syrian targets in response to regime chemical attacks.

Moscow in turn claimed that the jihadists who control Idlib are planning to stage a “false-flag” chemical attack and blame it on the regime in order to give the West a pretext to attack it. Conspiracy theories pertaining to alleged false-flag uses of chemical weapons are common in the state-run Russian press.

Russia also warned U.S. and Western powers against interfering in the Idlib operation. “We have facts on the table and have issued a strong warning to our Western partners through our defense ministry and our foreign ministry not to play with fire,” Russian foreign minister Sergei Lavrov said at a press conference alongside his Syrian counterpart Walid Muallem.

It’s against this backdrop that Russia is flexing its naval muscles off Syria’s coast.

“I suspect there’s a lot of P.R. here, and the influx of Russian ships has more to do with planned operations against Idlib,” said Michael Kofman, a fellow at the Wilson Center’s Kennan Institute. “It is also possible that they intend a large-scale demonstration of fires in conjunction with the upcoming operational-strategic exercise.”

The size of the naval force – more than a dozen vessels including destroyers, frigates and submarines, some armed with Kalibr cruise missiles – also demonstrates that this “deployment is mainly, but not only for military drills,” said Kerim Has, a Moscow-based analyst on Russian and Turkish affairs.

Has said Russia needs more time to establish supporting infrastructure to sustain “a permanent presence of such a huge flotilla there” since its efforts to expand its naval depot in Syria’s Tartus port “is still an ongoing process.”

The deployment’s other purpose is to deter U.S. attacks on regime forces.

“Russia likely aims to create a shield with its navy and air forces against possible strikes of the U.S. air and submarine forces in the region,” Has said, adding that he does not anticipate “a direct military clash between the two.”

Timur Akhmetov, a Middle East researcher at the Russian International Affairs Council, said he thinks the Russian deployment represents a deterrence “against any interference of Western powers in Syria.”

“Another point is that any stand-off may be used to show that Russia is there to stay and the ability of Western players to impose any decision by force is declining,” Akhmetov said. “In other words, Russia wants to push the competition from military into political realms by showing that for every Western military step there is an effective countermeasure.”

Kofman also suggests that Russia may have sent in additional forces in preparation for “a provocation.”

“Many may not recall but there was a significant attack against Russian forces in Syria during the time of their Zapad exercise in September 2017,” Kofman said. In that attack, jihadists advanced on Russian forces in Idlib and “threatened to encircle and overrun Russian positions.”

Moscow responded by intensifying air strikes against Idlib, bringing an end to a six months of Russian-brokered ceasefires.

It remains unclear just how many of the Russian naval assets in the Mediterranean will simply participate in the drill and return home, or are there to support a regime offensive in Idlib. Has noted that the drills are set to continue until Sept. 8, the day after Turkish, Russian and Iranian leaders will convene in Tehran to discuss the Syria situation.

“It’s less likely that Syrian army’s Idlib offensive will start before this summit,” Has said. “So some of the Russian warships probably will leave the region after the military exercises, or at least they will stay there on a rotational basis.”

Furthermore, Russia could heavily rely on air power in the Idlib offensive. Has noted that the number of Russian aircraft deployed to Khmeimim air base near Damascus has “also increased as the drills are going to start soon.”

“Russia may also be aiming to strengthen its military presence in Syria before an Idlib offensive starts by drawing attention from Idlib to the drills in eastern Mediterranean,” Has said. “So it can be assumed that some part of this recently increasing military presence will continue to stay in the region even after the drills as an additional force that may be used during an Idlib offensive.”

More broadly, Has said he believes Russia is taking another opportunity to test its various weapon systems in a real war zone.

“It’s important to project its military power abroad for beefing up Russian weapons’ P.R. and prestige as a returning great power in the Middle East and Eastern Mediterranean regions having huge energy reserves,” Has said. “In that context, it makes sense why the Russian Northern, Baltic, Black Sea fleets and the Caspian Flotilla are participating with the aerospace and air forces in the eastern Mediterranean drills.”

“That’s surely far beyond giving a symbolic message to the U.S. and Western powers, but aiming to attract much attention of the regional ‘clients’ to the Russian-made strategic bombers, fighters, warships, S-400 missiles and so on.”